Leader of the Pack: Brian Gutekunst’s path from UW-La Crosse to general manager in Titletown 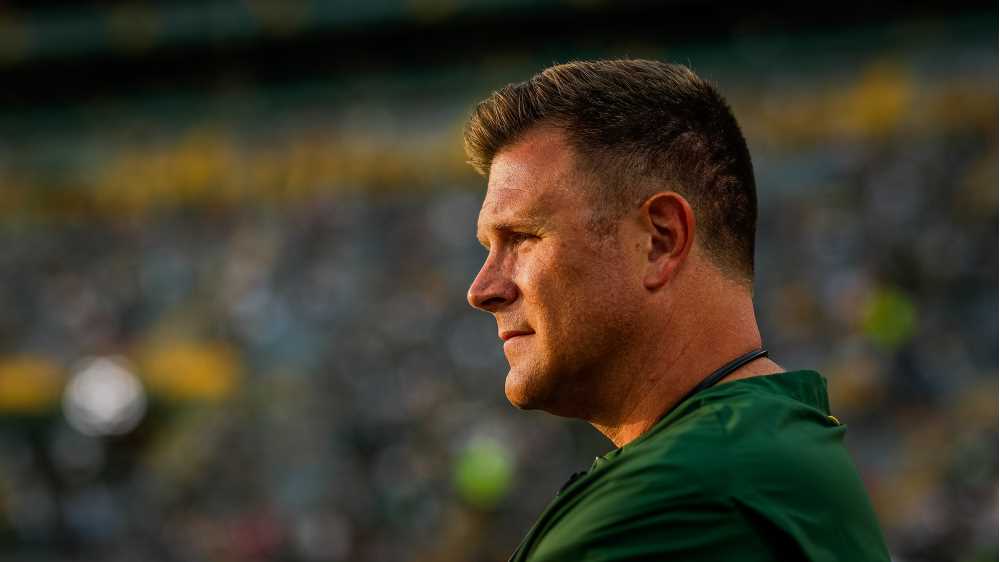 UW-La Crosse alum Brian Gutekunst is entering his fifth season as general manager of the Green Bay Packers. His time at UWL, including a stint as a student assistant football coach, was crucial to his development as a talent evaluator. PHOTO CREDIT: Evan Siegle, packers.com

In 1994, a shoulder injury seemed to spell the end of Brian Gutekunst’s time with the UW-La Crosse football team.

Coach Roger Harring had other ideas.

“It was evident my career as a player was over. I was thinking about transferring to a school in North Carolina, so I could be closer to family,” Gutekunst says. “Coach Harring told me I wasn’t leaving, that I owed him. So I came back to help him coach and recruit. It was the biggest turning point in my life.”

Harring’s encouragement and Gutekunst’s loyalty paid major dividends — some of which continue to be seen nearly three decades later, at the highest level of the sport.

The Eagles went 14-0 in 1995, a dominant season capped by a 36-7 rout of Rowan University in the NCAA Division III National Championship Game.

Gutekunst thrived as a coach and recruiter, cultivating skills that led to a scouting internship with the Green Bay Packers and, ultimately, his rise to general manager.

Now, after playoff heartbreaks the past few years, the former UWL student assistant coach is determined to bring the Lombardi Trophy back to Titletown.

A blessing in disguise

Like personality or eye color, a fixation with football is coded in Gutekunst’s DNA.

His father, John Gutekunst, played defensive back for Duke University and went on to coach for a half-century, including seven seasons leading the Minnesota Golden Gophers.

“Growing up around football, and around competition in general, just made me fall in love with it,” Gutekunst explains. “I learned a lot by osmosis, being around my dad. I grew up in football offices and locker rooms. I knew pretty early that I wanted to do something in sports.”

Working in Minnesota in the late ’80s and early ’90s, the older Gutekunst had taken notice of a Division III powerhouse just across the Mississippi River.

When his son expressed interest in playing college football, UWL was a natural fit.

“My dad knew Coach Harring vaguely and knew about the program. They had had a ton of success,” Gutekunst remembers. “I drove down there one day and met with Coach Harring. It was my first time in La Crosse, in the summer, and it was beautiful. From that moment, I was hooked.”

Gutekunst jokes that he was hardly a standout on the gridiron, although injuries played a significant role.

A defensive back like his father, Gutekunst twice had reconstructive surgery on his shoulder. Eventually, the injury was too much to overcome. It forced him off the field for good.

Harring, recognizing his knack for the game, gave him plenty of opportunities to learn from the sidelines.

“He was a very outgoing and confident young man. He knew exactly where he wanted to go in the career field of football,” says Mike Anderson, UWL’s current associate head football coach. “His greatest talent and love of the game was the evaluation of a player’s skill level. He had a unique ability to evaluate the skill set of a prospective player and the level where this individual would succeed.”

“Working under Roger Harring, (Defensive Coordinator) Roland Christensen and the other coaches on the staff really helped me develop a passion for coaching and recruiting,” Gutekunst adds. “I look back on all the fabulous mentors I had, and it was such a blessing.”

The Eagles followed their national championship with strong campaigns in 1996 and 1997, Gutekunst’s final season with the team.

That year was significant for another reason. During a group project in one of his courses, Gutekunst met the woman who would become his wife.

Jennifer (Banda) Gutekunst, ’98, was a four-year letter winner on the women’s soccer team. Despite the fact they shared a major — exercise and sport science: sport management — the pair didn’t cross paths until their senior year.

“UWL gave me so many things,” Gutekunst says, noting the couple now has four children. “It was a huge part of my development not only professionally, but as a person.”

In 1997, after two years coaching for the Eagles, Gutekunst was looking for a new challenge. Harring recommended him for a highly competitive scouting internship with the Packers.

He got the job.

During his internship with the Packers, Gutekunst was half scout, half sponge.

He absorbed everything he could from General Manager Ron Wolf and his esteemed staff of lieutenants, which included future NFL general managers Ted Thompson, John Dorsey, John Schneider, Reggie McKenzie and Scot McCloughan.

A year later, Gutekunst followed Schneider to the Kansas City Chiefs but was soon back in Green Bay as a full-time scout.

Gutekunst’s time on the road allowed him to bolster his résumé while gaining a deeper understanding of how to manage a football team.

“Being on the road 180 days a year gave me a great education — just being at these major schools and seeing how their programs are run,” he notes. “It was a wonderful time in my career, and it was really the foundation for how I approach my job.”

In 2012, a year after the Packers’ victory in Super Bowl XLV, Gutekunst was promoted to director of college scouting.

Four years after that, he was named director of player personnel.

Two years after that, Gutekunst was at George Bush Intercontinental Airport in Houston, on his way to interview for the Texans’ general manager position, when he received a phone call.

It was the Packers, asking if he would return to serve as the team’s general manager.

“I don’t know if it hit me right away,” Gutekunst says. “From the moment I started working with the Packers, I always felt this humbling experience of what the organization is — the history of it and my role in keeping that going. That’s what is special about this place. You feel that weight and responsibility. This is the cornerstone franchise of the National Football League.”

And he was being handed the keys.

While UWL provided Gutekunst a solid foundation on which to build his career, there was one thing he left unfinished.

UWL’s exercise and sport science program required a capstone internship. Because Gutekunst began his internship with the Packers before he had completed the program, the internship wasn’t recognized by the university, and he never received his degree.

Gutekunst reached out to UWL in 2016, hoping to change that.

UWL worked with the Packers to create an internship within the framework of Gutekunst’s then-role as director of player personnel. The 560-hour internship required Gutekunst to submit timesheets and quarterly reports tracking his progress — something that could have seemed beneath someone of his professional experience.

“I’ve had conversations with people looking to finish their degree where they say, ‘This is a hassle. Do I really need to jump through these hoops? Can’t I get credit for the work I’ve already done?’” says Guy Herling, academic services director for the College of Science & Health. “Brian was a class act through the entire process. He was willing to do whatever it took, which was impressive because of his high-ranking position with an NFL franchise.”

By December 2016, Gutekunst had completed his internship and received his degree. That moment was heavy with meaning, he says, for several reasons.

“It was very important to my mother — it meant a lot to her,” Gutekunst notes. “It meant a lot to me, too. The time I spent at UWL, with Roger and Roland and everyone else, was very influential for me. To earn my degree and make that a more permanent thing, that was really special.”

With four seasons under his belt, Gutekunst says he feels increasingly comfortable as general manager.

He leans on his experiences from UWL and his two-plus decades with the Packers. He is also quick to credit his staff.

“Evaluating players is difficult. There’s much more art to it than science,” he says. “We have a great personnel staff that puts a ton of work into it. At the same time, players are human beings. And human beings react differently when put into different environments. You never really know how a player will react until you get him out there.”

Over the past year in particular, managing the team has meant managing relationships.

Last offseason, Aaron Rodgers’ frustrations with the front office boiled over into a months-long media storm in which Rodgers and Gutekunst were often painted as adversaries. Many fans and reporters blamed Gutekunst for running the future Hall of Fame quarterback out of Green Bay.

Through it all, Gutekunst remained focused on molding the Packers into a Super Bowl contender. When Rodgers ultimately returned to the team, Gutekunst made a concerted effort to reconcile their differences.

By the end of the 2021-22 season, things had improved so much that Rodgers openly praised Gutekunst for not only constructing a competitive team, but being willing to enhance communication and grow their relationship.

Gutekunst’s humility, paired with his ability to concentrate on what he could control, helped him turn a potentially messy divorce with the team’s star quarterback into an opportunity for growth.

“For the most part, you continue to focus on what matters, which is building the team,” he explains. “I also think conflict can be a good thing if you approach it the right way. It can lead to more trust and strengthening of bonds. It was difficult, no doubt. But it was also something our team needed to go through.”

With Rodgers back for another season, and with a deep supporting cast that has helped the Packers secure a top playoff seed the past two years, Gutekunst hopes this is the year they get over the hump.

He has proven he can build a winning team. He has shown he can regain the trust of his MVP quarterback. Now, there is one more step to take.

“If you look back over the past three years, we’ve had good football teams that have accomplished a lot, but we have to play better in those big moments,” Gutekunst says. “The competitive aspect, for me, is the most enjoyable part of it. Whether it’s our coaches, players, scouts or anyone else in the building, everyone is focused on one goal, which is winning a championship.”