Efforts to enhance Lake Michigan and its tributaries, wetlands and waterfront communities are creating hundreds of jobs and injecting more than $35 million into the economy of southeast Wisconsin.

Those are among the findings of a University of Wisconsin-Whitewater study that analyzed the economic impact of projects funded by the Fund for Lake Michigan (FFLM).

Projects have turned more than 70 miles of degraded waterways into popular locations for fishing and other recreation; restored 100 acres of wetland, creating high-quality habitat and reducing flooding downstream; revitalized 25 public parks and waterfronts; transformed polluted and neglected land into parks and sites for new development; and advanced locally developed technologies and products to reduce flooding and keep polluted runoff from entering waterways.

Economists from UW-Whitewater’s Fiscal and Economic Research Center calculated that, as a whole, FFLM projects have created more than 480 full-time jobs, providing employees with $13 million in labor income. The funds stimulated the economy with $35 million in economic output and increased property values by $45.5 million.

“It’s clear that grants awarded by the Fund for Lake Michigan are investments that pay dividends,” said Russell Kashian, UW-Whitewater professor of economics and co-author of the study. “Not only are there measurable financial benefits, there is also the social impact of clean water. It enhances the quality of life in southeast Wisconsin that, in turn, attracts homeowners and businesses.”

Money awarded by FFLM also serves as a catalyst for additional investment in the community, said Linda Reid, director of UW-Whitewater’s Institute for Water Business, and co-author of the study.

In the last three years, FFLM grantees raised $35 million from private and public sources for their projects, including $12 million in federal funds or non-Wisconsin funds.

“Awardees are leveraging the funds to gain more money to have a greater impact,” Reid said. “From cleaner beaches to public park improvements, the benefits are enjoyed by many. A cleaner Lake Michigan spurs economic development, creates jobs, enhances recreational opportunities and increases tourism.” 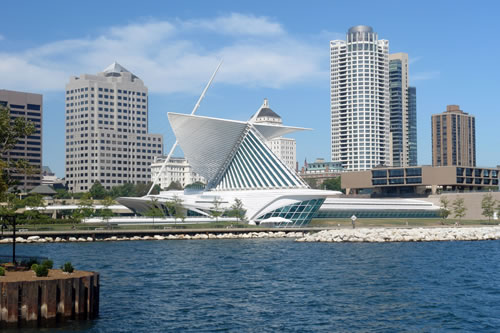 Lake Michigan was part of the inspiration for architect Santiago Calatrava when he designed this iconic addition to the Milwaukee Art Musem. Calatrava later said that the design “responds to the culture of the lake: the sailboats, the weather, the sense of motion and change.”