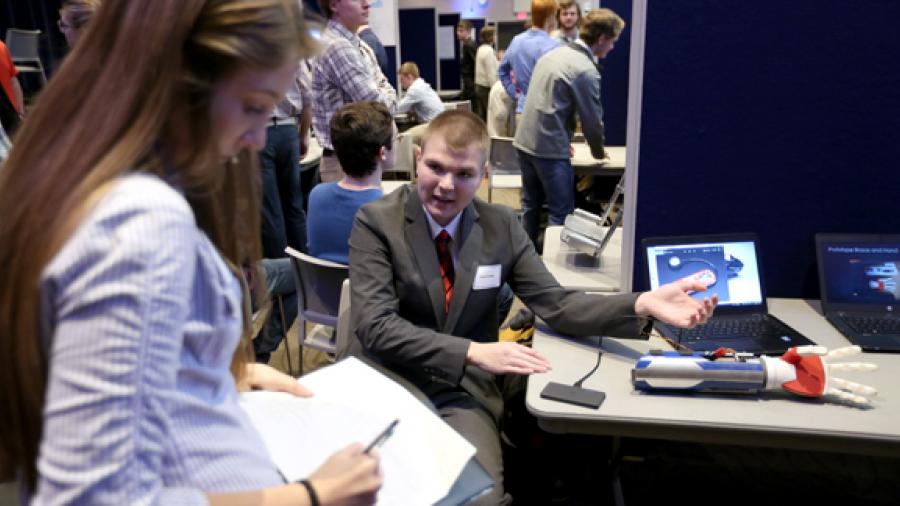 Some University of Wisconsin-Stout students may well have taken the first steps toward finding a way to turn whey, largely a dairy waste product, into ethanol to make vodka.

Students searched Sweetland Dairy Farm in rural Menomonie to find a wild yeast that would ferment whey to ethanol. They used research techniques to take swabs around the farm and found a yeast that they named for two of the students. The yeast, 5-ckad-1, is named for students Connor Kesler, a senior environmental health major from Hortonville, and Aaron Doering, a junior majoring in biochemistry and molecular biology from St. Paul. Rachel Meyer, a junior majoring in dietetics from Eyota, Minn., also was part of the project.

Whey protein is used in some products like protein bars and shakes, but the rest of the whey is a waste product, Kesler said. Finding a use for that waste product would create value for local dairies, he added.

One yeast is known to ferment whey, breaking down the lactose, but the 5-ckad-1, does a better job, Kesler said.  “We had to do a lot of our own research,” Doering said. “We were entering some new territory.” 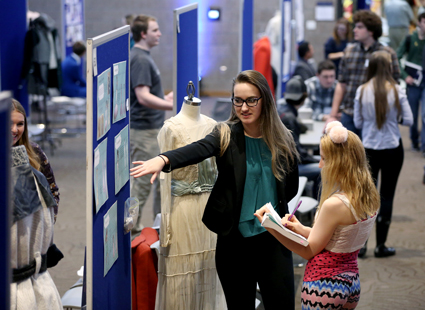 Sofia VanTassel, an apparel design and development major, explains her research on the history of clothing at the STEMM Student Expo Dec. 14, 2017, at UW-Stout.

Now that the yeast has been found, the next steps would be to determine if an ethanol product could be made that is palatable and a viable product, Meyer said. The research was done for the General Microbiology class.

The project was one example of research at UW-Stout’s STEMM Student Expo on Dec. 14, in the Memorial Student Center. About 115 projects by more than 370 students in the College of Science, Technology, Engineering, Mathematics and Management were featured.

Chuck Bomar, dean of the STEMM College, said the research displayed by students is the core of the polytechnic experience at UW-Stout, Wisconsin’s Polytechnic University.

“These are real-time problems in engineering, science, computer science and mathematics,” Bomar said. “Research is being embedded in the curriculum. We’re not just taking an idea out of a manual. These are not artificial experiences. We’re teaching the students how to research and how to solve problems.”

That experience is relevant as students enter the workforce and have to research questions and find answers — and in some cases even realize that scientists don’t have all the answers, Bomar said.

Having to explain their research during the expo helps students learn to communicate, Bomar said. 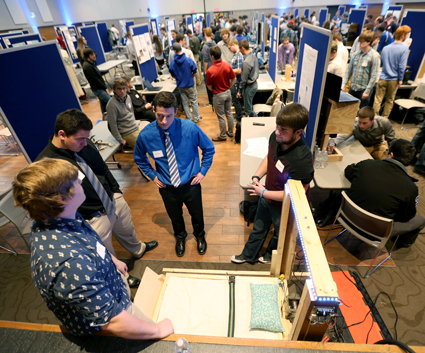 The STEMM Student Expo at Dec. 14 at UW-Stout featured 115 projects by more than 370 students.

“That is always one of the criticisms of STEMM is students don’t know how to communicate,” Bomar said. “These students become experts at communicating scientific data. Making presentations is something they will do in the real world. Even the best idea, if you can’t communicate it, is not going to be supported.”

One research project, Technicolor Radishes, focused on which color of light helps germinate and grow radishes the fastest.

Radish seeds were picked because they usually germinate in five to 10 days. The experiment was simple to do using paper towels, seeds, plastic colored sheets and a light source. “Red grew the best,” Tabler said.

This could be important information for starting seeds and growing radishes, Wellman said.

Doing research as first-year students is valuable for her education, Tabler said. “The act of doing the experiment was helpful,” Tabler said. “We had to figure out how to do the research.”

Anna Finnegan, a freshman majoring in mechanical engineering from Minneapolis, demonstrated the Claw, a device that helps those without grip strength to grab items. With a push of a button, the Claw would close around items, eliminating the need for a hand-driven reacher that requires the ability to squeeze a lever, she said. The project was developed for the freshman-level class Impacts of Engineering.

Fellow freshman Nate O’Neal, a mechanical engineering major from Grafton, was part of a project that developed a backpack umbrella, which had an umbrella that emerged from a backpack, freeing up the wearer’s hands. It was a project for Impacts of Engineering as well.

Westerlund’s grandfather uses a wheelchair. “The biggest thing is he can’t turn around to see,” Westerlund said.

The sensor, much like a vehicle back-up alert, emits a tone when the wheelchair is getting close to anything. Westerlund plans to take the sensor and let his grandfather, Don Johnson of Minneapolis, try it.