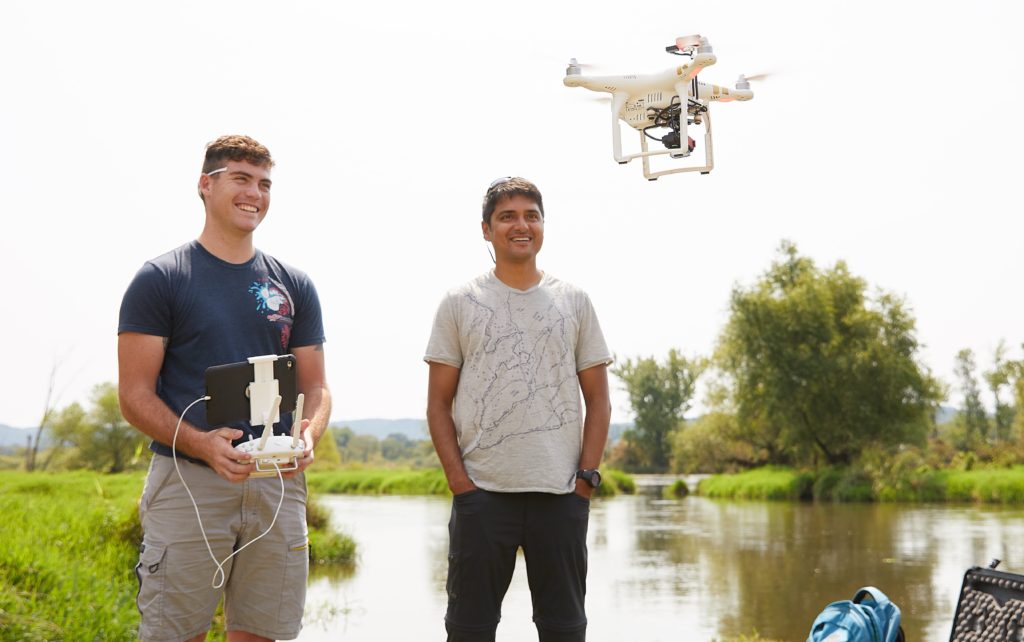 For more than a decade, members of the Brice Prairie Conservation Association have been releasing beetles to control the spread of an invasive flowering plant that is degrading regional wetlands and with them, wildlife habitat.

The BPCA is attempting to stop Purple Loosestrife across selected areas of Brice Prairie and the Lake Onalaska area, in cooperation with the U.S. Fish and Wildlife Service and the Wisconsin Department of Natural Resources.

Unfortunately, tracking whether their efforts are making a measureable impact on the invasive species is difficult without wadding across marshland and lakes to physically locate the plant and measure density.

That is, until now. 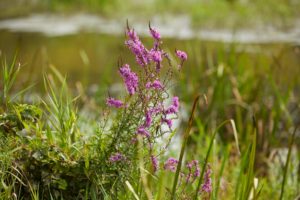 Purple loosestrife is an invasive species various organizations are partnering to combat in the area.

UW-La Crosse student researcher Zach Woodcock received a summer research grant from the BPCA to use drones to conduct aerial surveys of Purple Loosestrife in collaboration with the organization. The UWL senior has learned how to operate the drones, as well as how to process the data and create maps for loosestrife identification and more. He has received help from his UWL faculty mentor, Niti Mishra, an expert in using drones for remote sensing.

“Since drones are just starting to be used for things like this, there is a lot of opportunity here,” says Woodcock, who envisions a future career involving remote sensing. “This is a great opportunity for me to be getting experience with it.”

Over the last decade, drones — unmanned aerial vehicles that originated in the military — have seen immense technological developments and become more affordable, providing a variety of new applications from analyzing crop health to generating climate data. Using them for environmental monitoring and land management is an emerging and exciting field, notes Mishra.

Mishra, a UWL assistant professor of Geography & Earth Science, aims to find more partnerships with the university and in the community to assist with such drone applications while establishing himself and his students in the field.

“If you mix the talent of the community and the talent of the university, you can get a lot of really good stuff done,” says Marc Schultz, a member of the BPCA who is working with Mishra on the loosestrife project. “Mixing those talents embodies the Wisconsin Idea.”

During a drone test flight at the La Crosse River Delta near Bangor, Wisconsin, yellow lights flashed and the drone’s mini propellers began to spin. The device lifted straight up 150 feet into the air hovering above the waters, collecting images of Purple Loosestrife that would be difficult and time consuming to get by foot. 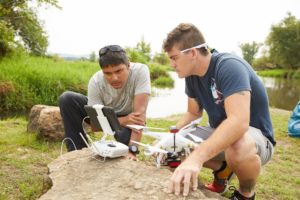 Niti Mishra, left, a UWL assistant professor of Geography and Earth Science, has a license to fly a drone up to 400 feet. This one is capable to flying up to 1,600 feet. Mishra is pictured with UWL senior Zachary Woodcock who is learning to fly drones while assisting a local organization with invasive species monitoring with help from Mishra.

Mishra explains that the most important part of the drone is its powerful cameras, including one that captures near-infrared wavelengths that the human eye cannot see. That will allow them to clearly distinguish the invasive plant from other kinds of vegetation. Data collected from the drone is analyzed using computer software to map and characterize not only the invasive species, but also information such as vegetation moisture stress, productivity, height and density.

The amount of data Mishra can collect and its accuracy is immense in comparison to even a few years ago, he explains. When he was in graduate school in 2010, his dissertation was related to detecting bush encroachment in savanna ecosystems of Kalahari in southern Africa. At the time, affordable, high-tech cameras that could be integrated with smaller drones were still under development. So, Mishra used satellite images and ground data developed image analysis methods for semi-automatically detecting invasive plants. Those satellite images; however, could contain cloud cover and lacked the resolution or pixel size detail the drone acquired imagery can provide, he says.

When Woodcock’s summer research project was complete, results of the drone aerial shots were shared with the BPCA. The organization was impressed with the quality and utility of the results, and will continue to partner with Mishra to monitor again in future years and measure changes in the amount of Purple Loosestrife. If the organization finds progress with the beetles, it will be able to share the information with other land management agencies working to combat invasive species, says Schultz.

“There is no comparison to this technology — you see how easy it is to observe just what you are looking for,” say Schultz.