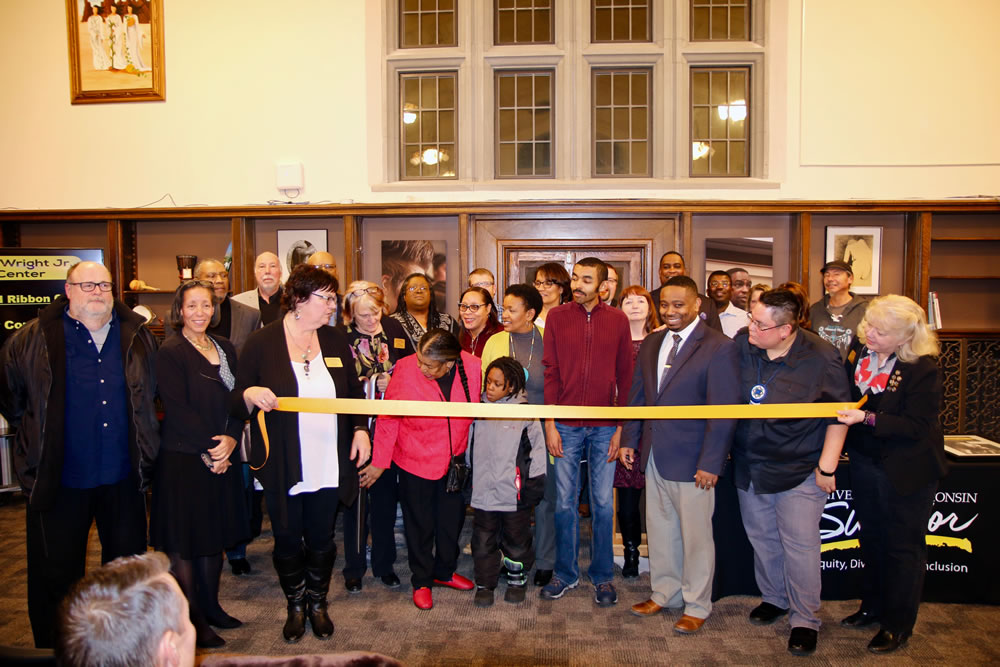 Preparing to cut the ribbon at the naming and dedication ceremony for UW-Superior’s William “Pope” Wright Jr. Student Center, which was held Nov. 28 in the recently refurbished space in Old Main, formerly known as the Multicultural Center.

The naming and dedication ceremony for the William “Pope” Wright Jr. Student Center was held Wednesday, Nov. 28, in the recently refurbished space in Old Main, formerly known as the Multicultural Center.

The room was packed with standing room only as current and former students, staff, faculty and community members gathered to honor the beloved former UW-Superior professor and artist and to dedicate the center. The goal of the center is to provide a welcoming space and programming for underrepresented minority students on campus.

“After the space renovation, what was laden with heavy green drapes is now open and light and bright,” said Chancellor Renée Wachter. “Who better to name this space after than for a man who served as a pioneer and beacon for the campus, for the community, and for students. Pope Wright was in many ways a bright light. His legacy will lives on and will for generations to come. The Wright Center will continue to be a gathering space, a place for creativity and connection.” 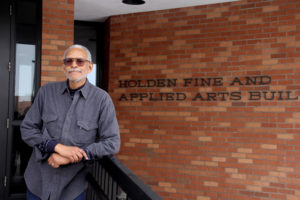 Wright was a member of the campus community for 44 years and the first African-American professor at UW-Superior.

Wright began teaching at UWS in 1971, and was a member of the campus community for 44 years. He was also the first Black Student Union faculty advisor and Indian Student advisor on campus, and the first African-American professor at the university.

In 1983, he was named the director of the Minority Affairs Office, and was known for always finding time for students of all backgrounds and cultures.

“He used to stop and ask everyone how they were and then stand long enough to actually hear. And I think in that way people felt a connection to him and a certain level of authenticity from him and his character,” said Wright’s niece Pamela Bozeman.

The dedication program included remarks from alumni Carl Crawford and Kim Young, and former directors of the Office of Multicultural Affairs, Chip Beal and Ivy Vaino, all of whom worked alongside Wright to create the groundwork for diversity and inclusion at UWS.

“We just want this to be a resource to the community and our campus, and provide a space where underrepresented minority students feel like they can come and be themselves,” said Jerel Benton, UWS Director of Equity, Diversity and Inclusivity.

Also in honor of Wright, the UW-Superior Foundation has established the Pope Wright Memorial Scholarship in support of underrepresented minority students, particularly African American or Native American students. Gifts can be made online at uwsuper.edu/give.