Menomonie, Wis. — Six students from east-central Wisconsin have made their mark in education on the other side of the state.

They are the first to graduate from University of Wisconsin-Stout — about 225 miles away in west-central Wisconsin — as part of a degree-completion program coordinated through Northeast Wisconsin Technical College in Green Bay and UW-Fox Valley in Menasha.

The program, which started in 2008, allows students with two-year degrees to finish, mostly online, their Bachelor of Science in manufacturing engineering at UW-Stout.

The graduates are Ryan Boehm, of New Franken; Tiffany Darnick, of Greenville; Mackenzie Kozelek, of New Franken; William Seidler, of Mountain; Bradley Wachtel, of Manitowoc; and Gretchen Wilson, of Algoma.

They were part of a contingent of 29 students earning manufacturing engineering degrees at commencement May 11 at UW-Stout. A total of 1,382 UW-Stout students received degrees in undergraduate and graduate ceremonies.

Prior to graduation most of the six students had been to UW-Stout a few times but only briefly.

As program pioneers, the students said there were kinks in the system, but they also said they saved considerable expense by being able to live close to home and work full or part time while pursuing their four-year degree in a field that’s in high demand.

A UW-Stout survey released in February found 100 percent employment for 2011-12 manufacturing engineering graduates. Their average starting salary was $52,000. Overall, 97 percent of UW-Stout graduates from 2011-12 had found jobs or were furthering their education. 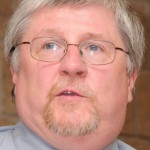 UW-Stout professors weren’t just cyber instructors for NWTC students; they also held monthly classes at NWTC on Fridays and Saturdays. “Due to the fact that many of the students are working in industry as they complete their degrees, in-class times are scheduled around typical student work schedules,” said UW-Stout Associate Professor Lin Stradins, the program director.

Wilson, who has two young children, said she wouldn’t have been able to work on the degree if she had to uproot her family and move to Menomonie for two years. The stay-at-home option is “what did it for me. I had child care built in with help from my mom,” Wilson said.

Kozelek said one of his goals was to get through college debt-free, and the transfer program made that possible. “There were some aches and pains, but that comes with the program being offered for the first time,” he said.

Kozelek already is working full time as an engineer for Alliance Laundry Systems, of Ripon, the world’s largest maker of commercial laundry systems.

Wachtel, who has an engineering job with Oshkosh Truck in Oshkosh, said the group sometimes had to wait for classes to be offered but that UW-Stout professors provided good online support. He had been to UW-Stout just one time prior to commencement weekend. 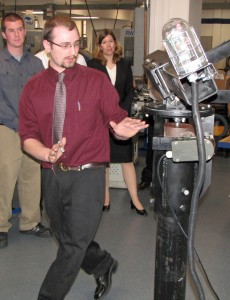 Seidler has landed an engineering job with Marinette Marine, of Marinette, which specializes in building ships for the U.S. Navy.

Boehm had an internship that turned into a full-time position with EMT International, which manufactures paper finishing equipment in Green Bay.

The six students presented a capstone project Friday, May 10, on campus, a day before graduation. Their project, the Photovoltaic Tracker System, was explained via Power Point in Fryklund Hall followed by a demonstration with about a dozen faculty looking on.

The system allows solar panels to rotate and follow the movement of the sun throughout the day, maximizing energy collection. The system has three tracking modes. The top disk assembly can rotate 270 degrees.

“These students didn’t have the advantage of daily contact with (UW-Stout) professors. They deserve some extra credit,” said Mike Lorenzen, one of their UW-Stout instructors.

Students said the system is not financially feasible to produce yet because the cost of solar panels is low, making it less expensive to buy multiple panels and position them to capture the most sunlight. An exception would be if the installation was at a site that restricted the number of panels. Then the system could increase power generation by 40 percent, enough to outweigh the additional cost.

UW-Stout is the only UW System university that offers a degree in manufacturing engineering. For more information, go to www.uwstout.edu/programs/bsmfe.

For information about the NWTC associate degree in manufacturing engineering technology, contact instructor Farris Saifkani at 920-498-5698 or farris.saifkani@nwtc.edu. 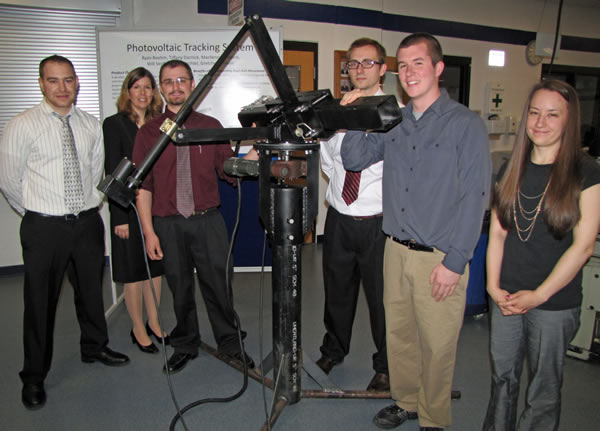 Six students graduated from UW-Stout May 11 through a degree-completion program with Northeast Technical College in Green Bay. They presented a capstone project May 10 in UW-Stout’s Fryklund Hall. From left are Bradley Wachtel, Gretchen Wilson, William Seidler, Mackenzie Kozelek, Ryan Boehm and Tiffany Darnick.