Gar Amunson, superintendent of parks for the City of La Crosse, recalls when an enthusiastic Brantner came into his office with the goal of starting WisCorps more than five years ago.

“You have to go a long way to find someone with that much energy and ambition,” says Amunson. “He’s done it and he’s been very successful.”

Brantner has built the organization from a group of five to a corps of 100 young people today. This summer nearly 100 teens and young adults are planting trees, building bridges, constructing nature trails and more — in all corners of Wisconsin and beyond.

WisCorps has worked on many projects for the City of La Crosse including: invasive species removal from Grandad Bluff, planting trees in the wake of the destructive Emerald Ash Borer and Hixon Forest trail reconstruction. They are building a new Vista Trail, a multi-use trail, which commences in the Hixon Forest parking lot and connects to the Human Powered Trails.

They are also working on a master view of the trail system to place in the Hixon Forest parking lot and indicator signs throughout the forest that display trail names and difficulty.

These are much-needed projects to help the public navigate and enjoy the city’s tremendous recreational resources, says Amunson. But the work is also paid job training for community youth.

“I can’t tell you enough positive things about this group,” says Amunson.

Vermont’s youth conservation corps was the first to change from a state-run to a non-profit organization. Brantner landed a job out of college as a crew leader for Vermont’s program where he got the idea to re-launch Wisconsin’s as a non-profit too. He returned and started a non-profit, WisCorps, in 2009, combining the best ideas from the Vermont program and others.

Brantner wrote letters and solicited donations, collecting $6,000, to buy insurance and equipment to get the first group of five working on projects. His successful grant writing has allowed the group to continue to take on new projects and grow.

The 2005 UW-L graduate attributes his grant-writing ability to a biology class where he learned to write scientific reports.

“I think back to Dr. Rob Tyser’s class and the way he made you carefully choose every word you put on the page,” Brantner says. “Every time I write a grant, I think about that class … and that’s almost 10 years ago now.”

This summer Brantner hired 100 young adults to do 60-70 weeks worth of work for various clients including the National Park Service, the Department of Natural Resources, U.S. Fish and Wildlife Service, land conservancies, non-profit nature organizations and others. Their work spans throughout Wisconsin, and extends this summer to Isle Royale National Park and Indian Dunes National Lakeshore.

Brantner says he often returns to UW-L to present to classes and recruit. Four UW-L students are working for WisCorps this summer.

The group gives participants skills in teamwork, leadership and more — making them more marketable in their future career search, notes Brantner. It’s common for WisCorps participants to go on to be trail crew members for the federal government, wildland firefighters, county recreation department staff and work in other conservation fields.

Ryan Sneath, a UW-L senior, found out about WisCorps when Brantner visited his environmental studies class. He got involved two years ago and will be a crew leader for an Isle Royale National Park project this summer in Michigan. He says Brantner does a good job communicating what WisCorps is about and getting people to work toward its goals. He says WisCorps introduced him to new information, people, places and potential career paths.

“It’s showing me what’s available out there and how to take what I’ve learned at UW-L and apply it,” he says.

UW-L Senior Danielle Kiesow says WisCorps experience has made her more marketable to employers and strengthened her work ethic and love of working hard outdoors.

“Matt’s leadership and WisCorps has influenced me a lot since I started working for it back in 2012,” says Kiesow. “Since then, I’ve realized that I’m much more interested in geography, the environment and conservation than I thought.”

Brantner says the organization needs to grow to meet the needs of young people who need skills for the job market and the project needs across the state.

He remembers his early days leading WisCorps when he’d step away from grant writing to grab his chainsaw and head into the woods to build bridges and groom trails. Today his role is purely administrative, coordinating others. But he says it’s just as satisfying.

“When I’m sitting at the campfire with these young people … I sometimes think that none of us would be here if we hadn’t started this organization,” he says. “What we decided to do five years ago has led to successfully bringing so many people together to make a difference.”

WisCorps is a non-profit conservation corps that employs young people ages 16-25 to do conservation projects on public lands across Wisconsin and beyond. The group also does disaster response and community service. WisCorps headquarters is at 2702 Quarry Road in La Crosse. 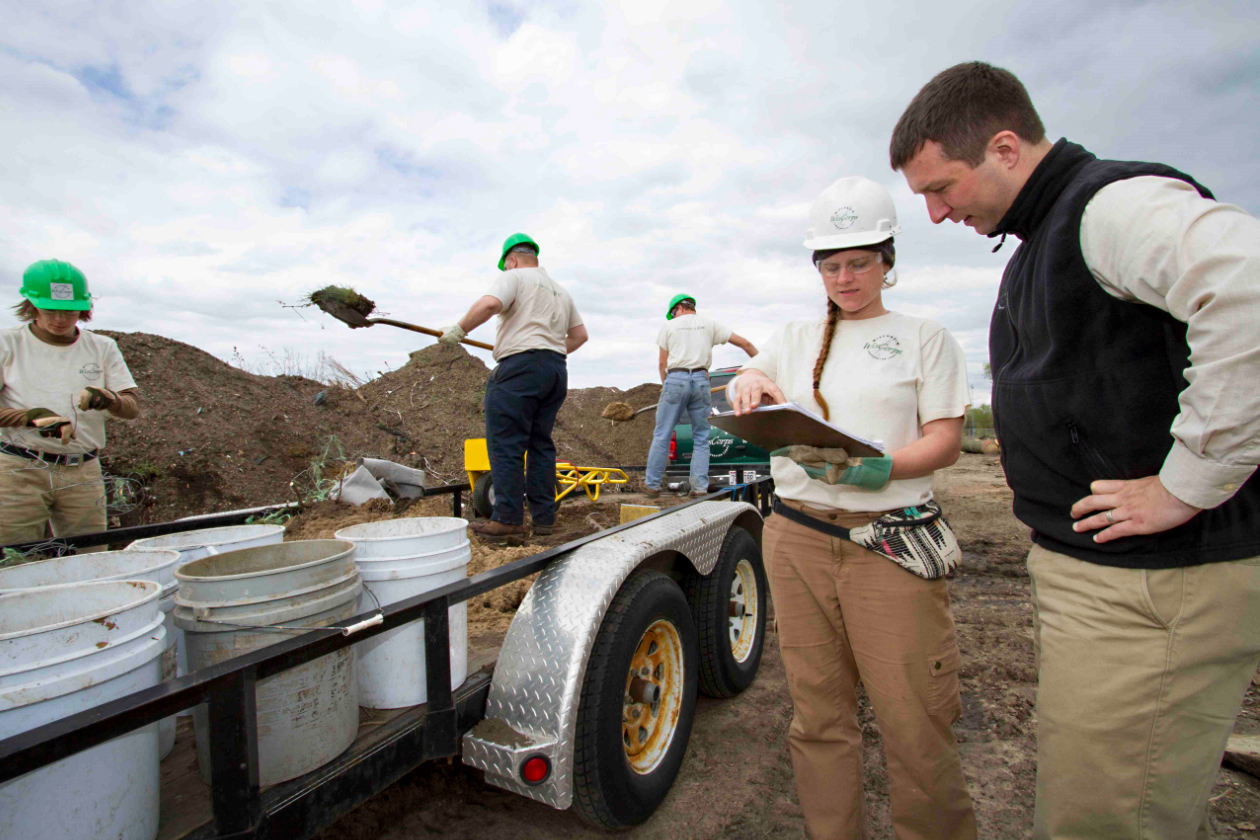 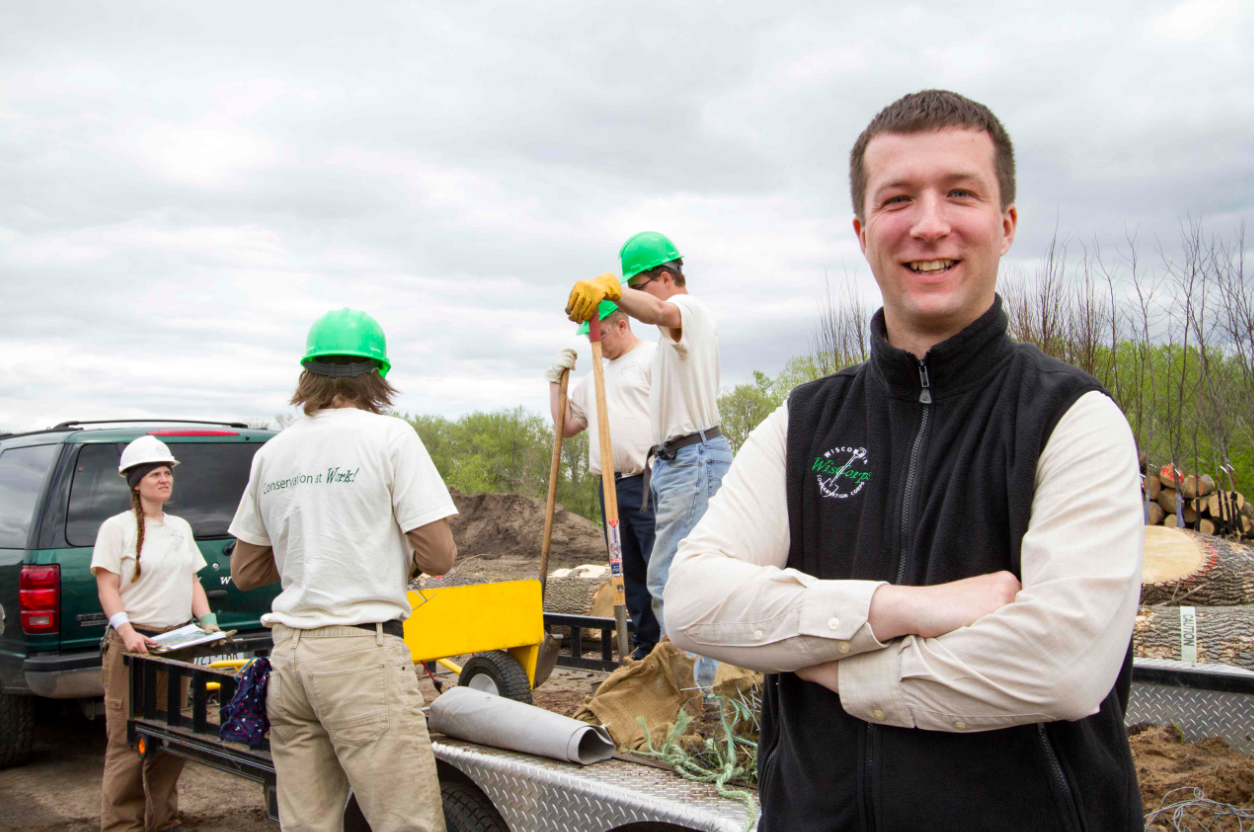 Brantner, ’05, earned his degree in biology with a concentration in environmental science from UW-La Crosse. As founder of WisCorps, he is helping provide conservation work for Wisconsin, as well as job preparation for state teens and young adults