From the other side of the world, girl in Kenya learns computer coding at UW-Milwaukee 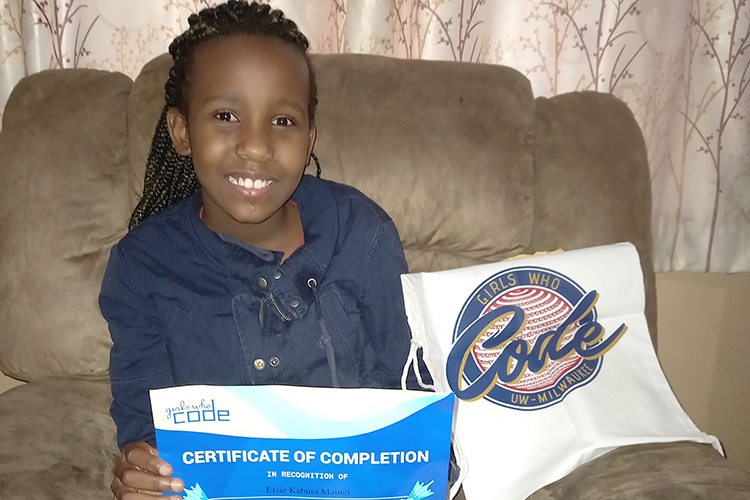 At her home in Nairobi, Kenya, Elsie Maingi shows off the certificate and tote bag she received from the Girls Who Code program at UWM. (Photo courtesy of Lilian Wangechi)

The pandemic and a year of virtual schooling had an unexpected benefit for a little girl in Kenya who connected with Girls Who Code at UWM.

“I use the computer for school, and I wanted to understand more about how they work,” said Elsie Maingi, who is 10 years old and lives in Nairobi.

However, computer classes in Kenya were geared to high school students and business people and were usually quite expensive, said her mother, Lilian Wangechi.

So in the fall of 2020, they turned to Google and found the free Girls Who Code program at UWM. Because of the time difference, Elsie got up at 2 a.m. for every class during that semester and the spring 2021 semester.

The national Girls Who Code program encourages young women of middle and high school age to get involved with computer sciences, according to Christine Cheng, an associate professor of computer science who launched UWM’s program in 2016.

“When we knew we were going to be online in the fall of 2020, it was a blessing in disguise because it allowed many people who were not living near UWM to attend classes,” she said, “but Elsie was the only one from a different country.”

Sammie Omranian, a graduate student and teaching assistant who manages UWM’s program, said she was amazed at Elsie’s persistence. “It was so surprising for me. I knew that she was from Kenya, but never thought about the time difference until her teacher, Anahita, told me.”

Anahita Qashqai, a graduate student who is one of the program’s teachers, also encouraged Elsie to overcome her shyness about using her English. Qashqai told her that English was also her second language since she grew up speaking Farsi. Another student piped up that her first language was Spanish. By the next class Elsie had turned on the camera, unmuted and was chatting away with her new friends and classmates from across the world.

“After that she felt more involved and engaged,” Omranian said. After falling a little behind for the first session because of the language concerns, Elsie quickly caught up. “Elsie was the only student who completed everything 100%,” Omranian said.

‘Awe for the amazing opportunity’

When the second class finished in spring of 2021, Omranian sent Elsie the certificate and tote bag that all the students received. It took a few months to get to Kenya, but Elsie and her mom were so excited to get it that they sent a photo and a thank-you note.

“Today Elsie received her certificate from GWC and I can tell that it’s one of her best days,” Wangechi wrote in an email to Omranian. “I look back at the year 2020 and am at awe for the amazing opportunity my daughter got at your program. She had always wanted to understand how computers work and her dream came true.”

The UWM program was the perfect answer to their needs, she added, with the only requirements being an internet connection and the ability to go to class early in the morning.

“The program has opened a new frontier for Elsie that is boundless and she knows that her wildest dreams can come true. This is an experience as a parent that I could never have replicated,” Wangechi wrote. “We say AHSANTE (THANK YOU) to everyone who made this possible – the tutors, program coordinators and the donors.”