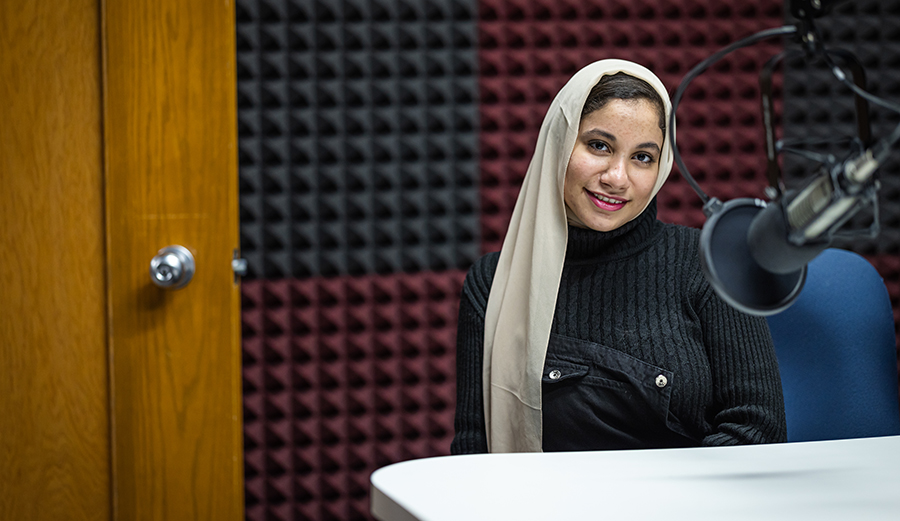 On paper, Menatallah “Menna” Elsamouly is just like any other college freshman.

She loves meeting new people. She enjoys playing guitar and creating videos. And she is searching for a part-time job. But Elsamouly’s background makes her anything but typical.

For starters, she is from Egypt, where social and cultural norms are very different. Her brother, Mohamed, was tragically killed in 2014, while fighting in the Egyptian revolution.

And her father, Uoussry, was wrongfully imprisoned by the Egyptian government shortly thereafter. He remains incarcerated to this day.

When considering her future, Elsamouly immediately thought of the United States. “I thought of the U.S. as the place of freedom,” she said. “There, I could say my opinion – politely – without anyone arresting me. It is a safe place.”

Ultimately, her search pointed to the University of Wisconsin-Superior. Elsamouly arrived safely on American soil September 8, and began classes on September 9. But her journey hasn’t been easy.

Elsamouly, who grew up in Cairo, is the first in her family to study abroad. She grew up speaking Arabic, and only started learning English last year, at age 16. Today, she is fluent in Arabic, English, and German.

Her father is a retired engineer. Her mother, Madiha, is a physician specializing in obstetrics and gynecology. And her sister, Marwa, is a medical sales rep.

Elsamouly discussed her long, winding road to the U.S. “I had my visa interview the day after high school graduation,” she said. “I found that it was easy. I was told by the consulate that I was approved.”

Her interview was July 24, and she later received a passport, but no visa. “I wondered if this was due to what happened to my dad and brother,” she noted.

Mark MacLean, UWS’ Director of International Admissions – who is in charge of recruiting and admitting undergraduate international students – stepped in to help. He reached out to the U.S. Embassy in Cairo, on Elsamouly’s behalf.

“She is such a bright student and a good communicator,” he noted. “After some delays, she received her visa on September 6, and arrived here just two days later.”

There is no doubt MacLean went above and beyond to help this bright, young student. He even picked her up from the airport!

“Mark helped me a lot,” Elsamouly shared. “He reached out and said they really wanted me as a student at UWS.”

“We have long had the second-highest percentage of international students in the UW System, behind only UW-Madison,” he added.

“But it’s also good for our domestic students to have the opportunity to interact with international students – through classes, sports, work, and living together. It’s a point of pride in the community.”

Elsamouly is pursuing an undergraduate degree in multimedia journalism. Someday she hopes to become a TV host or work in radio. “I really want to make a positive impact,” she said.

Thus far, her experience at UWS has been highly positive. She has already made several friends; some of whom are fellow international students.

“I am extremely amazed by the campus and the teamwork they have here,” Elsamouly said. “Everyone is nice and friendly. I feel very welcomed by everyone here.”