Fighting cancer with calculations: A mystery profession to most, medical dosimetrists target cancer from behind the scenes 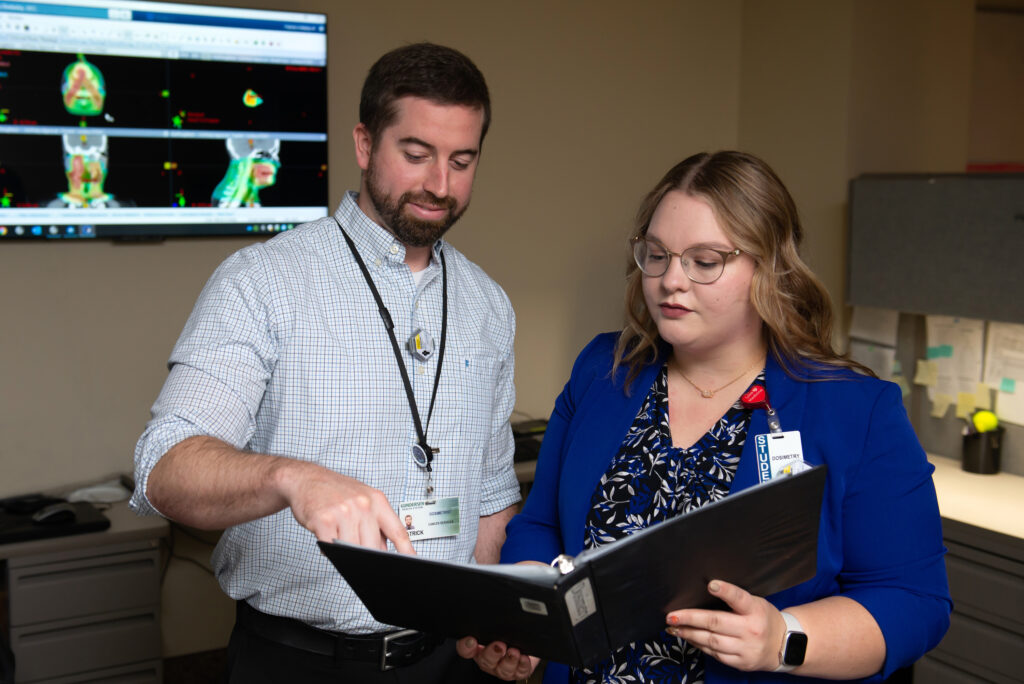 Medical Dosimetrist Patrick Melby graduated from UWL with a degree in Nuclear Medicine Technology in 2012, applied for the medical dosimetry program in 2014 and was in the program 2015-2016. He now mentors UWL graduate student Paige Solie. “It is fun to watch a student — to watch the light bulb go on when they understand the concept,” he says. Photo courtesy of Gundersen Health System.

Back in 2013, Patrick Melby was working at a plasma donation center when a patient sat down in his chair and opened a book with the words “Medical Dosimetry” across the cover.

Fluorescent pictures of cross sections of the human anatomy and radiation symbols got Melby’s attention. The conversation that followed changed his career direction.

What is a medical dosimetrist?

Medical dosimetrists use their knowledge of math, physics, anatomy, and radiobiology to plan optimal radiation treatment techniques and dosing to target the cancer while minimizing harm to any nearby organs or tissues. They join a team of radiation oncologists, medical physicists, radiation therapists, and other health professionals who make up cancer treatment teams. No plan they create goes unchecked by medical physicists and radiation oncologists.

Because no two patient cases are alike, the profession requires great attention to detail and tenacity to take on new challenges every day.

“I love it,” says Melby, who is now a medical dosimetrist at Gundersen Health System. “There is not a direct template that you use every time. You use critical thinking to make an optimal plan. Every day is like coming to a new puzzle and trying to figure it out.”

Medical dosimetrists find the profession in a variety of ways. Many start as radiation therapists and decide to continue their education in the field. Those that are not in the radiation therapy field tend to find it in more roundabout ways through friends, relatives or observations in the healthcare setting.

A pre-medical dosimetry undergraduate track at UW-La Crosse is helping to make the career path more direct for UWL students. And a partnership between UWL and Gundersen at the graduate level helps students gain a large amount of practical experience before they start their careers.

Medical dosimetry was and continues to be an in-demand profession. The American Association of Medical Dosimetrists predicts a shortage through 2035 based on advancing technology, baby boomer retirees and the lack of students graduating from the only 14 programs that exist nationwide.

A small team of people in Gundersen’s radiation oncology department helped do the background investigative work to help demonstrate the need for a medical dosimetry program at UWL back in the early 2000s. Dr. Nishele Lenards, a clinical associate professor of medical dosimetry at UWL, was hired at UWL in 2003 and continued collaboration with Gundersen. The first student was accepted at the Gundersen internship site in 2006-07.

“Our relationship with Gundersen has helped with improvements and growth of the program,” says Lenards.

The program has succeeded in helping to fill the need for medical dosimetrists. Accredited by the Joint Review Committee on Education in Radiologic Technology, the graduate program has always had a 100% job placement rate.

Gundersen’s medical physics and dosimetry team have provided support along the way, doing curricular reviews, allowing prospective candidates to observe in their department, sitting on the advisory board, teaching courses, and being mentors for current students.

Gundersen has provided internships to UWL graduate students in medical dosimetry for 15 years with many in the Radiation/Oncology Department supporting one intern per year to learn the profession. The intern starts with basics concepts and continues learning to handle more complex treatment planning techniques.

Melby was a graduate student in 2015-16 before joining Gundersen’s staff after graduation.

UWL graduate student Paige Solie is Gundersen’s current intern. She began the medical dosimetry program with the foundational online coursework in fall 2021, then January 2022 she started going to Gundersen six hours per day for her 12-month clinical internship while continuing her online coursework. Initially, Solie started with mock patients, and later began working on real patients where her plans are supervised and then checked by certified medical dosimetrists.

“The doctor gives you general guidelines for a plan and then a lot of freedom and independence to come up with the best possible treatment plan you can create,” she says.

Solie will graduate in December and will have acquired the skills to enter the profession.

“People [patients] are being treated across the hall from us and you can see how your hard work is being used,” says Solie. “It is fulfilling to know the plans we create are helping patients every day.”