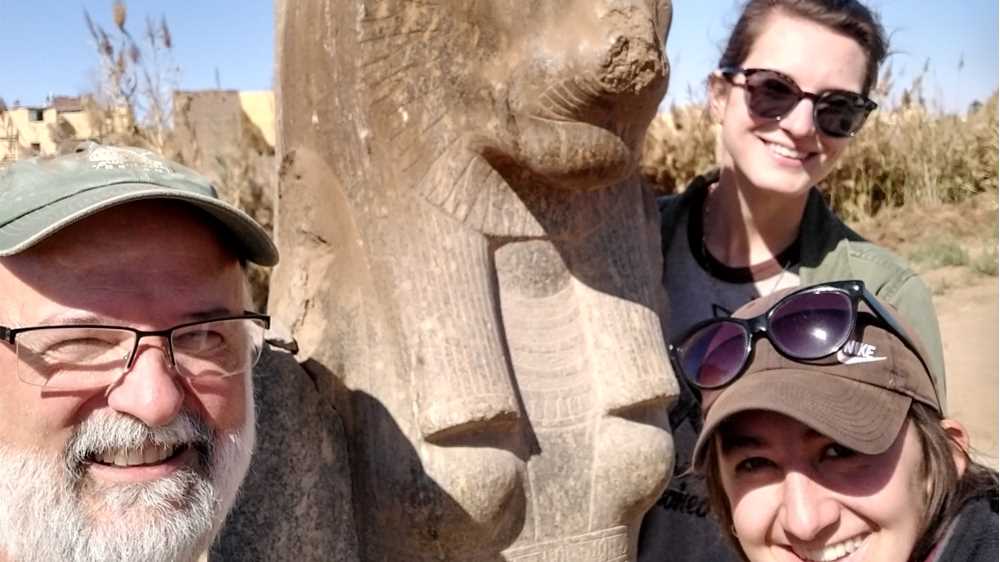 UWL Professor Dave Anderson and alums Nicolette Pegarsch (upper right) and Shannon Casey spent January 2022 scanning statues of the goddess Sekhmet at the Mut Temple in Luxor, Egypt. Pegarsch and Casey described it as the trip of a lifetime.

Imagine walking around an ancient Egyptian temple or holding a 4,000-year-old artifact in the palm of your hand.

UWL’s David Anderson is bringing people as close to that experience as possible through photogrammetry — the science of using photographs to produce 3D immersive models.

Anderson and two of his former students spent January 2022 working on a new project at the Mut Temple in Luxor, Egypt, photographing nearly 300 statues of the lioness-headed goddess Sekhmet. The photos will be stitched together into moveable, 3D models that can be viewed by anyone anywhere with a phone or computer.

“It’s estimated that there were over 500 of these statues in the temple originally, but some have been removed and taken to museums in Egypt and around the world,” explains Anderson, a professor in the Archaeology & Anthropology Department. Anderson was invited by Betsy Bryan, director of the Johns Hopkins University and University of Liverpool Expedition to the Mut Temple Precinct, to come with students from UWL and conduct a detailed 3D photographic documentation of the temple buildings and statues.

Anderson and his two understudies — Shannon Casey, ’21, and Nicolette Pegarsch, ’19 — spent several hours daily photographing the statues, taking hundreds of photos of each, from all different angles.

They took more than 55,000 photos during their 12 days of work at the temple.

Anderson — a leading Egyptologist and the president of the American Research Center in Egypt — admits he’s grown a little jaded having visited the area so many times. He’s scanned so many sites and artifacts over the years that his trips to Egypt can begin to feel almost business-like.

But seeing the sights with two newcomers, he says, was fresh and rewarding.

“Because of their enthusiasm, it was like seeing Egypt for the first time,” Anderson explains. “Seeing how excited they’d get, the questions they’d ask, it was really like seeing Egypt through a fresh pair of eyes.

“It was also so rewarding to see the students actively applying what they learned in my classes in the real world,” he said. “Not just with scanning the statues, but seeing them trying to translate hieroglyphic inscriptions in the museums, temples and tombs we visited.”

As a young person passionate about archeology, Casey says it was the trip of a lifetime.

“It was really amazing, after taking a variety of different classes about archeology and Egypt, to see things I had learned about in class and to put my knowledge to the test,” she notes. “I never thought I’d get to go to Egypt, and certainly not in the capacity to access some of the most amazing wonders of the world. This trip made me a more experienced traveler and archeologist.”

“The experience I had in Egypt was absolutely incredible — something that I had dreamt about for 15 years,” she says. “Egypt is a very sensory country. Between the delicious foods, constant trills of car horns and the absolute beauty of the landscape in Luxor, I just fell in love.”

“My experience in Egypt and at the Winona County Historical Society is something a lot of universities and museums are looking to do,” Pegarsch says. “Preserve our past.”