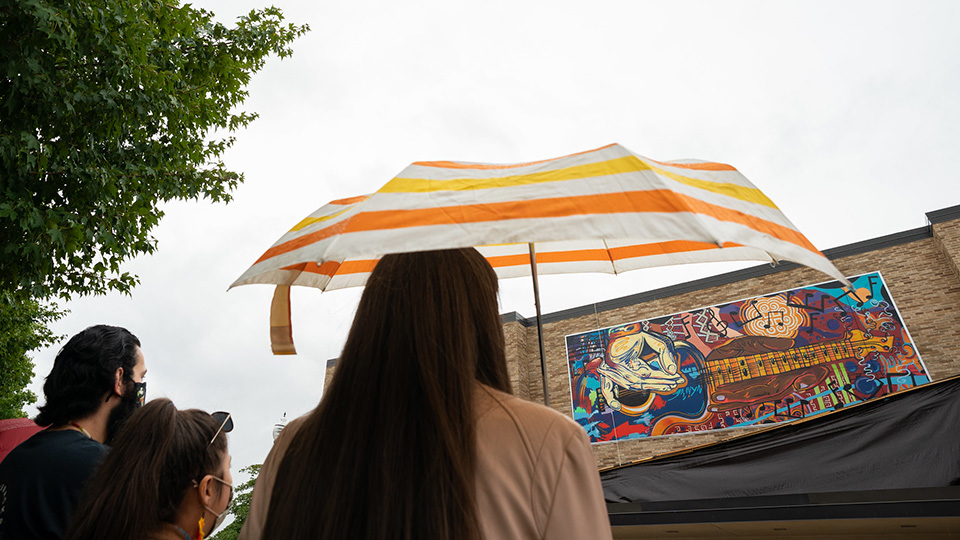 A large colorful mural—with a unifying theme celebrating differences―is on view for all to see this fall on the University of Wisconsin Oshkosh campus.

Three years in the making, the UW Oshkosh Multicultural Student Task Force this week unveiled the new artwork, made up of a dozen 4-by-8-foot sheets in all, affixed to the side of Albee Hall facing Polk Library.

“This project took so long to do and it’s finally here,” said Pa Houa Xiong, a task force member who graduated with a degree in biology in spring 2020. “I’m so excited and hope that other students are excited as well.”

Xiong said the mural is important to her because it is intended to uplift and recognize the communities on campus as well as symbolize the differences amongst each other and “create unity.”

Nicholas Metoxen, task force member and former president of the UWO Intertribal Student Organization, graduated in December 2019 and works as a teacher for Oneida High School. He said he’s extremely happy other students stepped up after original task force members graduated to see the project through.

“I’m super excited to see what kind of impact it has on campus,” he said.

Metoxen believes as students walk to class, the mural will be a reminder of varying cultures. And prospective multi-cultural students who are thinking about attending UWO will see a mural both put up by students and for students. 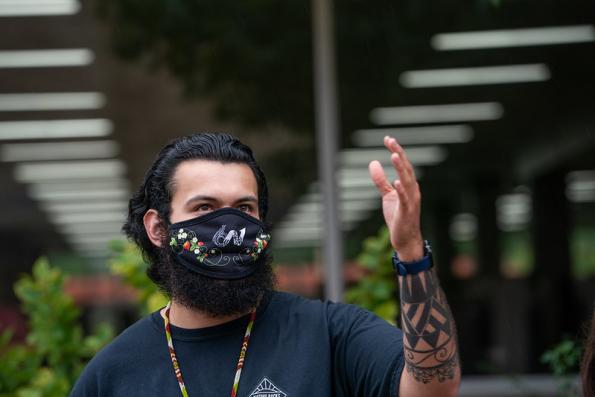 “I’m hoping the mural includes a little cultural flavor from all around the world and sings its own song to each viewer,” he said. “With music, every culture has its own music, but every culture is singing the same song. I titled the mural, Same Song.”

Chancellor Andrew Leavitt said the mural represents that all are supported and valued—”that is what we are trying to achieve.”

UW System Regent Corey Saffold, on hand for the unveiling, said the UWO students didn’t take “no” for an answer regarding the mural.

“Build this mural in every aspect of your life: for justice, for equity, diversity and for inclusion,” he said.

Mai Khou Xiong, acting director of Student Achievement Services in the division of Academic Support of Inclusive Excellence, is adviser of the Multicultural Student Task Force and the student-led initiative to get a mural placed in a prominent part of campus. 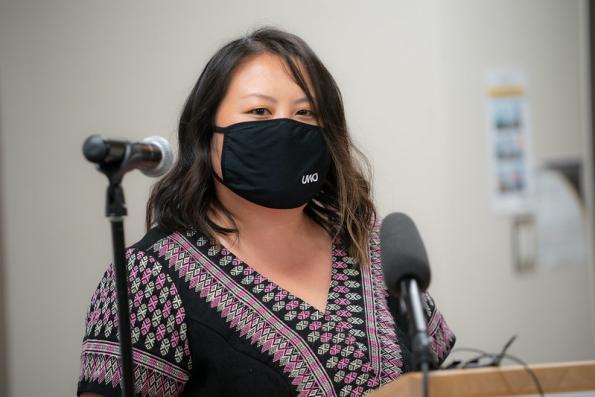 She said several years ago leaders from various multicultural student organizations came together to talk about diversity, inclusion and their experiences on campus. From these dialogues, students identified that there needed to be greater representation of cultural diversity both in and outside of the classroom. One of the critical areas of need was having multicultural artwork on campus. As a result, the student task force was formed with a goal of installing a mural on campus. Students led all aspects of the project, from securing funding, finding a location and selecting the artwork.

Dedicated and hard-working students “had a vision three years ago and brought that vision to life,” Xiong said, calling the artwork “an important piece and a meaningful piece.”

The unique artwork is the creative work of Anhorn, owner of Anhorn Entertainment in western Wisconsin. Anhorn is successful as a caricature artist and creates murals and ice sculptures. This latest work is among the larger ones he’s done over the years.

In July 2001, he and a fellow artist were hired to paint the side of an entire building in Brooklyn two months before 9/11. The 150-by-10-foot mural of a space scene was untouched for four years before it was vandalized.

Another mammoth piece was a 2,500-foot children’s play area mural in July 2013 he was commissioned to paint at the Oakwood Mall in Eau Claire.

For the UWO mural, Anhorn painted the 12 plywood panels with a double coat of primer and then a latex coat of red to the mural side. He then drew his design with latex paint and completed the entire mural freehand with spray paint. He finalized the panels with a clear coat before delivering them to the University. He estimates each panel weighs 75 pounds, noting they were “heavy to move during the entire process but an incredibly fun way to exercise.”

What will students think when they pass by Albee Hall?

“I’m guessing students will like having something colorful and whimsical to look at as they pass along that part of campus,” he said. “I left the design open for interpretation and I hope the mural sparks the students’ imagination.”