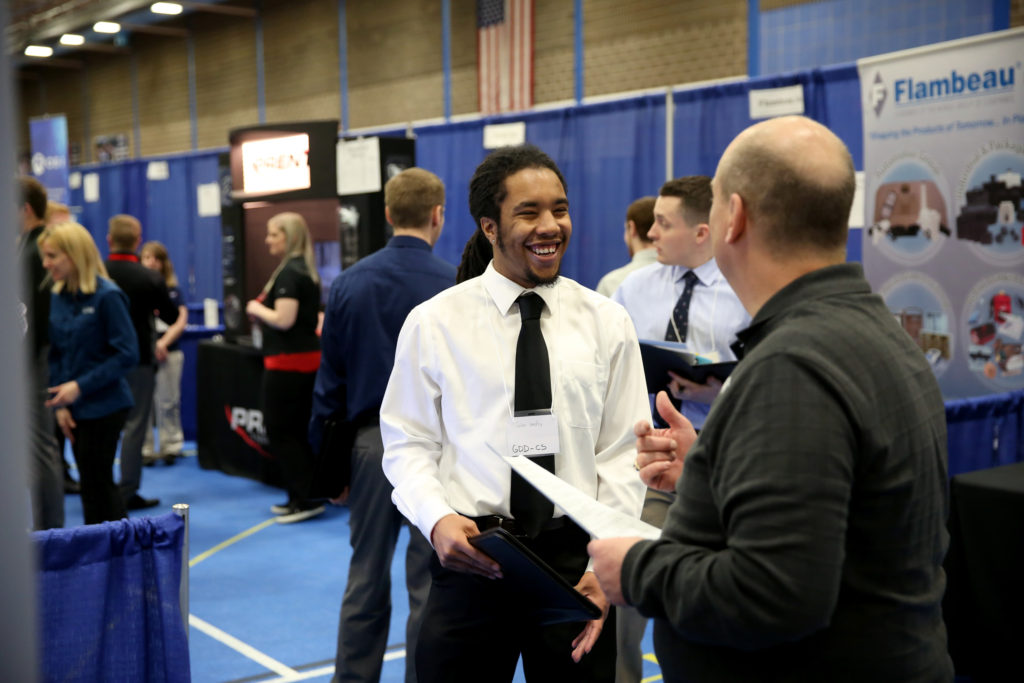 Jalen Hendley, a computer science-game design major from Flossmoor, Ill., visits with a recruiter at a 2017 Career Conference. / UW-Stout photo by Brett Roseman

New graduates of University of Wisconsin-Stout enjoyed even greater success in the job market than last year, according to a new employment report announced Thursday, Feb. 8, by Chancellor Bob Meyer.

The 2016-17 Annual Employment Report prepared by the Career Services office showed 98.2 percent of the 1,593 graduates were employed or were furthering their education within six months of leaving campus. That compared to the 2015-16 rate of 97.4 percent and is the fourth year in a row the rate has increased. 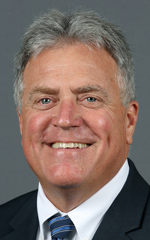 “Employers know that when they hire a UW-Stout graduate, they are getting an employee who is ready to make an immediate contribution to the success of their business, industry or organization,” Meyer said. “Our employer partners are very aware that our students have had an education that stresses applied learning and gaining valuable experiences in the workplace.”

“The main thing (in my decision) was the focus on hands-on degrees that train you for the career you want,” said Vass, a native of Wyoming, Minn. Vass took a job with Cisco Meraki in San Francisco after graduation — the company where he interned during his time at UW-Stout.

“The internships were definitely the most incredible thing for me,” Vass said. “No matter how hands-on your education is, nothing beats work experience.”

Another major increase cited in the report was that 87 percent of the 2016-17 graduates were employed in their major, up from 85 percent the previous year. The median starting salary of the new graduates was $43,000 a year, up from $42,500 the year before. 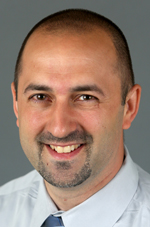 Bryan Barts, director of Career Services, said the increase in the employment rate “is a reflection of employers, nationally, regionally and across the state, who are increasingly recognizing the value of our comprehensive polytechnic focus and are looking to collaborate with UW-Stout to support their hiring and company growth.”

Barts said UW-Stout aligns its academic programs to employer needs, meaning that “our programs and faculty and staff play a big role in preparing our graduates to possess the knowledge and skills sought out by employers.”

Another key to the success of UW-Stout graduates in the job market, Barts said, is the Cooperative Education Program, which in 2016-17 placed 1,084 students in paid positions. The program “helps students to apply their learning in the work world and provides a hiring pipeline” for the business, industry or organization, Barts added.

Meyer said it is important to note that the current employment report has an 81 percent “knowledge rate,” “which means that the results are very, very reliable.”

DaMarcus Zeroth is a River Falls native who majored in criminal justice and rehabilitation, graduating in December. He landed a full-time job with the Menomonie Police Department prior to graduating. He said he chose UW-Stout because of “the hands-on learning approach.”

Grace Sutula, a native of Loveland, Colo., is working for Fast Enterprises in Olympia, Wash., after graduating with a degree in applied mathematics and computer science. She credited the professors at UW-Stout with putting in “enormous amounts of time and effort into making sure that I had the best chance possible to succeed. They affected my life in more ways than one, and I am eternally grateful to them for encouragement of me and their commitment to their students.” 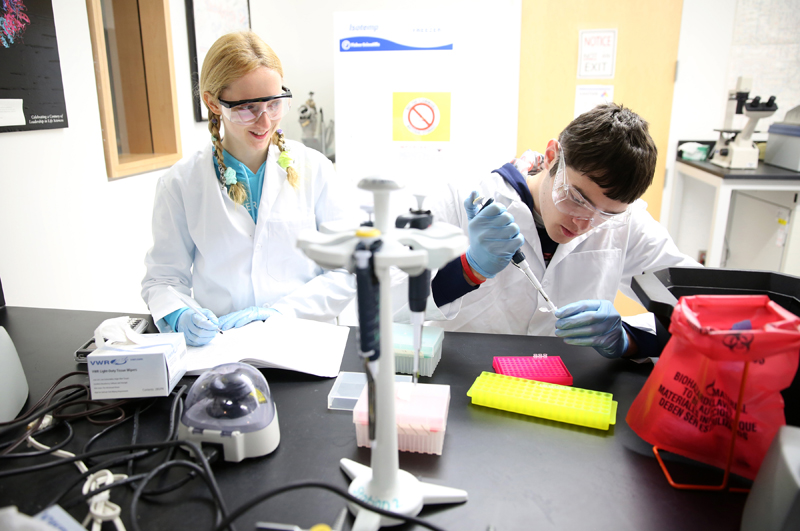 Students work in a molecular cell biology lab at UW-Stout.