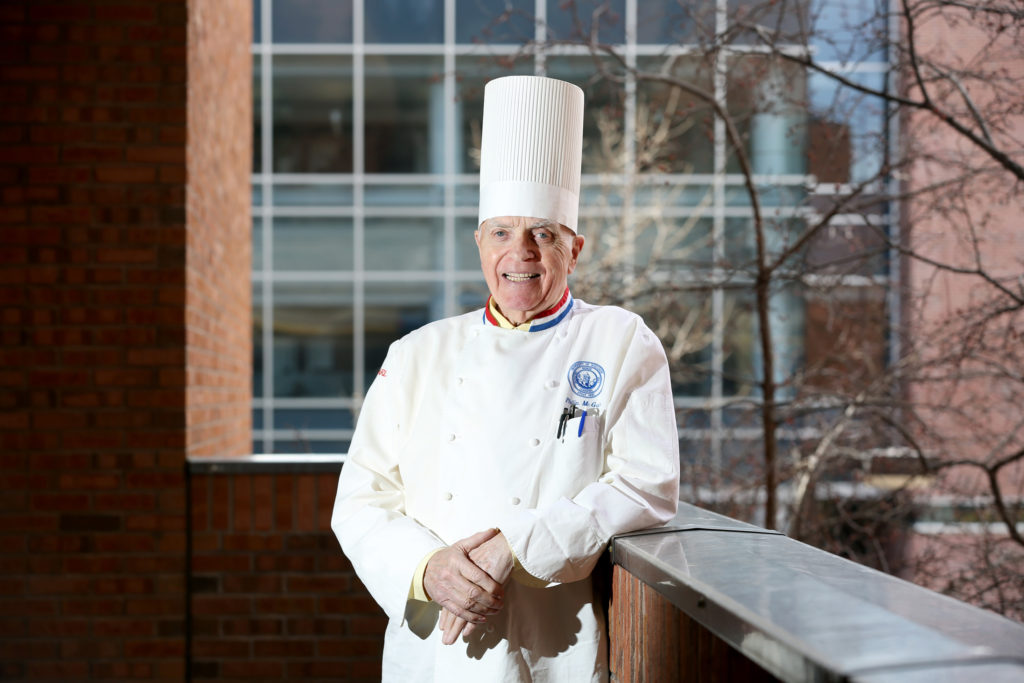 Phil McGuirk, a professor in UW-Stout’s School of Hospitality Leadership.

Menomonie, Wis. — Professor Phil McGuirk was in his element in February when the Club Managers Association of America kicked off its annual conference in Orlando.

He was surrounded by 30 of his University of Wisconsin-Stout School of Hospitality Leadership students, who had held fundraisers and paid their way to attend. Also in attendance were many of his former students, now managers at clubs around the U.S.

When one of the latter, UW-Stout alumnus Randy Ruder, general manager of the Beach Point Club in Mamaroneck, N.Y., began to speak about a longtime professor and CMAA supporter, McGuirk guessed something special was afoot.

It was. Ruder presented the surprised McGuirk with a plaque commemorating his 40 years of being “dedicated to fostering the development of the club management industry’s next generation.”

McGuirk, 78, of Menomonie, who also has been teaching full-time at UW-Stout for nearly 40 years, said he feels honored to have been part of the lives of so many students and that it’s the reason he’s still teaching.

“I thought about all of the work, effort and time and the ups and downs of working with the students. It’s special to be part of their success. It’s very rewarding. It’s better than the paycheck,” he said.

“I could have retired 15 years ago, but I really enjoy pushing the students. I give them a dose of reality. When students come back to campus, there’s always a big thank you. You’re part of a kid’s life when you’re teaching. I’d really miss the kids if I wasn’t teaching. I’d probably die within a year,” he said.

McGuirk helped start UW-Stout’s student chapter of CMAA when he was a student in the mid-1970s. In fact, UW-Stout and Florida International University were the first student chapters in CMAA, which today has about 50 student chapters with 1,600 students. Overall, CMAA has 6,500 members representing 3,000 clubs, such as country clubs, athletic clubs and yacht clubs.

UW-Stout chapter president Tim Komaromy, of Algonquin, Ill., helped get the ball rolling on McGuirk’s award, and CMAA national officials quickly were on board. Ruder is on the CMAA Board of Directors.

“What makes Phil special is that he has the best interest for every student at heart,” Komaromy said. “He has a relationship or connection with absolutely every hospitality company you can think of. If you walk into his office and say, ‘I want to work at the Four Seasons Maui or at a restaurant in northern Minnesota,’ he will whip out a business card and say, ‘Here is who to talk to.’”

Kathy Collins, a 1994 UW-Stout graduate and managing director of the Wisconsin Badger chapter of CMAA, and Kayleigh Apel, a 2012 graduate and food and beverage manager at Somerby Golf Club west of Rochester, Minn., wholeheartedly agree. 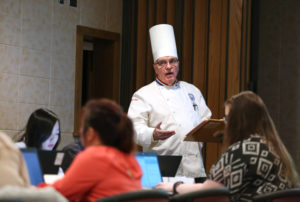 “Phil is consistently looking out for the best interests of his students and working tirelessly to offer relevant experiences and opportunities for continued education for each and every one of them. He is generous with his time, talent and resources. Phil is as dedicated today to his students as he was back then,” Collins said.

Apel said McGuirk “is always looking out for the students and truly cares about their future. I know that I can reach out to Phil for anything, and he will do everything in his power to help. He has always been extremely genuine, and I respect that because there are so many people who want to sugarcoat things instead of being upfront and honest.

“I appreciate a professor who tells me I can achieve any dream I may have, but I truly respect the professor that will share their past experiences and prepare me for the real world. Phil possesses both those qualities. He wants you to reach for the stars, but he will also tell you about the work and dedication needed to be successful. Stout and CMAA are so lucky to have him be involved with their programs, and I could not imagine my career without his support and guidance,” Apel said.

From the Vietnam War to hospitality

McGuirk currently teaches classes in Club Management and Principles of Food Service Operations as well as overseeing the 150-plus students who have co-ops at clubs each year.

A graduate of UW-Stout’s hotel, restaurant and tourism management major in 1976 and vocational rehabilitation master’s program in 1981, as well as the Culinary Institute of America, he taught Quantity Food Production at UW-Stout for 30 years. He taught hundreds of students how to work in a team atmosphere in a commercial kitchen.

“I was fairly tough on students, very demanding, but I’ve mellowed over the years,” said McGuirk, who remains an avid runner despite two hip replacements.

Apel saw that toughness. “When I first met Phil, I was extremely intimidated. He seemed stricter and more gruff than other professors at Stout, and that scared me. But the more I got involved with CMAA and worked with him on a consistent basis, the more he became my greatest supporter. He made my time at Stout amazing,” Apel said.

McGuirk’s toughness can be traced in part to serving in the Army from 1963 to 1974, including five tours in Vietnam and Laos with the Army’s Special Forces. “I lost a lot of buddies over there,” he said.

He also can trace his interest in hospitality and club management to his military days. He wrapped up his military service by being offered a chance to manage an officers club on Okinawa in Japan. He liked it and decided to pursue a degree in hospitality, landing at UW-Stout and never leaving.

He’s a long way from his family home, a farm in Northern Ireland. He emigrated to the U.S. in the 1950s at age 16 to live with an aunt in the San Francisco area.

“I love the beauty of this campus and working with the students and alumni, who are very, very loyal to UW-Stout because they’ve had a good experience,” McGuirk said. 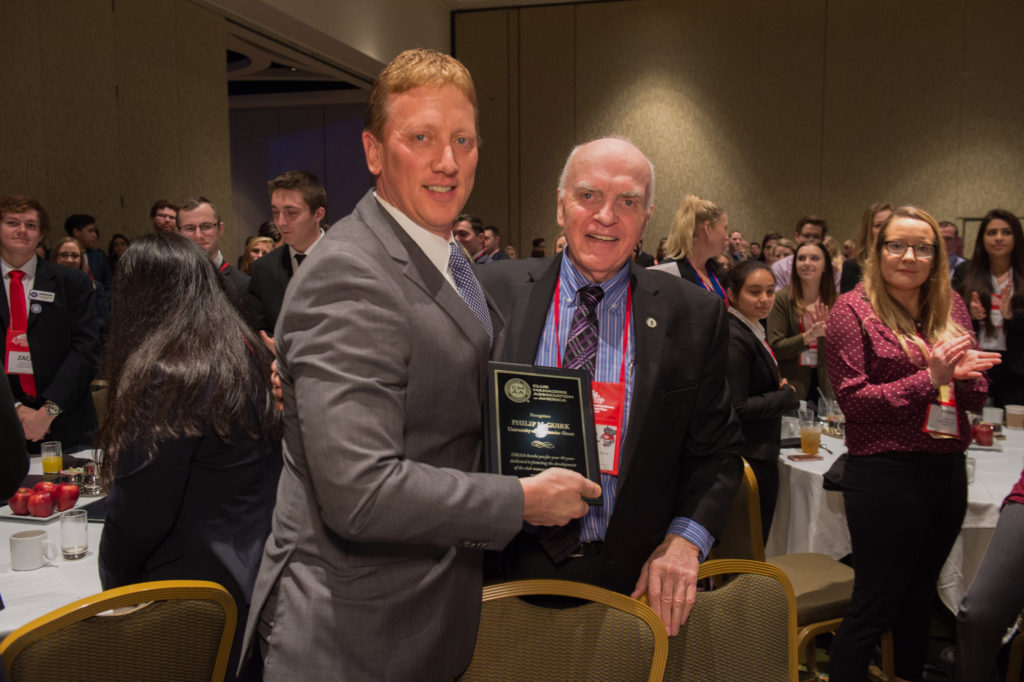 UW-Stout Professor Phil McGuirk, right, receives a plaque in February in Orlando for 40 years of service to the Club Managers Association of America (CMAA). Presenting the award is Randy Ruder, a UW-Stout alumnus and a member of the CMAA Board of Directors.