Menomonie, Wis. — For most of the 1,382 students graduating from University of Wisconsin-Stout, commencement ceremonies Friday and Saturday were a goodbye.

Commencement is a formal farewell to the campus where they’ve spent years rushing to classes, hanging out with friends and living in the residence halls.

They may return someday but probably not to eat pizza with friends at midnight or to pull an all-nighter studying for a final exam.

Commencement day has a much different feel, however, for some graduates. For online students it’s more of a hello than a goodbye. It often is their first chance to set foot on campus.

The latter scenario was the case for a group of graduates from the Master of Science in education program. Students from at least five states outside of Wisconsin came to campus for the Friday, May 10, Graduate School ceremony at Johnson Fieldhouse.

Angela Wilson came from New Orleans with her parents. Fiorella Velarde came from Miami with her daughter, Oriana, 6. Lisa Klein came from New Jersey with her husband, three young children and mother.

There to meet them were other cyber classmates: Melissa Magnuson-Cannady from New York with her husband, Will; Stacy Harvey from Minnesota; and Mara Werner from 100 miles away in Hayward.

The outlier of the group was Linda Young, who works at UW-Stout as the transfer coordinator but also was graduating with her master’s.

Assistant Professor Renee Chandler, the program director, was there to greet all of them, having helped orchestrate the meet-and-greet.

Graduates and Chandler exchanged handshakes and hugs in the Memorial Student Center about an hour before commencement, happy to finally meet some of the people they had gotten to know online.

The M.S. in education program had a total of 21 graduates from eight states, including Georgia and Nebraska.

“I loved my entire experience at Stout online,” Klein said. “I made some great friends who I know will be lifelong friends. It was easier than I imagined to attend graduate school online.”

Klein and her husband, from Flanders, N.J., decided to turn the occasion into a family vacation. “We surprised the kids, since we didn’t think we would be able to bring them. I honestly don’t know who’s more excited, them or me!” said Klein, who added that they spent the day before commencement at the Mall of America after flying into Minneapolis.

With her master’s, Klein plans to return to the classroom after 14 years away from teaching.

Wilson is a baking and pastry instructor at the Louisiana Culinary Institute. Werner is a kindergarten teacher in Hayward. Harvey is a fourth-grade teacher in Osseo, Minn. Magnuson-Cannady works for the National Park Service at Ellis Island in New York City.

Velarde completed a certificate in instructional design, as well, and planned to stay in Menomonie for several days to meet with Career Services at UW-Stout. “I wanted to see the city and the school. Stout has a great reputation,” she said. 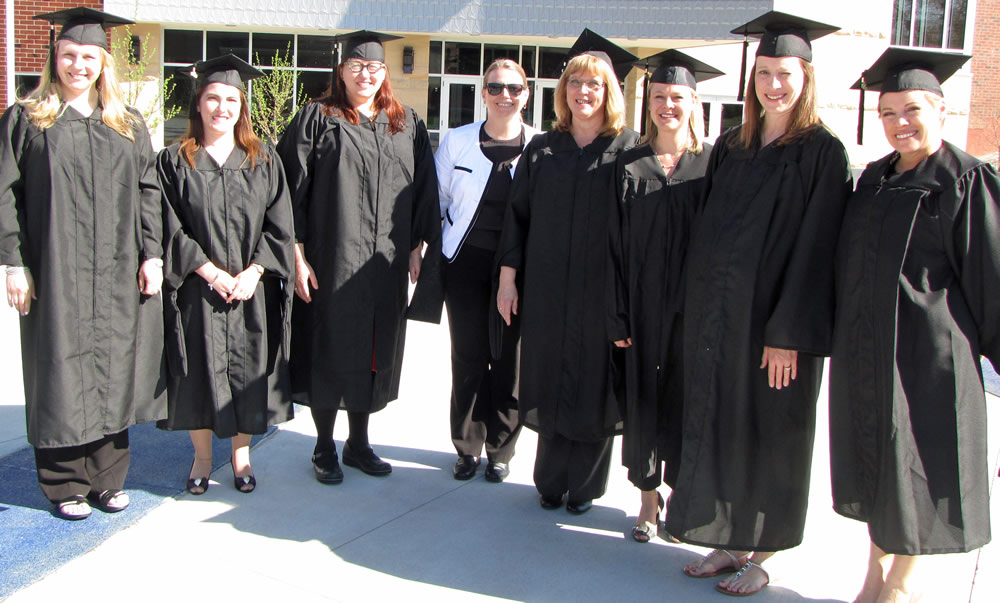