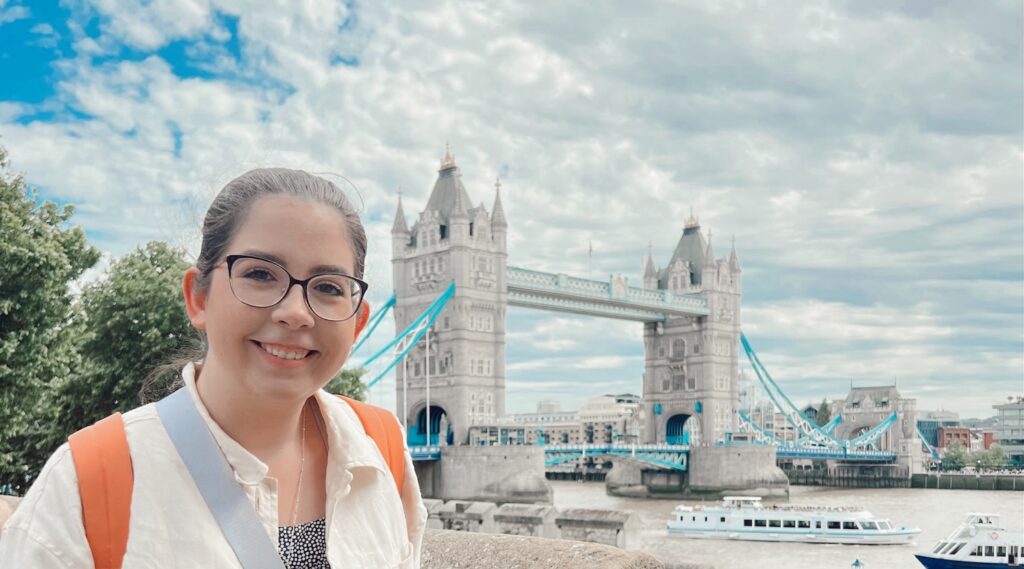 Ellie Fernandez’s internship at a film and theater studio in London gave her new skills and connections as well as the opportunity to explore a city that’s always interested her. After she graduates, she is considering pursuing a career in marketing, development or production within the film industry. Fernandez is among the first Blugolds to complete internships through UW-Eau Claire’s new international internship program, which offers eight-week summer internships in several parts of the world. (Photo courtesy of Ellie Fernandez)

When Ellie Fernandez came to the University of Wisconsin-Eau Claire, she knew she’d have plenty of interesting experiences on campus and around the world thanks to the university’s stellar business and international programs.

However, Fernandez — an international business major and French minor who aspires to someday work in the film industry — never expected her college experiences to include watching the cast and crew of the wildly popular “Ted Lasso” show film an episode in London.

Thanks to UW-Eau Claire’s new international internship program, Fernandez was in London last summer when she hopped on a train during her lunch break to catch the filming.

“It was incredible,” says Fernandez, a senior from Waukesha who will graduate in May 2023. “I was even able to get a photo with Jason Sudeikis. Seeing the main filming locations from the show and the cast and crew at work, doing what they love, was special.”

She was “in awe” watching the show’s female director work, Fernandez says, adding that “seeing her behind the camera really inspired me.”

Fernandez was among the first Blugolds to participate in UW-Eau Claire’s new international internship summer program, which is designed to meet the needs of current and future students, says Colleen Marchwick, director of UW-Eau Claire’s Center for International Education.

“We added an international internship program in response to generational change,” Marchwick says. “We are very excited and hope to see the program grow.” 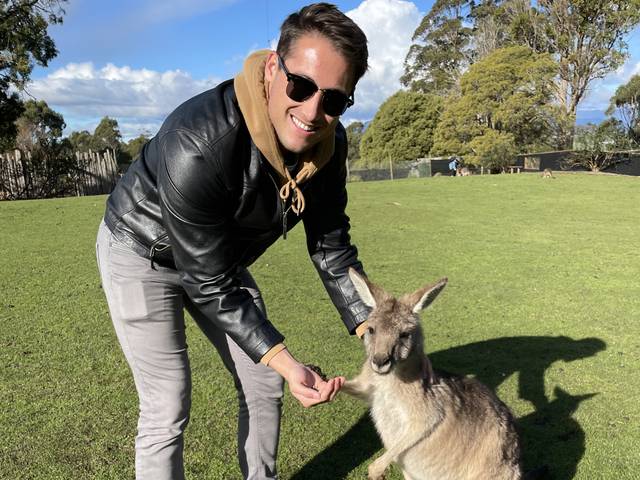 Although many UW-Eau Claire study abroad programs allow students to complete internships and volunteering along with academic coursework, the international internship program is the university’s first program that is solely focused on the internship experience, Marchwick says.

“Gen Z is known for prioritizing career and career progression as well as seeking experiential and project-based learning,” Marchwick says. “We added a program that blends these generational preferences. With an international internship, students can explore career interests or build on their UWEC training by applying what they have learned to a specific project.”

The first UW-Eau Claire students in the program completed internships in England, Australia and Ireland during the summer.

The eight-week internship placements occur during the summer in various locations, including in English-speaking regions like the United Kingdom and Australia, and in Spanish-language countries including Argentina, Chile and Spain.

In addition to their internship work, students in the program complete a class, where they reflect on their experiences, the skills they are building and how they can apply their learning to their future careers, Marchwick says.

Martin Kocher, a senior who will graduate in May 2023 with an international business major and language certificates in German and Chinese, says the new international internship program aligns with his personal and professional interests.

“Since my career goal is to work internationally and facilitate the connection of capital for sustainable development, I decided working internationally would be the best option,” says Kocher, a native of St. Paul, Minnesota.

Kocher’s summer internship took him to Brisbane, Australia, where he was the assistant marketing manager for Cement Australia, the country’s largest domestic supplier of cement.

As an intern, he filled gaps in qualified labor in Australia’s record labor shortage, marketed the company’s achievements in sustainability and increased the engagement of customers on its social media, Kocher says. He also “bridged cultural differences and worked tirelessly to enhance Cement Australia’s brand image,” he says.

“The best part of my internship was how rewarding it was to see the fruits of my labor,” Kocher says. “For example, I created a strategic social media engagement plan that increased engagement exponentially. I also offered to create a marketing plan for a subsidiary company in Melbourne, so I flew to Melbourne for a week. Having the company send me to Melbourne to work on a project I had thought of was an unforgettable experience.”

Fernandez, who hopes someday to work in marketing, development or production within the film industry, was a summer intern at Riverside Studios, a film and theater studio in London. It was an experience that “really pushed me out of my comfort zone,” she says.

As an intern at RS, Fernandez switched departments every two weeks, allowing her to work alongside many members of the studio’s staff, including the head of the theater department, the management and marketing analytics team, and staff in the film and cinema department.

Her work included doing everything from researching new partnerships and collaborations in the arts to supporting community events to processing community membership applications to helping write grants and serving as the first point of contact for new community members.

At the end of the internship, Fernandez presented a report outlining what RS’s competitors do differently/better and shared her ideas for how to make the company stronger.

Fernandez says the internship gave her an opportunity to “really delve into the business world in London by discussing work with my co-workers and how they view U.S. culture and vice versa.”

She “thoroughly enjoyed” her work, Fernandez says, adding that while in London she made professional connections and lifelong friends. She also learned about London’s history and culture.

“I’ve always wanted to see what life was like in London,” Fernandez says. “Having a busy workload while also exploring London was rather thrilling. There’s so much history in Great Britain, so I just fully immersed myself as best I could to get the most authentic experience.”

“I remember rushing on the Underground right after work, hurrying to eat something quick and being so out of breath when I’d reach my seat before the lights came up for the show,” Fernandez says, noting that during the summer she also met famous actors including Amy Adams and Bill Pullman.

Kocher encourages students who hope someday to work in other parts of the world to have an international internship because it’s a “highly valuable experience” that will make them stand out when applying for jobs.

“Nowadays, being a dynamic thinker and willing to immerse yourself in a new culture is what employers desire, and it would certainly set you apart,” Kocher says.

Fernandez agrees, saying that while the internship was the “hardest thing I’ve done,” students who complete an international internship will “come out the other side of it a more culturally aware, stronger and more resilient version of themselves.”

“You learn more about yourself and what you’re capable of when you are put in situations where you must figure out directions, the subway, bus routes, budgeting, managing time or keeping yourself safe,” Fernandez says. “No matter what your major is, there is no richer experience than exploring the world on your own, finding out who you are and what’s important to you, while also working in a completely different work environment.”

Looking to the future

Kocher’s mother’s family is from Germany, so he often traveled to Europe for visits. As he grew up, he discovered a “passion for cross-cultural collaboration and international projects that benefit humanity,” an interest that inspired him to study international business in college.

“To make the world a better place for humanity, it’s essential to know how to facilitate business cross-culturally and connect capital (human potential),” Kocher says of his goals.

After he graduates, Kocher plans to work in the field of business development consulting, with a focus on helping companies and organizations form strategic partnerships. His internship in Australia reinforced his hope that his work takes him to many places around the world, he says.

“Working internationally has already confirmed my desire to work in another country after graduation,” Kocher says. “The internship proved to me that the life I dream of is possible and that I’m taking the necessary steps to get there.”

While Fernandez wants to work in the film industry, she is open to working in other industries as well. Since she has many passions, she wants to keep her options open as she considers her future.

“I am even considering applying to film school to become a movie director,” Fernandez says. “My internship really opened my perspective to how working in film and theater could become my daily life and that really fascinates me.”