Dr. Kurt Wiegel has been teaching chemistry at the University of Wisconsin-Eau Claire for more than 20 years, so it takes a lot for a student to surprise him.

Still, when senior Broc Kelley texted saying that he’d received a full scholarship to attend the University of Wisconsin School of Medicine and Public Health, Wiegel says he literally dropped his phone.

“I’ve never heard of it in my life,” Wiegel says of a Blugold receiving a scholarship to cover the estimated $200,000 tuition for medical school. “I’ve heard some people getting some scholarships, but I’ve never had a student who got a full ride. And I can’t think of anyone who deserves it more.”

Kelley, who will graduate this spring with a biology major and minors in chemistry and pre-professional health science, says he was stunned when he got the call from the director of UW-Madison’s Native American Center for Health Professions giving him the good news.

“Honestly, after they said I was accepted into medical school and with a full scholarship I started crying and don’t really remember anything else,” Kelley says of the call, which came as he was volunteering at an Eau Claire hospital. “I had to reach out to them later to get the details.”

Saying he “shot for the stars” by applying to medical school, he’s “very blessed and very lucky” to be fulfilling his longtime dream of becoming a physician, Kelley says.

“People talk about liking to see good things happen to good people, and that’s exactly what this is,” says Wiegel, who describes Kelley as “amazing, kind, gentle, calm, brilliant and dedicated. He’s a wonderful guy who deserves this absolutely.”

Kelley credits Wiegel, a professor of chemistry and biochemistry, and his other UW-Eau Claire faculty and staff mentors for guiding and supporting him as he’s followed a nontraditional path that will take him to medical school in the fall.

“It’s been a wild ride, and I couldn’t have done it without my mentors,” Kelley says. “They inspire me every day to be my best version of myself.” 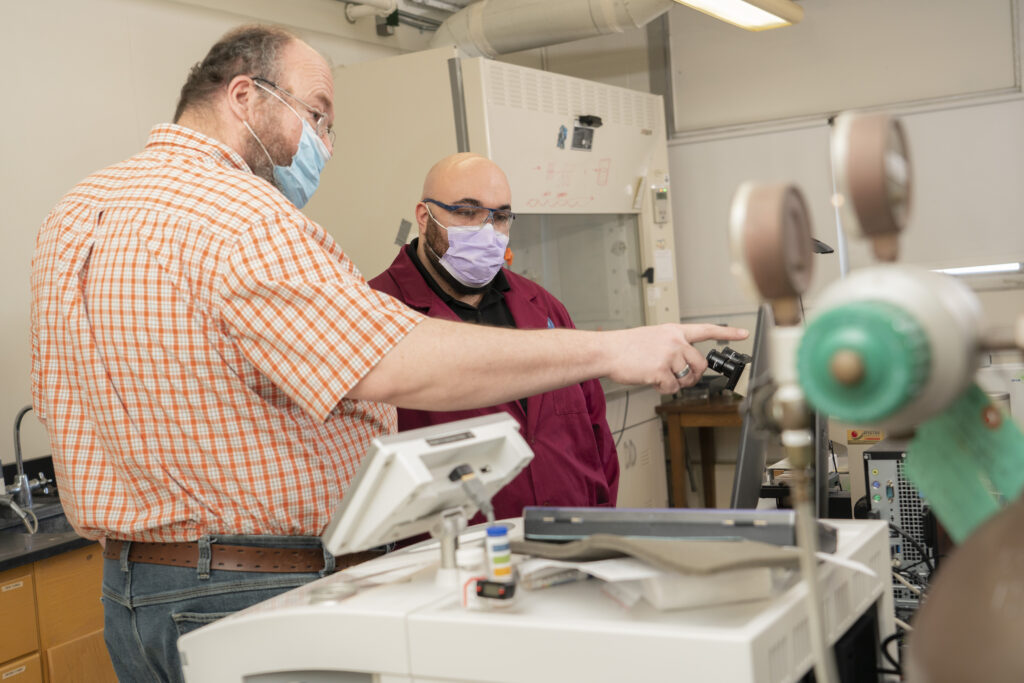 Dr. Kurt Wiegel (left) and Broc Kelley have worked together on synthetic organic chemistry research for more than a year. Kelley has earned a full scholarship to the UW School of Medicine and Public Health in Madison. (Photo by Shane Opatz)

Kelley’s “wild ride” to medical school includes having been homeless for a time 10 years ago.

After high school, he hoped to go to UW-Eau Claire and then on to medical school. When he didn’t get into UW-Eau Claire, Kelley enrolled at another college to study accounting. After finishing some general education classes, he realized that neither the college nor the major were a good fit, so he dropped out.

With no job, school or real direction, he lost his way.

Homeless and hungry, Kelley was waiting in line at an Eau Claire food bank — carrying all his belongings in the backpack that he’d once used to carry his textbooks — when he promised himself that one day he’d be on the other side of the table, serving meals to people in need rather than receiving them.

Ever since, Kelley, who now is a semi-regular volunteer at The Community Table, has been working to fulfill that and other promises he made to himself during what he calls a “low point” in his life — promises that include dedicating his life to serving others.

“I had to get real, look in the mirror and grow up a bit,” Kelley says of his struggles a decade ago. “I had to ask myself some hard questions about my life and future.”

Kelley says he was fortunate that as he searched for answers, plenty of people in the Eau Claire community stepped up to help. When someone suggested he complete a certified nursing assistant program, he followed their advice. He worked as a CNA for seven years, enjoying the job but never quite letting go of his dream of going to medical school.

So, when he saw co-workers successfully balancing school and work, he decided to give college another try. He again applied to UW-Eau Claire; this time he was accepted.

“I’ve always had an interest in medicine; I always knew that’s where I wanted to go,” Kelley says. “For me, the answer to the ‘why medicine’ question goes back to my childhood. I was raised by my grandmother, who instilled in me a desire to have a care mentality. She had this aura of sincerity and kindness and thoughtfulness about her. I’m really trying to live my life the same way.”

Finding his place on campus

As a Native American, nontraditional transfer student who had been away from school for a decade, Kelley says he was “feeling a little lost” when he first came to UW-Eau Claire. He knew he needed to build a support network on campus if he was going to be successful.

He didn’t have to look far to find faculty and staff who were eager to help. Faculty in the chemistry and biochemistry department and in the university’s Health Careers Center became trusted mentors, and staff in the Office of Multicultural Affairs provided friendship and support.

“Without all of them, I probably wouldn’t have made it this far,” Kelley says. “They have all been central to my success. College can be a rough time for anyone, but especially during COVID. The mentoring and friendships I’ve found on campus is one of the best parts of being here.”

Kelley says he appreciates that UW-Eau Claire is a “welcoming campus” that is working hard to meet the needs of all students, including those from underrepresented populations.

“They are striving and succeeding,” Kelley says of UW-Eau Claire as well as his next home, UW-Madison. “It’s in their mission statements, which is a good thing, but they aren’t just talking, they are walking the walk.”

In spring 2020, Kelley was taking an organic chemistry class taught by Wiegel. Calling it the “doomed semester” because the pandemic closed campus and pushed all classes online, Wiegel was impressed that Kelley still was excelling in the course despite the trying circumstances. He also noticed that Kelley was reaching out to help other students in the class who were struggling to learn in the virtual format.

So, when he could safely reopen his research lab, Wiegel asked Kelley to join his team of undergraduate researchers. Kelley, he says, had the intellect, maturity and personality to hit the ground running, which is exactly what he needed since the experienced members of his research team had graduated or moved on during COVID.

“He’s done amazing work, resulting in two journal articles in preparation for submission,” Wiegel says of Kelley’s synthetic organic chemistry research, which involves making the liquid crystalline displays in electronic devices more stable and less prone to damage from drops and collisions. “I had to do a hard reset on my group last year and he was the ideal man to help me do it. Broc has a tremendous work ethic and is a natural leader.”

Working alongside Wiegel on research has been an invaluable experience, Kelley says. He learned his way around a lab, but he’s also learned how to work as part of a team, accept and learn from failures, and problem solve. All those things will help him in medical school and beyond, he says.

“Getting my feet wet as an undergraduate the way I did with proper mentorship will put me on the road to success,” Kelley says.

Looking to the future

Kelley is not yet sure what path he will follow within the medical field, saying he wants to “keep my mind open and see who needs the most help.”

“I will go wherever there is the biggest need; wherever I can make the biggest difference,” Kelley says of future specialty areas within health care. “There are big shortages of doctors serving underrepresented people in Milwaukee, on reservations and in many rural areas. So, there is no shortage of possibilities.”

While a decade ago he “hit a low that most folks don’t ever hit,” Kelley says he will use what he learned from his struggles to be a better doctor. Those life experiences will give him valuable perspective when working with patients who may be having their own struggles, he says.

Wherever medical school takes Kelley, Wiegel predicts he will do great things. Kelley has “one of the sharpest minds I’ve ever encountered in an undergraduate,” and he has a kindness and gentleness about him that will help him connect with his future patients, Wiegel says.

Kelley hopes that his success will inspire other people from underrepresented populations to dream big and “shoot for the stars.”

“I’m hoping that some of my fellow family and friends who are living on reservations and in inner cities — underrepresented people who often have a hard time getting into schools — will see what is possible,” Kelley says.