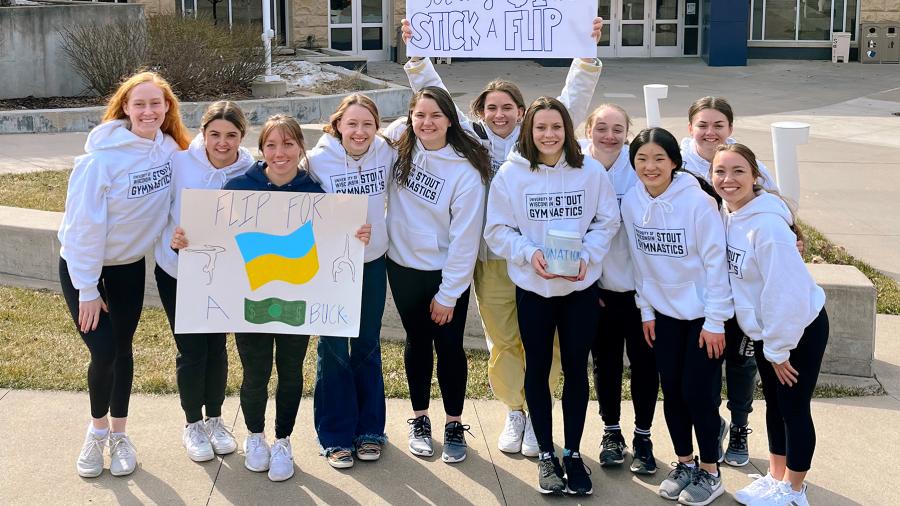 Members of UW-Stout’s gymnastics team promote their #stuckflipforabuck fundraiser for the people of Ukraine. The challenge started at UW-Stout and has spread nationally. / Kailyn Westbrook

#stuckflipforabuck created by coach catches on with university teams, clubs across the U.S.

Competitive gymnasts in the U.S. are flipping — literally — for a fundraising challenge started by University of Wisconsin-Stout’s women’s gymnastics team to help provide humanitarian aid for the people of Ukraine.

Blue Devil Coach Becky Beaulieu initially asked her gymnasts to do a backflip or other flip for someone in exchange for a $1 donation to the International Committee of the Red Cross — Ukraine Crisis Relief. They called it #stuckflipforabuck.

Three weeks later, the effort has hit the viral stage on social media among NCAA schools and gymnastics clubs in the U.S. It also has drawn the attention of Olympians and was part of the NCAA Division I women’s national meet held April 14-16 in Fort Worth, Texas.

“To see what was happening in Ukraine and do nothing about it — my heart was being pulled in that direction,” Beaulieu said. “I’m beyond proud of this.”

Beaulieu never envisioned that #stuckflipforabuck would gather momentum across the country after she adapted the idea from a news story about a youth basketball team doing a three-point-shot $1 fundraiser for Ukraine. It’s similar to the 2014 ice bucket challenge for ALS.

Soon after the Blue Devils’ season ended, team members began to promote the challenge. They shared videos on their Instagram account of Blue Devils sticking landings during competitions this season.

Athletes began promoting it in person too, including holding up a sign on campus and doing flips on the spot for anyone who would go to the Red Cross link on the Instagram account and donate.

The first week, nearly $600 was raised by the Blue Devils, including a $50 donation by Shadae Boone, a 2019 UW-Stout national champion.

Then, the Blue Devils challenged Division I schools the University of Minnesota and Long Island University and Division II West Chester University via social media. Those teams in turn challenged other teams, such as Cornell and William & Mary. 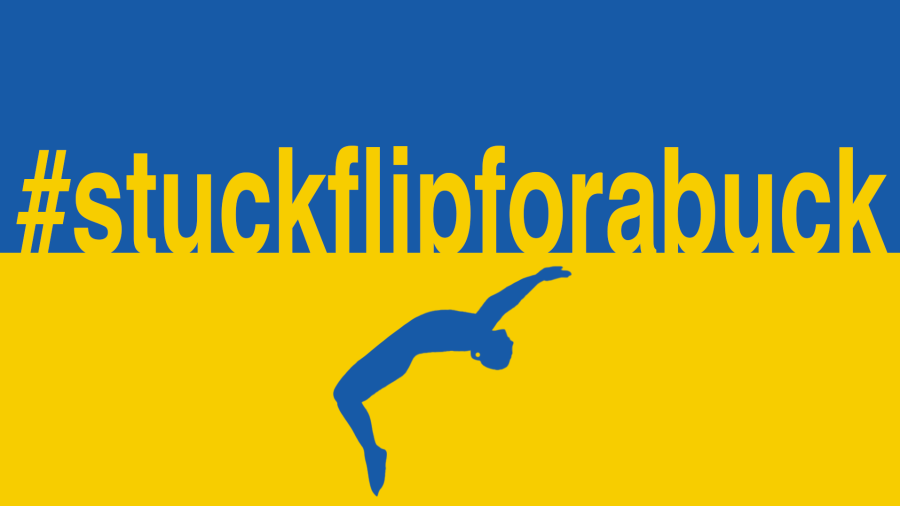 Soon, the head of the Women’s Collegiate Gymnastics Association, Jason Bauer, heard about the challenge and asked coaches across the U.S. to “flip for Ukraine” Beaulieu said, leading up to and during the NCAA Division I national meet.

Bauer asked Beaulieu for a logo, who in turn asked Albricht, of Colfax, a sophomore graphic design and interactive media major. He designed it in two hours. It has been shared on Twitter, Instagram and Facebook accounts across the country.

Then, on what Beaulieu called a “crazy day” she pitched in and helped WCGA and Bauer find three companies with gymnastics ties to donate $1 for every stuck landing in the Division I meet. With 207 of them tallied, more than $600 was raised there alone.

Gymnastics celebrities joined in. John Roethlisberger, a three-time U.S. Olympian and ESPN announcer for the meet, tweeted about the challenge. Former Olympian Chellsie Memmel, with 130,000 Instagram followers, posted about it. Roethlisberger and Memmel both thanked UW-Stout, Beaulieu said.

Roethlisberger, a former University of Minnesota standout and acquaintance of Beaulieu’s, also posted the UW-Stout team photo and challenge on the Instagram account for Flip Fest, a national summer youth camp in Tennessee, and again thanked UW-Stout.

An Alabama volunteer assistant coach, Oleksii Koltakov, is a former Ukrainian national champion. The team was supporting him as he tried to get family members out of Ukraine. Alabama Coach Dana Duckworth posted the challenge with Albricht’s graphic.

Albricht created the graphic quickly, with feedback from Beaulieu, so it could be part of the NCAA meet. He works as a photographer and graphic designer for Blue Devils Athletics, including for gymnastics meets.

“My main goal for the design was to just be clean and simple so we could spread the message across clearly. When the design started to get out there more, especially across the Division I platforms, it felt great knowing that I was able to be a part of doing something like that and especially helping out for a good cause too,” Albricht said.

“This experience has taught me a lot about how much things can influence people, especially the good things like donating to a much-needed cause. Design is extremely powerful, especially in today’s world where we live in social media, so being able to create strong messages can have a big impact on everyone,” he added.

The #stuckflipforabuck challenge is expected to continue into May, with the support of

The challenge now includes an “adult version” with a forward or backward roll or cartwheel and encouraging those participants to tongue-in-cheek “stick the heck out of the landing,” Beaulieu said. She plans to do the adult version with her former UW-La Crosse gymnastics teammates.

She doesn’t have a way to track donations from the challenge through Red Cross but knows that every flip and every dollar donated will go to a good cause and to people who badly need food, shelter and other necessities.

“I feel blessed to be part of it,” Beaulieu said.