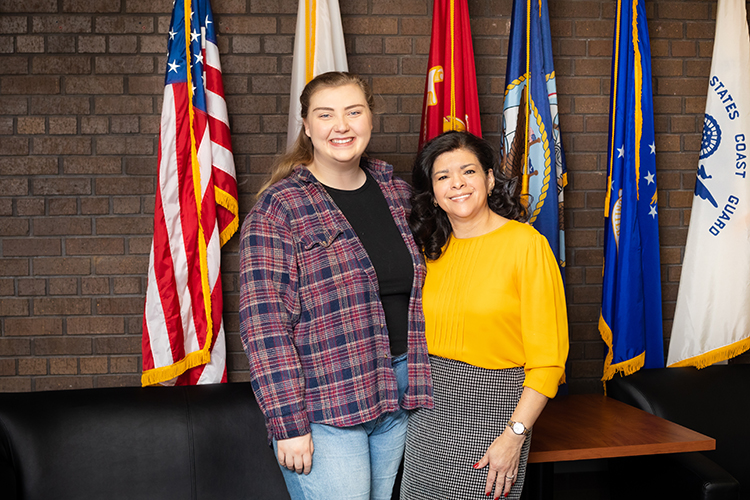 “UWM has changed my life,” says Autumn Carroll (left), who came to the university after serving in the military as an Army combat medic in Kuwait and Iraq. She says the Military and Veterans Resource Center, run by Yolanda Medina (right), helped her find her way. (UWM Photo/Elora Hennessey)

UW-Milwaukee (UWM) is one of the 10 best colleges and universities in the country when it comes to educating and fostering welcoming environments for students currently or formerly in the military.

Military Friendly designated UWM a Top 10 school for 2022-23 in the “large, public” institution category in the latest ratings released Monday. It’s the university’s best-ever status in the annual rankings.

The rankings are compiled by VIQTORY, a company that produces G.I. Jobs and Military Spouse magazines.

Military Friendly schools “strive towards and succeed in the areas that matter most in helping veterans make the transition from the military to school and, ultimately, satisfying careers in the civilian world,” the organization says.

The designation validates UWM’s dedication to the military community, especially since the creation of the Military and Veterans Resource Center (MAVRC) at the university in 2013, said Yolanda Medina, the center’s director.

UWM achieved its highest-ever ranking not necessarily because of the addition of a new program or service, but by compiling all the military-dedicated offerings already in existence at the university into a more comprehensive report for Military Friendly consideration. UWM earned “silver” status in 2021-22, which is two levels below the top-flight Top 10 designation.

“By getting this well-rounded picture of what UWM has been doing for years through this coalition, we have really made a difference in acknowledging what has always been out there,” Medina said. She served in the Marines from 1981-85.

As an example of UWM’s commitment to military and veteran students, the university is one of only about a dozen institutions nationwide that houses all five of the following types of military-related offices or programs on its campus:

“People think the military creates good leaders, but it doesn’t. It creates good followers. You learn to obey orders,” Medina said. “Higher education gives you the critical-skills thinking to become that better leader, a skill set you start to acquire in the military.”

The university also has an active student organization on campus, Student Veterans of America.

“UWM has changed my life,” said Autumn Carroll, the student organization president and a junior who served in the Army as a combat medic in Kuwait and Iraq. Carroll, 25, has been out of the military for four years.

Carroll said she started at UWM taking classes online two years ago at the start of the COVID-19 pandemic. Before the beginning of the Fall 2020 semester, she visited campus for the first time and happened to find the veterans resource center in the Union.

A biological science major, Carroll said that the staff gave her a warm welcome and they became “instant friends.” Carroll now works at MAVRC as the events coordinator.

“Coming into school as an adult is hard enough, but coming in as an adult female veteran is even tougher,” Carroll said. “The military benefits on campus have helped me navigate it all and find the best path for me. I could not be more thankful.”

The MAVRC footprint is expanding as part of ongoing renovations at the UWM Student Union, and the new space will bring the education benefits and Veterans Success on Campus offices under the same roof as the resource center.

The release of the latest Military Friendly rankings coincides with the opening Monday of the “I Am Not Invisible” exhibit on the Union concourse. Normally on display at the War Memorial Center in Milwaukee, the exhibit will be at UWM through March 10 as part of Women’s History Month.

The I Am Not Invisible campaign began in Portland, Oregon, in 2017 to bring awareness to the barriers and challenges faced by women veterans. The exhibit features more than 30 black-and-white banners of women veterans and their service history, current occupations and why they decided to join the military.

Medina and other veterans featured in I Am Not Invisible hosted a conversation in the Union concourse about the exhibit on March 9.