An ‘over the counter’ hearing aid may put treatment within reach 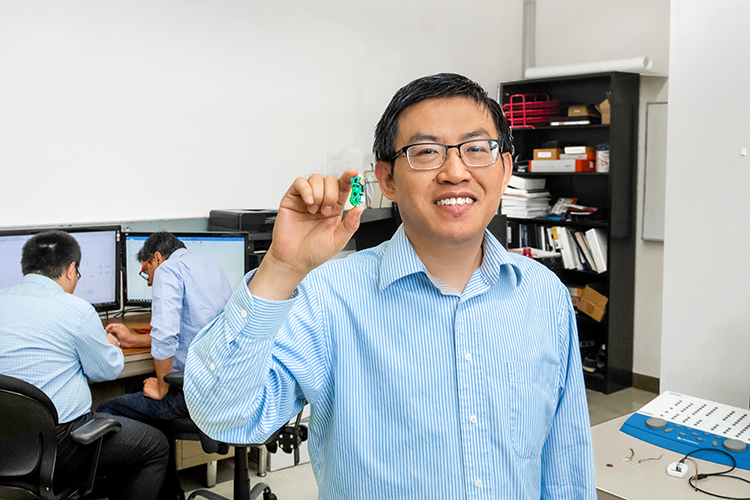 Yi Hu holds a prototype of the hearing device he developed for the over-the-counter hearing device market. The FDA is expected to issue guidelines for approval of OTC devices soon. (UWM Photo/Elora Hennessey)

Yi Hu was always close with his grandfather, who lived in a poor, coal-mining region of China. Around 2005, his grandfather began to complain about hearing difficulty.

“We knew that hearing aids could help him, but living in a small city, he had no access to audiologists, and hearing aids were just too expensive for him,” said Hu, an associate professor of electrical engineering at the University of Wisconsin-Milwaukee.

His grandfather’s dilemma is common. Only one in six people in the U.S. who could benefit from hearing aids use them, according to the National Institute of Deafness and Other Communication Disorders. The reason is primarily cost. Basic Medicare does not cover the devices, a situation that has caused hearing health-care inequity for lower-income and rural residents.

Untreated hearing loss can be serious because it’s associated with dementia, depression, falls and social isolation. 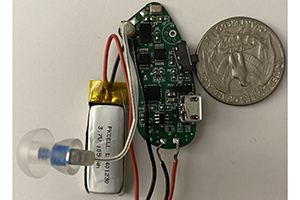 Hu’s prototype is undergoing more modifications to shrink its size, which is difficult to accomplish without losing performance. (Photo courtesy of Yi Hu)

Hu has designed a prototype device that, when paired with a smartphone app, approximates the audiologist experience. He envisions consumers with mild to moderate hearing loss being able to buy an assistive hearing device over the counter, the way you can buy reading glasses at the drugstore without a prescription.

Because Hu’s technology does not require a fitting by an audiologist like traditional hearing aids do, it could bring down the cost of quality hearing-loss treatment from thousands to hundreds of dollars.

Through his startup company, My Hearing Care, established in 2017, he expects to introduce his device to the mass market in 2023.

“If adopted at a large scale, this will revolutionize the hearing industry,” Hu said.

The market for over-the-counter hearing aids will swing wide open once the Federal Drug Administration issues guidelines for them, which is expected soon.

There are already devices on the market called personal sound amplification products, or PSAPs, and some of them have settings controlled by smartphone apps.

But the Food and Drug Administration does not allow PSAPs to be advertised as a treatment for hearing loss. Without an FDA approval process, consumers have no way of knowing which products are effective and which are junk.

Hu’s current prototype is more similar to an entry-level hearing aid than to a PSAP. Users can not only adjust their devices using an app on their smartphones, but they also can perform their own baseline hearing test to obtain an audiogram, the same process audiologists use to prescribe traditional hearing aids.

An audiogram is a measurement of the softest sounds a person can hear at different pitches or frequencies. With data from the audiogram, users can find the settings that fit their hearing needs in different environments.

To understand how unusual Hu’s prototype is, you first need to know some basics about how people hear. When sound waves enter the ear, they cause the eardrum and bones in the middle ear to vibrate. Tiny “hair” cells inside the cochlea – part of the inner ear – convert these vibrations into neural signals that are passed on to the brain through the auditory nerve.

To improve hearing, a device typically needs to do more than simply increase loudness. Hearing assessment also involves the frequencies of the sound waves – how fast the sound waves are vibrating. This equates to the pitch we hear perceived as high or low.

When hearing is impaired, it becomes more difficult to hear certain sounds in the wide frequency range of normal conversation. Consonants, for example, often lie in the higher frequency range of 2,000 to 8,000 hertz. As you age, many lose the perception of the higher-frequency end of the range.

Hu’s device not only allows the user to test their own hearing with accuracy, but it also allows them to customize their settings according to their needs in each new environment – and then save the setting.

There is complexity in the science. For example, a person’s audiogram may indicate that their hearing falls within the normal range, and yet they still have trouble hearing in some situations.

The ability to customize your settings is limited or not available in current PSAPs just introduced to the market, Hu said.

“Only you know what you can hear,” he said. “So, unless we allow users to adjust the device personally, it won’t be an individualized solution.”