All the buzz: Honey bees taking residence at UW Oshkosh 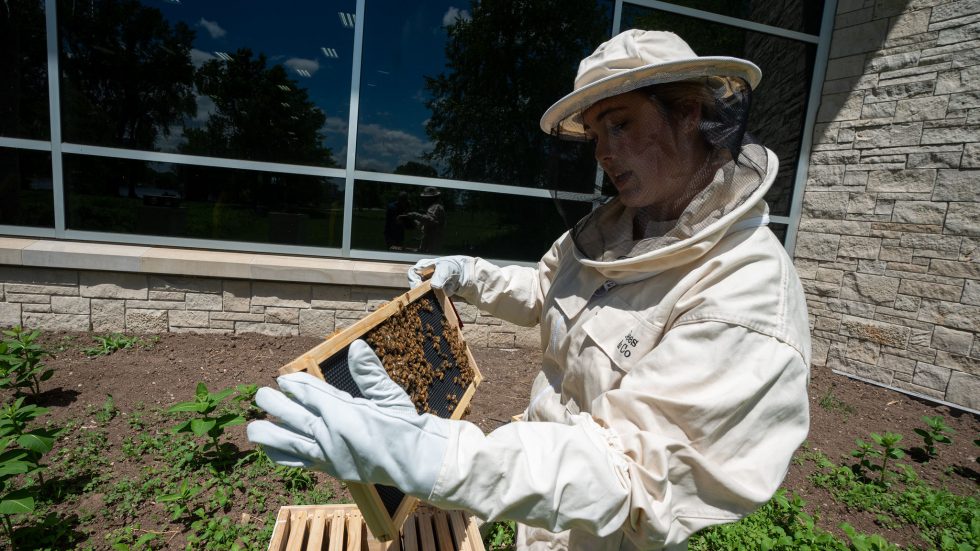 Colonies of honey bees are thriving behind the University of Wisconsin Oshkosh, thanks to a push by student Mariah Parkin to add the valued pollinators to the campus’ sustainability efforts.

Colonies of honey bees are thriving behind the University of Wisconsin Oshkosh, thanks to a push by student Mariah Parkin to add the valued pollinators to the campus’ sustainability efforts.

“I was walking along the path behind the Student Recreation and Wellness building when it struck me that campus would be a great place for some beehives,” Parkin, of Oshkosh, said about her revelation in the summer of 2020. “We have a wonderful sustainability department and the Native Plant Project—why not add some pollinators to the mix?” 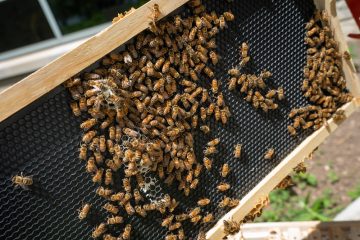 Honey bee colonies were installed May 1 behind the Student Rec building.

Interestingly, Parkin, who graduated this spring with a bachelor of science degree in biology, had never owned her own hives. She learned from other people’s hives and has been soaking in knowledge from Shannon Davis-Foust, a UWO senior lecturer for biology and environmental studies who is an experienced beekeeper and serves as faculty adviser of the Sustainable Beekeeping Club.

“I think the bees’ most important purpose on campus will be to raise awareness of the problems of pesticides affecting pollinators and insects in general—which dawns an understanding of the value of insects in the web of life,” Davis-Foust said, noting there will be an estimated 60,000 bees in the colonies over summer.

To help bees, she says people should reduce the use of chemicals in their yards, plant bee-friendly flowers and mow less grass, letting dandelions, violets and clover grow. Davis-Foust also encourages people to buy local organic food, put up pollinator signs and spread the word to others.

Brad Spanbauer, campus sustainability officer, said there are many reasons to have bees on campus—foremost to help boost the bee population.

“Installing beehives on the Oshkosh campus adds pollinators, which are in decline globally and raises awareness about the important niche occupied by these members of our ecological community,” he said.

Spanbauer added that beekeeping has become a popular hobby for people interested in sustainability and local food. The Sustainable Beekeeping Club is able to offer real-world experience to students who are interested in bees.

She asked, she received 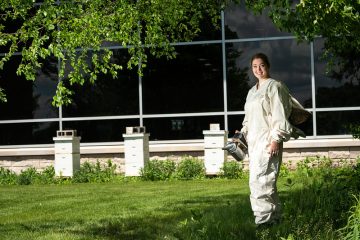 Parkin applied for a Student Green Fund grant last fall and learned in December that it had been approved. The Green Fund is a student-run committee funded by students’ segregated fees, to implement sustainability projects for the Oshkosh campus. Spanbauer said approximately $40,000 was available this year for student projects that promote sustainability on the Oshkosh campus. Proposals may be written by individual students or student groups and are reviewed for potential funding near the end of each semester.

The beehives will be cared for by members of the Sustainable Beekeeping Club. Parkin said the club will be working toward applying for a Bee Campus USA certification for UW Oshkosh. The certification obligates the campus to maintain pollinator conservation standards.

Members of the club will decide what to do with honey if any is harvested.

Parkin will follow UWO bee initiative from afar. She’ll be continuing her education in fall, in pursuit of a doctor of veterinary medicine degree at Ross University School of Veterinary Medicine.

“Ultimately, I would hope this project provides interested students with the opportunity to learn how to keep bees sustainably so that they can go on to one day have their own hives and be part of the beekeeping community,” Parkin said.