“I was kicked out of kindergarten, failed first grade and spent most of second grade in the hallway,” he said. Junior high and high school involved more recreation than the other three R’s of education.

If that doesn’t sound like a deserving winner of a first-time entrepreneurial award, consider:

Landerman now has his own art studio. He exhibits his charcoal drawings and letterpress art in galleries across the country. He was awarded “best of show” at the Stevens Point Festival of the Arts in April, the latest in a long list of accolades for the 24-year-old.

He graduated from University of Wisconsin-Stevens Point with a bachelor of fine arts degree in two-dimensional art on May 18.

“Art was really a refuge for me,” Landerman says of his early years growing up near Stevens Point. “I was always drawing things. I was really forced into this because this is all I was good at.”

In high school, he realized he needed to improve his 2.8 grade point average if he wanted to go to college.  He took night classes at Midstate Technical College then enrolled at UW-Stevens Point, initially planning to major in business. He took an introductory art class his first semester and met Mark Brueggeman, senior lecturer in the Department of Art and Design.

“Mark Brueggeman was the first person who took me under his wing. He said, ‘why are you here? Why are you doing what you’re doing?’” Those questions and encouragement from faculty, staff and students in the College of Fine Arts helped guide Landerman to pursue his passion.

Caren Heft, senior lecturer and director of Edna Carlsten Gallery at UW-Stevens Point, was his mentor. “She forced me to explain myself. If I wanted opportunities, she would help me.”

Heft taught a letterpress class, and he loved the art form. Landerman asked her to employ him as a personal studio assistant.  In exchange for four hours of work each day, he would be allowed to use her studio equipment for four hours.

He used her extensive collection of wood block letters from old proofing presses to create a letterpress art series. He also draws expressive portraits and bold gestural images of animals and birds using charcoal and other mixed media.

Landerman’s drive to learn from other artists, to exhibit and promote his art and run a small business is rare in undergraduates, Heft said. “Alex is one of the most outstanding students I have encountered. He has a clear vision for the future and his place in it.  He works extremely hard, focused on becoming a self-supporting professional artist.”

Landerman was awarded the first-ever Hipstamatic Entrepreneurship Award from UW-Stevens Point. The award will annually recognize and award $5,000 to an exceptional graduating student in the College of Fine Arts and Communication Department of Art & Design.

The award was established by two entrepreneurial alumni, Ryan Dorshorst (‘06) and Lucas Allen Buick (‘05), both of the San Francisco, Calif., area. They created Synthetic Infatuation design firm after graduating from UW-Stevens Point, and developed the Hipstamatic iPhone application, among others. The intent is to jump-start a graduate’s entrepreneurial venture.

“This is one more way the university has shaped me. This award will help me focus fully on making artwork,” Landerman said. He will buy equipment and supplies needed to continue his business, the Art of Alexander Landerman.

“I came into this program and became a very different person,” he said. Instead of being told what he couldn’t do, UW-Stevens Point faculty and the arts community had such a positive effect on Landerman that they are part of his growth and success. The message he received here was: “If you don’t do well, you’re not living up to the potential we see for you.”

That was a powerful motivator for him.

“I’ve been in an environment influenced by the right people who love and enjoy their jobs,” Landerman said.

He is fully aware that only 3 percent of artists make a living at their passion. He’s determined to be among them. In addition to making art, he plans to apply for additional grants, residencies and assistantships to add to his already long, impressive resume. And someday, Landerman hopes to give back what he got from UW-Stevens Point. 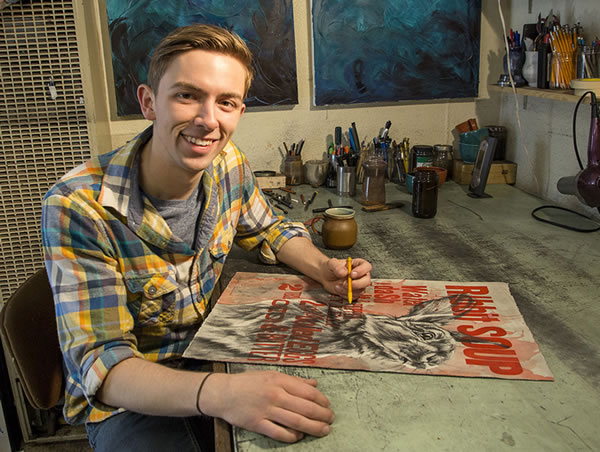 Alexander Landerman in his Stevens Point studio with a drawing from his rabbit series.