EAU CLAIRE — Brian Tessmer is eager to earn his bachelor’s degree in nursing but with a job in Marshfield and wife who teaches in Wisconsin Rapids, the central Wisconsin native has little interest in relocating to attend college. Earning an associate degree from a two-year campus and then pursuing a completion degree at another institution also is not appealing to him.

Fortunately for Tessmer and other talented students with strong ties to central Wisconsin, a 25-year-old partnership between the University of Wisconsin-Eau Claire and Ministry Saint Joseph’s Hospital in Marshfield enables them to pursue their academic and professional goals without leaving behind jobs and families.

“This is the perfect fit for me,” said Tessmer, a senior who already is working at Ministry as a certified nursing assistant. “I’m working at a hospital where I’m exposed to best practices while I’m earning my nursing degree from a great school. Having school and work in one campus has made it easier to do both. And I’m doing it close to home, which supports my wife’s teaching. I wouldn’t be able to fit it all in if not for the UW-Eau Claire program in Marshfield.”

The university’s partnership with Ministry allows students to earn a bachelor’s degree in nursing from UW-Eau Claire while taking UW-Eau Claire classes in Marshfield. State-of-the-art technology in classrooms in Marshfield and Eau Claire bring nursing students and faculty from both sites together for interactive discussions and learning. All nursing classes offered at the Eau Claire and Marshfield sites are available to students in both locations. Clinicals, advising and other hands-on learning activities take place at or near the Marshfield site, just as they do on campus in Eau Claire.

To date, 531 nurses have earned nursing degrees from UW-Eau Claire through the Marshfield program, which enrolls 16 new students each semester. Many of the program’s graduates now work as nurses in central Wisconsin, which is home to two large medical centers that employ thousands of nurses and other health professionals.

“This was a pioneering partnership that now is a roadmap for nursing’s future,” said Dr. Linda Young, dean of the College of Nursing and Health Sciences. “Twenty-five years ago university and hospital leaders saw a need for more highly educated nurses in central Wisconsin. Using basic audio technology and dedicated faculty, they found a way to make a satellite nursing program work in a way that was efficient and effective. It’s grown and evolved as students, health care and technologies have changed, but our earliest goal of increasing the number of nurses with bachelor’s degrees in central Wisconsin remains the same.” 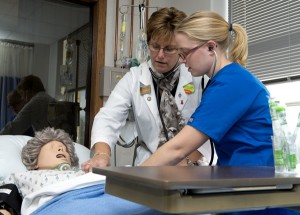 Suzanne Voros, a clinical instructor at the UW-Eau Claire nursing program’s Marshfield site, and then-nursing student Kay Wiedenbeck worked together in the clinical skills lab in Marshfield. Wiedenbeck, a native of Wausau who graduated in December, is now a registered nurse participating in a residency program at the University of Wisconsin-Madison.

When university and hospital officials established the program a quarter century ago, it was the first known agreement between a public higher education institution in Wisconsin and a private health care agency, and the first program in the state to use two-way telecommunications to teach nursing at an off-campus location.

“We were on the cutting edge and we didn’t even realize it at the time,” said Marcia Bollinger, a retired media specialist who helped launch and then maintain the UW-Eau Claire nursing distance education program. “Our approach was different than anything else being done. Now it seems basic, but then it was innovative. It was challenging for our faculty and students, but it also was exciting. That it worked so well and continues to be so successful is a compliment to people at UW-Eau Claire and at Ministry who had the vision to make this happen.”

With health care becoming even more complex, baby boomers aging and many nurses preparing to retire, the demand for highly educated nurses soon will skyrocket across all of Wisconsin and the United States, Young said.

In 2010, the Institute of Medicine released a report, “Future of Nursing: Leading Change, Advancing Health,” which includes among its recommendations raising the education level of the nursing workforce. Specifically the report called for:

In February, Competitive Wisconsin Inc.’s “Be Bold 2: Growing Wisconsin’s Talent Pool” report included nursing and health-related professions as one of five skill clusters around which the state’s talent development must focus because of high demand. The report states that nearly 60 percent of Wisconsin’s registered nurses are age 45 or older, and more than 46 percent plan to retire during the next nine years.

Partnerships among academic institutions and private organizations, as well as the use of technology in nursing education, are among the recommended strategies for meeting those goals, Young said.

“We have been doing for 25 years the kinds of things that many organizations now just are talking about as we all look for ways to better meet the talent needs of the health care industry,” Young said. “We have in place a successful, longstanding partnership program that can be a model for other nursing education programs. It’s also something we would like to replicate with organizations in other communities if we can find the resources.”

Most of the students who enroll in the Marshfield program are from central Wisconsin, many are nontraditional students for whom relocating would be difficult, and most want to remain in the area after earning their degree, said Dr. Robin Beeman, assistant dean of nursing for UW-Eau Claire at the Marshfield site.

“I would say half of the graduates work as nurses at Ministry and at least 75 percent stay in central Wisconsin,” said Beeman, who has been with the program for 20 years. “Having a pool of highly educated nurses who already are in the area and want to stay here is helpful to health care organizations. It’s easier and less expensive for them to recruit nurses who have strong ties to central Wisconsin.”

With Ministry and other Magnet hospitals — hospitals that earn the Magnet distinction by offering a proven level of excellence in nursing care — requiring that their nurses have bachelor’s degrees, the UW-Eau Claire program has become even more valuable, Beeman said.

The Marshfield program appeals to many students because they can complete their entire nursing degree program through UW-Eau Claire in Marshfield, rather than earning an associate degree at one school and then going to another for a nursing completion program, Beeman said.

“Students like it because it’s a more direct path to their bachelor’s degree,” Beeman said.

Mark Knauf, a member of the first class to graduate from the Marshfield program, said the quality and the convenience of the program were equally appealing to him.

“I was fortunate that they started the bachelor’s program here at the same time I was thinking about my education,” said Knauf, a 1990 graduate who now works as a nurse practitioner at the Marshfield Clinic. “I wanted a bachelor’s degree because I knew it would be much more beneficial to me in the long run. UW-Eau Claire’s nursing program had a good reputation and I wanted to be part of it, but I also wanted to stay here to save money while I earned my degree. It was a great experience because I had good faculty who pushed me, and the connections with the Marshfield Clinic and Ministry Saint Joseph’s Hospital set me up for a great future.”

Tessmer agreed, saying the program has been life changing.

“As an employee of Ministry Saint Joseph’s Hospital, a UW-Eau Claire student, a person doing the Ministry Health Care Nurses for the Future tuition reimbursement program, and someone who will be a nurse intern with Ministry this summer, I need to say thanks to all the parties involved,” Tessmer said. “It’s given me great experiences, including a chance to travel. I studied in Scotland for a semester and I had clinicals at Rosebud in South Dakota. At the same time I grew up in central Wisconsin, my wife works here, and I want to continue to live here. Someday I’d like to work at Ministry Saint Joseph’s Hospital as a nurse. This program is helping me do all of these things, which I’m not sure otherwise would have been possible.” 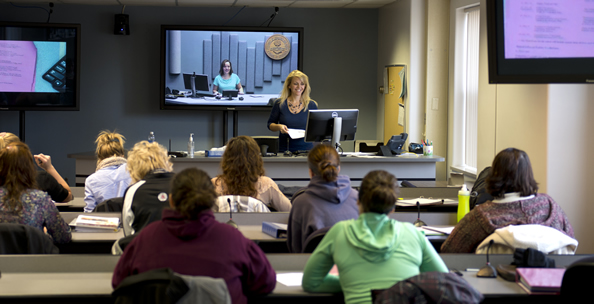 State-of-the-art technology in classrooms in Marshfield and Eau Claire bring UW-Eau Claire nursing students and faculty from both sites together for interactive discussions and learning.