Menomonie, Wis. — Going into their animation class last fall, University of Wisconsin-Stout entertainment design majors knew they would be assigned the obvious — an animation project or two.

That in itself was exciting because they were getting into the heart of their undergraduate course work.

Then they learned from Assistant Professor Ursula Murray Husted exactly what their main assignment would be: In groups, they would be creating animated music videos for a nationally recognized alternative band, They Might Be Giants.

The idea to use the class to collaborate with a band came from Husted. “I’m always looking for ways to get my students more involved in their projects and thought that making music videos for a real band would be a fun challenge,” she said.

The band had a new album, “Nanobots,” and not only agreed to let UW-Stout students create a music video but proposed a contest: The best animated video from four teams in the class would be named the official music video for that song.

Each team was assigned a different song from “Nanobots.”

Suddenly, students realized that their assignment had the potential to go far beyond the classroom. “The band offering to make one of our music videos official was really exciting, but it also left a lot of pressure for us to do a good job,” said student Samantha Belhumer, of Rochester, Minn.

The extra incentive was just what Husted had in mind. “It was really exciting to see how the students threw themselves into the project,” she said.

The five students on the winning team worked on all aspects of the video, but they also had specific duties: Belhumer led character design; Amanda Nordman, of Cottage Grove, Minn., was the director; Matt Patten, of West Bend, was lead animator; Ava Broscoff of Howard Lake, Minn., was lead storyboard artist; and Taylor Hewitt, of Wisconsin Rapids, was environment designer.

“They really pushed themselves and produced more sophisticated and advanced animations. I’m proud of them,” Husted said of all her students.

In the winning video for “Sometimes a Lonely Way,” creatures resembling a fairy and an armadillo go about their daily lives while trying to avoid being eaten by giant vampire bats. True to the song’s title and lyrics, the video conveys a sense that life can be lonely, harsh and unforgiving despite its inherent beauty and promise.

A Feb. 16 band Facebook post called the UW-Stout students’ work a “beautiful, original video” and said “Well done, y’all!” In a Tweet the same day, the band said “Bravo! to UW-Stout entertainment design folk who made this original and amazing video to ‘Sometimes a Lonely Way.”

UW-Stout student Daniel Kraft, of Chippewa Falls, left a comment on the band’s Facebook page: “Apparently, I go to school with people that are awesome!”

Team members were energized by the opportunity to work on a real-world project for a well-known band. They Might Be Giants won the first of its Grammys in 2002 for “Boss of Me,” which became the theme song for the popular TV show “Malcolm in the Middle.”

“Studying animation at UW-Stout is possibly one of the most life-changing experiences I’ve had,” Belhumer said.

Patten and Broscoff found the creative process challenging but rewarding.

“It wasn’t until I saw the fruit of our labor in its final stage that I learned to appreciate what animation really is,” Patten said. “We saw these aliens go from quick drawings in a sketchbook to living and breathing things, with real emotion and real problems.”

“As head storyboarder, much of my job was to find places for these ideas and make sure the story could play out during the song,” Broscoff said. “It was interesting how learning happened gradually, and by the end of the class I was much more comfortable and confident and could even apply the same skills to my other classes.” 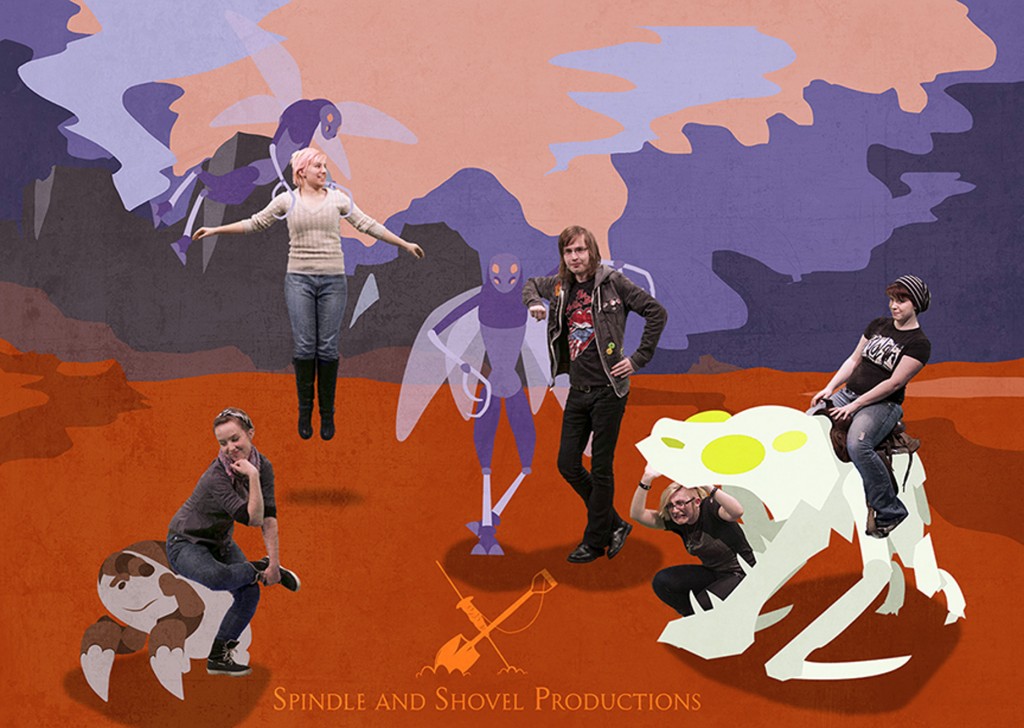 From left, students are seen with the characters they created for a music video for the band They Might Be Giants. From left are Amanda Nordman, Samantha Belhumer, Matt Patten, Ava Broscoff and Taylor Hewitt. 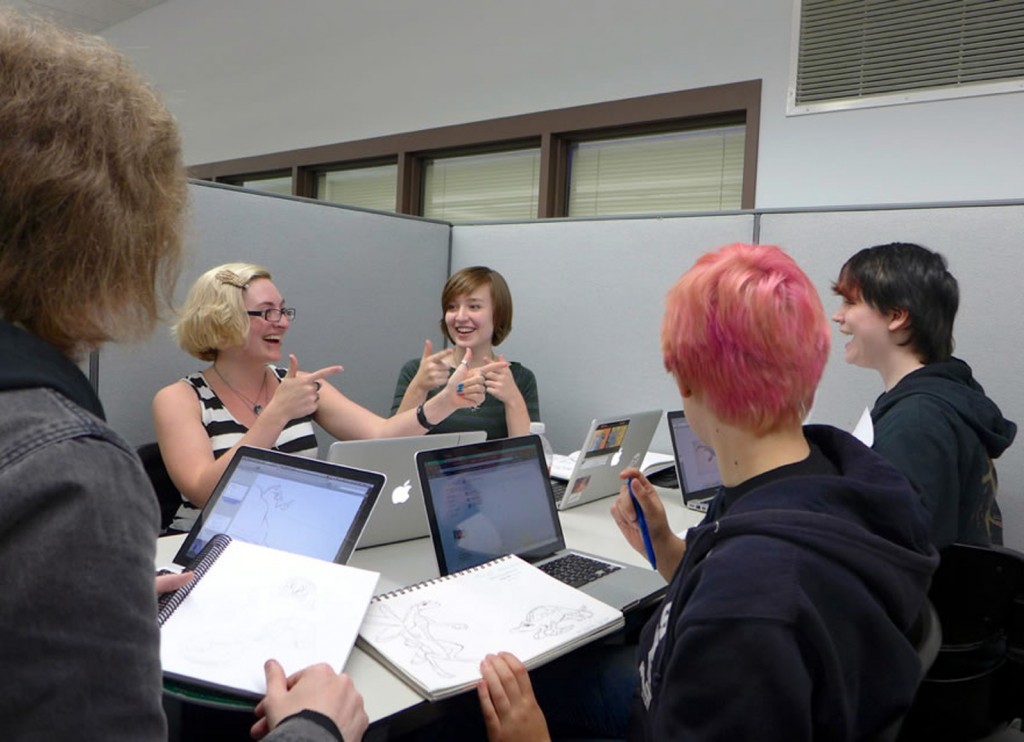