The University of Wisconsin Oshkosh Business Success Center’s unique aviation and aerospace networking and consulting enterprise, AeroInnovate, has, once again, ascended into some rare air.

In August, AeroInnovate was selected as a finalist in the UEDA’s 2014 Awards of Excellence program in the Leadership & Collaboration category. Nominations were received from institutions across the country during a highly competitive process. This week, during the Summit, the finalists were judged on replicability and scalability, originality, impact and sustainability.

UW Oshkosh Business Success Center Director Doug Jarmusz said the award is both an honor and affirmation of the hard work his team and the University have put into AeroInnovate since its start in 2007.

“This national award provides one more recognition and endorsement of effort and talent we’ve invested in AeroInnovate on behalf of our region and the state of Wisconsin for the past several years,” Jarmusz said.

“Our mission at the Business Success Center, and within AeroInnovate, is to harness the knowledge and innovation we have at UW Oshkosh to help supercharge economic development and vitality locally, regionally and throughout Wisconsin,” he said. “To receive this award while nominated along with a field of quality, national institutions proving the economic development power of their universities demonstrates that we are on the right path. It is an unbelievable honor, and we are humbled and proud to receive it.”

Meridith Jaeger, who founded and helped establish AeroInnovate–now serving as executive director of the Wisconsin Family Business Forum at UW Oshkosh–presented on the project at the UEDA Annual Summit in Santa Fe, where Summit participants voted on the category winner.

“There were some pretty amazing finalist projects alongside AeroInnovate,” Jaeger said. “I am honored and really proud to bring this award home to UW Oshkosh.”

David Brukardt, associate vice president for economic development for the UW System, said the UEDA award is a testament to the effectiveness of AeroInnovate. Brukardt noted the critical support AeroInnovate has provided to aviation-industry suppliers and other companies Wisconsin economic-development agencies are likewise trying to help establish a stronger and broader foothold in the state as they comply with important regulations.

“What is remarkable about this whole project over the last few years is the amount of collaboration and momentum that it has instilled in an industry that the state can really make a difference in,” Brukardt said. “… It sets a high standard, and it’s a great example of what the University can do when it collaborates across the region and the world.”

Since its 2007 launch inside the Business Success Center at UW Oshkosh, AeroInnovate has evolved and expanded its role as a key partner with the Wisconsin Economic Development Corporation (WEDC) and economic development agencies throughout the state, helping promote and grow the state’s aviation industry. 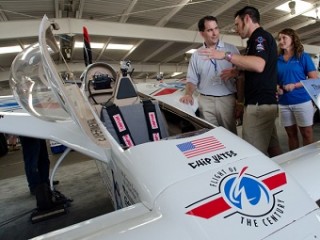 Gov. Scott Walker visits EAA AirVenture 2013’s AeroInnovate pavilion to learn more about the initiative and the aviation and aerospace endeavors it is helping strengthen in Wisconsin

Gov. Scott Walker visits EAA AirVenture 2013’s AeroInnovate pavilion to learn more about the initiative and the aviation and aerospace endeavors it is helping strengthen in Wisconsin.

Close to home at UW Oshkosh, AeroInnovate has helped local government partners including the city of Oshkosh, Winnebago County and the city’s industrial development corporation, CHAMCO Inc., to develop an aviation business accelerator. Ground has broken on the innovative facility, which will be the anchor development within land acquired for an aviation industrial park expansion at Wittman Regional Airport, home to Experimental Aircraft Association (EAA) and other growing general aviation and aviation-related businesses in the New North region.

In 2013, AeroInnovate successfully hosted the first-ever Wisconsin Aerospace Consortium meeting at the EAA.

The Consortium involves aviation and aerospace business executives, industry leaders and entrepreneurs from throughout Wisconsin. It is a new collaborative effort focused on strengthening the state’s position and future in the aviation industry, throughout the nation and around the globe. The WEDC has also strongly supported the initiative.