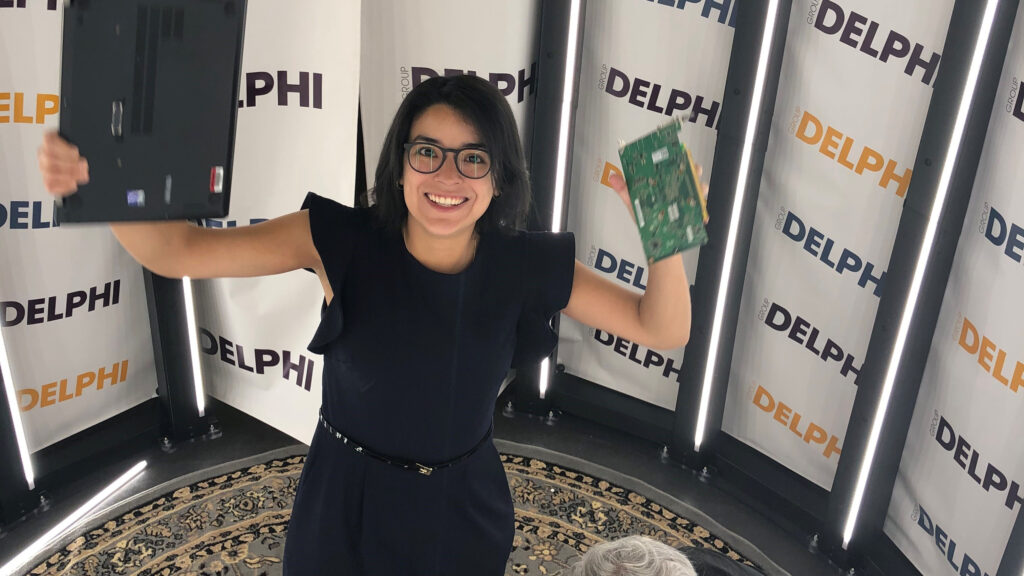 Posing for her 3D statue image with the tools of her trade at Microsoft, Beatris Mendez Gandica is honored to have been selected as a STEM ambassador in the “IF/THEN” campaign.

It’s not unusual for Blugold alumni around the U.S. and the globe to be recognized for major accomplishments in their fields. Yet some alumni success stories stand out — literally, like a big orange statue. 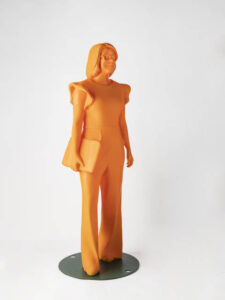 The life-sized statue of Beatris Mendez Gandica of Microsoft and the Nuevo Foundation, one of 125 women in STEM honored by the “IF/THEN” campaign.

Beatris Mendez Gandica, a 2013 University of Wisconsin-Eau Claire information systems and international business graduate, is a security program manager at Microsoft and CEO and founder of the Nuevo Foundation. She recently was chosen as one of 125 women ambassadors of STEM in the U.S. to be immortalized in a display of life-sized 3D statues for the “IF/THEN” campaign from the American Association for the Advancement of Science.

Currently on display in Dallas, Texas, the “IF/THEN” exhibit is the largest-ever collection of women’s statues assembled in one location at one time. The 3D orange statues represent contemporary role models in STEM from a wide range of industries including business, education, entertainment and engineering.

Mendez Gandica, who received an Outstanding Recent Alumnus Award from the UW-Eau Claire Alumni Association in 2019, established the Nuevo Foundation in 2018 with a mission to prepare underrepresented minority youth to become leaders through discovering STEM.

“I discovered computers at age 10 and coding as a freshman in college,” she says. “Realizing that underrepresented students weren’t being exposed to STEM or coding role models, I started Nuevo Foundation to teach young students to code. I want more kids to have opportunities in technology and follow their passions.”

As of late summer 2021, the Nuevo Foundation has offered coding and other tech classes to more than 10,000 children in 31 countries and Puerto Rico. In reflection of this work, Mendez Gandica received the 2019 Hispanic Association on Corporate Responsibility’s Young Hispanic Corporate Achievers’ 40 under 40 Award, each recognized for leadership in their communities and their corporations. 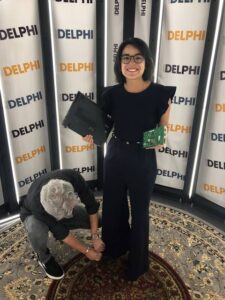 The process of creating the life-sized “IF/THEN” statues involved each model posing in this special photo booth which captured their 3D likeness for the printer.

Mendez Gandica is based in Seattle and is currently working remotely from Berlin, Germany. She will be traveling to Dallas later this month to visit the “IF/THEN” exhibit before it concludes at the end of October, at which time the statues will be off to various smaller-scale installations around the country.

“I have many plans this month in recognition of Latinx Heritage Month, and it will be wonderful to visit the exhibit at this special time. Out of all 125 statue models, seven of us are Latinas, and 20 of us are in computer science,” she says, adding her hopes that everyone who visits the “IF/THEN” statues in Dallas or somewhere else will seize the moment to honor women role models.

“If you happen to see one of the orange statues, please take a picture with it. It’s not often that you will stumble across a statue of a woman.”

Mendez Gandica stays in contact with several UW-Eau Claire faculty members, keeping them updated on her career and exciting news like the statue exhibit. One of her former professors, Dr. Judy René Sims, professor emerita of communication and journalism, was thrilled and not at all surprised when Mendez Gandica shared this honor with her.

“Bea has been using her education and voice to empower young women to change the world through achievements in STEM,” Sims says. “She is a leader and an unstoppable force who believes that young women can and will create great things in the future through science and technology.”

As for her own interpretation of being seen as a national role model, Mendez Gandica is humbled and fulfilled by seeing that her work is bringing impressive results.

“It’s crazy to think that someone like me could become a model for an exhibit honoring women in STEM, but it’s proof that STEM is for everyone, not just a few. I am passionate about teaching coding to kids and showing them that anything is possible.”