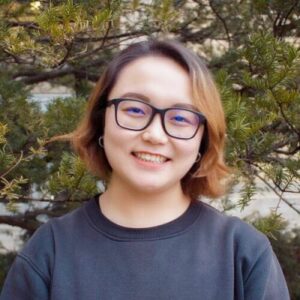 When she was young, Gesangyangji would stare at the peaks on the mountains surrounding Lhasa, her birthplace in the Tibetan Plateau. They were covered in snow. But as she grew up she noticed the snow disappearing, the white lines chased up the mountain by gray and green rock.

“I was wondering,” she said, “Why is this happening? What can I do about this?”

Gesangyangji, who goes by Gesang, found an answer years later. In 2018 she moved to Madison to work on an M.S. in Atmospheric and Oceanic Sciences. In the program she studied air quality over the Tibetan Plateau—those skies that held the mountain peaks from her youth—and sought to discover whether an observer could see sources of energy, like from buildings or transportation, via satellite.

But the next year the plan changed. Missy Nergard, the Director of Sustainability at UW–Madison, approached Gesang’s advisors, Tracey Holloway and Dan Vimont, with the idea of researching how one could use climate data to inform building energy design. The idea interested Gesang, and she altered the course of her research.

“Buildings have been designed for the past climate because all those building design metrics we have are calculated from historical weather data,” she said. “So what we are thinking is, as the climate is changing, if we use projected climate data to calculate those building design metrics, how different would [the buildings] be? Would our current heating and cooling systems have any problems in the future climate?”

Gesang discovered that our buildings will need to service different demands. “By the end of the twenty-first century,” she said, “building cooling [demand] in Madison will be very similar to Montgomery, Alabama, while building heating will be very similar to Louisville, Kentucky.” This means that building design will need to change. Southern cities use electric heating units, which can serve buildings that do not regularly contend with sub-freezing temperatures. If Madison requires less heating, its buildings could switch from natural gas to electric heat. Current cooling systems might also be undersized for the warmer Wisconsin climate in the future, which could cause them to underperform or fail.

“The implications are enormous,” Vimont explained. “Because not only is it just how you design buildings, but it’s how you design for energy needs in the future. There may be large stretches of the U.S. that in the future will no longer need heating systems. There may be places in the north—Northern Wisconsin, for example—that right now don’t really worry about air conditioning but that will have a regular need.”

Gesang’s way of thinking about climate and building design seems obvious. But it hasn’t been considered before—because “it’s really hard to change industry standards,” Vimont said, and because it involves complex data modeling and coding. Other researchers have only studied certain design metrics or limited themselves to specific buildings. Gesang’s research, however, covers the city of Madison and will expand to the buildings across the east coast before projecting how climate change will affect building design in the entire United States. While other studies typically use a single climate model, which causes biases, Gesang’s averages from 24 models And global models for climate change don’t produce accurate hourly variations in data, so Gesang blends them with localized observations, which allows her to calculate metrics for building design. Vimont, an expert in large-scale climate dynamics, called this methodology “novel.”

Gesang’s project also responds to a problem previously unacknowledged by scholars. Different disciplines do not educate themselves about each other’s problems, according to Holloway, who leads a team at NASA that listens to public health organizations’ challenges and considers how they could apply research to help resolve concerns about air quality.

“There are so many gaps in research where two fields bump up against each other,” she said. “Really interesting research questions come out of practical information needs.” 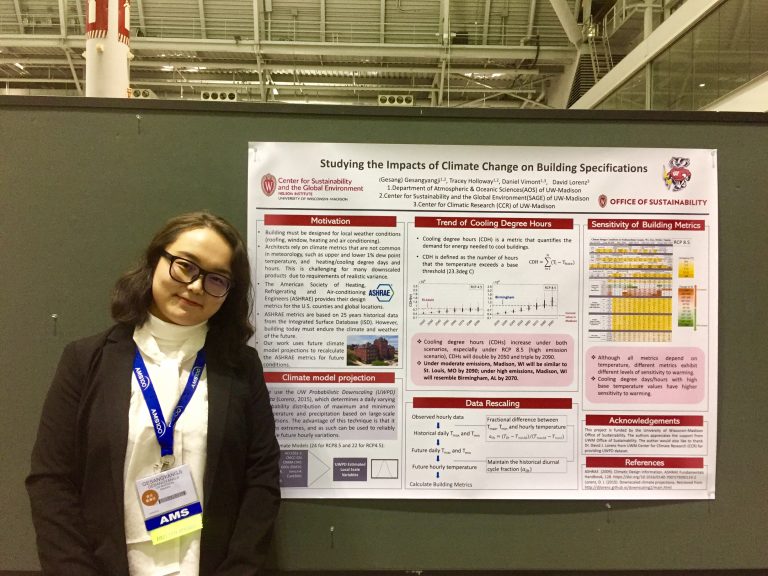 Gesang presented her research at the 100th American Meteorological Society annual meeting, in Boston, January 2020. Her poster was also named outstanding student poster at the conference.

Gesang’s research has succeeded thus far because she works with an interdisciplinary team. She’s a doctoral student in the Environment and Resources Program in the Nelson Institute for Environmental Studies, which has allowed her to assemble a variety of experts on her committee: Vimont; Holloway, whose work considers air quality; Stephanie Henderson, who works on climate data in Atmospheric and Oceanic Sciences; Doug Ahl, the executive vice president for research at Slipstream, a company in Madison working on building energy modeling; and Morgan Edwards, a professor who researches policymaking responses to climate change for the LaFollette School of Public Affairs. The Nelson Institute—along with sponsorship from the Office of Sustainability—have allowed Gesang to bring the experts together to advance her work.

“I found that climate change is not only about climate,” Gesang said “It is a huge, complicated, interdisciplinary topic that involves every aspect of our lives.”

Every aspect—the professional and the personal. Gesang could have accepted a job in Beijing after completing her master’s, but she decided to continue her research at UW–Madison. When she first moved to Madison, it “was very disastrous,” as she fell behind in classes and struggled with English. She was self-funded then, so she worked a part-time job in Union South to make money and adapt to the English-speaking environment. She forced herself to attend workshops and ask a question in her graduate seminar every week. She made friends; she went on hikes at state parks.

And she danced. She does not own a television, but she hung a big mirror in her apartment so that she could watch her technique. Whenever she felt “anxious, or happy, or sad,” she would dance, watching herself in the mirror. “I would take videos of myself and share it with my parents,” she said, “so that they would think I am living a happy life here and they could worry less about me.”

Holloway emphasized that she wanted to ensure that Gesang could use her research to help communities at home. Gesang expects to finish and graduate in May 2023. The next phase of study will connect design metrics to changes in energy consumption, which she hopes will soon change building design, draw fewer resources from the earth, and prevent the remainders of snow atop the mountains in Lhasa from vanishing forever.