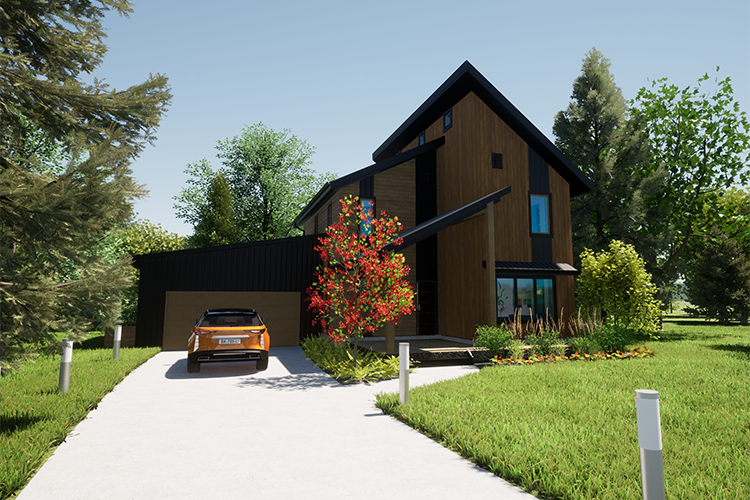 The Wisconsin team’s design shown in this rendering includes features such as an orientation that allows photovoltaic panels to capture the sun’s energy year-round, energy efficient windows, extra insulation and window overhangs that provide shade in the warmer months.

That’s part of the reason the U.S. Department of Energy sponsors an annual Race to Zero Solar Decathlon for colleges and universities each year.

For the seventh year in a row, UW-Milwaukee and UW-Madison are teaming up to design a house for the competition and are among the 10 finalists in the new home construction category. The event will be held April 22-24 in Golden, Colorado.

While the contest does generate ideas about energy efficiency, the designs are also created for specific clients. This year’s entry is designed for a couple who want to build a home in Egg Harbor, Wisconsin, according to Zack McGillis, a graduate student in architecture who is the team’s project manager.

“Our clients are looking to move to a new area and start a family of their own,” he said. “It’s good to be able to make this house renewable and provide a family with what they’ve dreamed about,” said McGillis.

Designed to be mass-produced

While this couple is interested in the lifestyle amenities of Door County, the students designed the house so it could be mass-produced. Designing the basic two-story house as two rectangles gives flexibility to the layout.

The student team members from UWM’s School of Architecture and Urban Planning provide the design features that save energy while UW-Madison engineering students develop the mechanical systems that support that goal. The house is designed with the Wisconsin climate in mind, according to McGillis.

Design features of this year’s entry include an orientation that provides the most sunlight on the long axis, allowing slopes with photovoltaic panels  to capture the sun’s energy year-round. Energy efficient windows and extra insulation create an air-tight envelope around the structure. Window overhangs provide shade, allowing for passive cooling in the warmer months.

The design also minimizes the environmental impact of actual construction, according to Timothy Villwock, a senior in architecture and lead designer on the UWM team. The house can be built in two 14-foot modules in a factory. Environmentally friendly features include the use recycled plastics, rainwater collection and a gray water system that can filter water coming out of bathtubs and washing machines for use again.

By building the modules in a factory, the design also reduces material waste and emissions from transportation and construction vehicles, Villwock added. The plan is for local suppliers to be used for lumber and concrete, and materials recycled from other projects can be incorporated into the house.

With its modular design, the number of bedrooms, bathrooms and square footage can vary, but the design the students are presenting for the competition has three bedrooms, two bathrooms and 1,400 square feet.

After two years of virtual competitions, the team will be presenting in person this year. This year’s competition includes entries from all over the U.S. and around the world.

Nine people from the UWM team are going to Colorado including Tanner Brandt, Brandon Zoll, Melissa Fischer, Armando Chavez, Heather Gruber, and Kevin Rezek. Sahara KC, Villwock and Gabrielle Norton will be doing the presentation on stage. “We are all very excited to get the full experience of Colorado and presenting in person,” Villwock said.

Team leads for UW-Madison are Sammie Lundin and Evan Fernandez. Professor Mark Keane of Architecture is the UWM faculty mentor and Mike Cheadle, engineering lecturer at UW-Madison, is the mentor for the UW-Madison part of the team.