Menomonie, Wis. — Esther Tola is very impressed with what she’s learned so far about the United States.

At University of Wisconsin-Stout, in Menomonie and in other parts of west-central Wisconsin, she sees a high standard of living and people routinely obeying the laws and regulations, creating an orderly, progressive society.

Life is not nearly as good in her home country, Benin, in western Africa bordering Nigeria. Unemployment is about 20 percent — just among the limited number of people who have job skills — and more than a third of the 10 million residents live in poverty. Sanitation is poor and the infectious disease rate is high. Only about four in 10 people over age 15 can read and write. 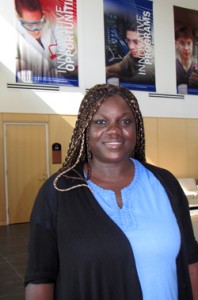 Esther Tola hopes to make life better in Benin, her native country in western Africa, after participating in the Young African Leaders Initiative program at UW-Stout

“We are an underdeveloped country. We want to see how people live here, to understand why the U.S. people are where they are,” Tola said.

Benin’s economy also is stuck in neutral, another reason why Tola is excited to be at UW-Stout as part of President Obama’s Young African Leaders Initiative. The program has brought 500 Africans to 20 U.S. universities this summer, including 25 to UW-Stout.

The Washington Fellows at UW-Stout, 15 males and 10 females from 15 countries, are attending a Business and Entrepreneurship Institute from June 15 to July 26 led by Associate Professor Mark Fenton from the College of Management.

Six other universities are in the business and entrepreneurship track, including Dartmouth, Yale, Northwestern and Notre Dame. The other 14 universities are offering civic and public management institutes.

The 500 leaders will gather in Washington, D.C., at the end of July for a program summit with Obama. Fenton will accompany the UW-Stout group.

The Africans at UW-Stout are taking classes, hearing from guest lecturers and going on industry tours, such as Fairmont Minerals sand mine and Cardinal Glass manufacturing facility in Menomonie.  In addition, they are doing community service work, including working at Menomonie Freedom Fest on the Fourth of July. 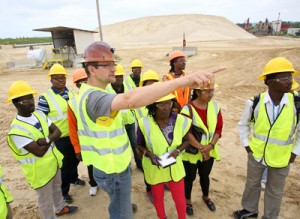 “They are incredibly inquisitive,” Fenton said. “They’ve come here to learn and immediately apply what they learn.”

The Africans also are learning about daily life in the U.S. They saw an Eau Claire Express baseball game at Carson Park and will visit northern Wisconsin, the state Capitol, the Mall of America and more.

The Express game was Tola’s first baseball game of her life — she’d only seen games on TV previously. She said she thoroughly enjoyed the experience, including the entertaining fan contests and seeing children at the game with their parents.

Although she loves the way of life in the U.S., Tola is more excited to return home. Her goal — consistent with the goals of Obama’s program — is to become a leader and help change her country. “Running away won’t solve our country’s problems,” she said.

She has many ideas already from what she’s seen in Wisconsin, including better waste management systems and helping young people find jobs.

“One thing I noticed is that people start working here at a very young age. Even the university employs students. That is not the case in Benin,” she said, adding that it’s unusual for a teenager to have a job there.

A journalist in Benin

Tola has a two-year college degree in business management, thus her interest in jobs and the economy of Benin. 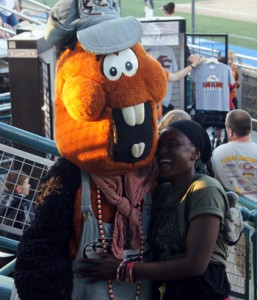 She also has worked as a freelance science journalist. One of her first stories was covering an outbreak of the deadly virus Ebola in Benin. A major outbreak of the virus hit western Africa again in late June.

Tola continues to freelance and also works for a Benin news website, www.acotonou.com, updating the site daily even while at UW-Stout.

Although she is a rarity in Benin, a western-educated female with excellent English-speaking skills, the top salary of her life in Benin has been less than $200 a year. “And I was well-paid compared to others,” she said.

Before she left for the U.S., Tola met with the U.S. ambassador to Benin. She hopes to have him on her side when she returns with ideas on how to effect change in Benin.

“I love the way people (in the U.S.) are in tune with regulations. If we could stick to that a little bit, we could do wonders. There are so many issues in our country, sometimes I don’t know where to start,” she said.

For more information about the program, go to https://yali.state.gov/.