Each year, UW-Eau Claire generates more than $317 million in spending in the Chippewa Valley, resulting in nearly $210 million in annual income and profits for local businesses, more than $21 million in tax revenue for local and state governments, and jobs for more than 3,300 workers, according to the university’s most recent economic impact analysis.

“The University of Wisconsin-Eau Claire makes a substantial, positive contribution to the economy of the Chippewa Valley region,” the “Regional Economic Impact of the University of Wisconsin-Eau Claire” report states. “It ranks as one of the largest employers in the region with about 1,300 employees, and it brings hundreds of millions of dollars into the region’s economy.”

The regional economic impact analysis was completed by Dr. Wayne Carroll, professor of economics and chair of the economics department at UW-Eau Claire.

“With UW-Eau Claire generating more than $317 million in spending each year, its impact on the Chippewa Valley economy is huge,” said Interim Chancellor Gilles Bousquet, noting that the study defines the Chippewa Valley as Eau Claire, Chippewa and Dunn counties. “This impact is a key element in our strong and lasting partnership with this region.”

These ripple effects, also known as multiplier effects, mean the university’s spending is even significantly greater than its budget would suggest, said Carroll, who used modeling software to help him estimate the university’s total impact on the area’s economy.

The five spending categories combined totaled just over $317 million in 2012, of which more than $156 million was spent locally, the report found. When the multiplier effect is considered, the total impact on the region increased to nearly $210 million annually.

Employee spending is the largest of the five categories, with total spending estimated at about $121 million, of which $65 million is spent directly in the region. The multiplier effect brings the local impact up to nearly $78 million, the report states.

Student spending is the next largest category, with students spending nearly $76 million annually. About $50 million of that is spent in the Chippewa Valley, for a total estimate of student spending of about $71 million.

The economic impact study also found that UW-Eau Claire has a significant impact on regional employment, Carroll said. There are 2,257 jobs that exist because of university purchases, construction projects, and spending by employees, students and visitors. The multiplier effect brings the university’s impact on employment to 3,369, with UW-Eau Claire having the greatest employment impact on real estate establishments, food services and drinking establishments, and construction, the report found.

Bousquet said he was especially intrigued by the report’s findings regarding taxpayers’ return on their investment in higher education in Wisconsin.

In 2012, UW-Eau Claire received $34.3 million in state tax support. As a result of UW-Eau Claire spending, the state receives revenue from an array of taxes and fees, including income taxes on faculty and staff; sales taxes on spending by faculty, staff, students and visitors; property taxes paid by faculty and staff who own homes; and registration fees for vehicles purchased in the region by faculty, staff and students.

Based on his analysis, he estimates that the university’s operations resulted in about $21.9 million in additional tax revenue at the state and local levels in 2012, or about 64 percent of the total investment in UW-Eau Claire by Wisconsin taxpayers, Carroll said.Since a university education raises graduates’ lifetime earnings significantly, it also raises the stream of tax revenue that state and local governments collect in the long run, he said.

For more information about the “Regional Economic Impact of the University of Wisconsin-Eau Claire” report, contact Dr. Wayne Carroll, professor of economics and chair of UW-Eau Claire’s economics department, at carrolwd@uwec.edu or 715-836-3388. 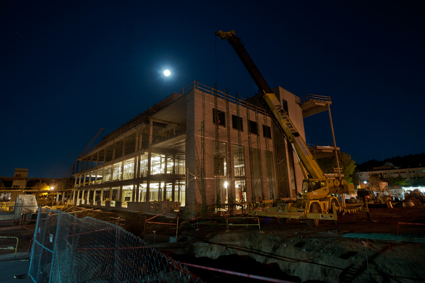 UW-Eau Claire spending in five categories, including spending on construction projects like the new Education Building, above, was among the factors included in a recent analysis of the university’s economic impact on the Chippewa Valley.