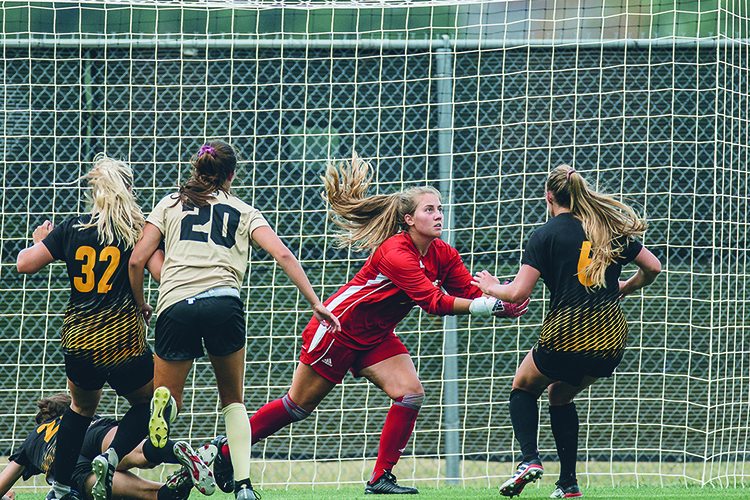 Elaina LaMacchia (in red) makes a save during a UWM match. LaMacchia led the nation in goals-against average in 2021. (Milwaukee Athletics photo)

One of the best women’s soccer players in UWM history continued her career in one of history’s great soccer nations. Elaina LaMacchia signed a professional contract with Pink Bari CF, which spent its most recent season playing in Italy’s second-tier national league.

“It’s always been a dream of mine to play in Italy,” said LaMacchia, who holds dual citizenship, thanks to her Italian paternal grandmother.

Early in the spring season in Italy, she suffered a back injury that sidelined her for several weeks. While she was rehabbing, she enjoyed the summery weather and working on her Italian. She returned before the team ended its season in May.

LaMacchia earned her professional chance by breaking goalkeeping records for UWM, which won 55 of her 67 games. In 2021, she led the nation with her 0.42 goals-against average and finished second in NCAA Division I with her .882 save percentage. In 2019, she set a Horizon League record with a scoreless streak of 1,070 minutes, 12 seconds, the sixth-longest such streak in NCAA history. She holds the No. 2 (2019), 3 (2021) and 4 (2020) spots for goals-against average in UWM’s record books.

LaMacchia’s 2021 season earned first-team All-League honors and the league’s Goalkeeper of the Year award, and she was named a second team All-American by College Soccer News.

But her favorite moment that season was a 1-0 win against 14th-ranked Xavier in the first round of the NCAA Tournament. It marked the second straight season UWM advanced past the tourney’s first round and was UWM’s fourth-ever victory against a nationally ranked team. It also gave UWM its 19th win of the season, which tied a program record.

“No award could compare to the feeling of accomplishing something like that with your teammates,” LaMacchia said.

LaMacchia started playing soccer as a youngster following in the footsteps of two of her older sisters. “I grew up surrounded by soccer,” she said.

LaMacchia, who grew up in Mequon as the seventh of eight sisters, chose UWM after high school because she liked the school, the city and the soccer program.

“Milwaukee’s first attraction for me was the location,” she said. “It is probably one of the most underrated cities. I love it.”

The coaching staff was a key factor. “They have always been transparent with their intentions and judgments, which is something you can really appreciate in the soccer world.”

That support was vital in preparing her for the next stage in her athletic career and personal life. She majored in secondary education because she enjoys teaching and guiding others. When she’s ready, she’d like to move into coaching, she said.

“UWM prepared me on and off the field,” LaMacchia said. “Playing quality soccer helped ease the transition to a faster-paced game and all my teammates, coaches, and staff were an incredible support group. I couldn’t have asked for a better college soccer experience coming into this new chapter.”