Menomonie, Wis. — By day Jim Burritt is an associate professor of biology at University of Wisconsin-Stout. By early morning, evening and weekends, he’s a beekeeper.

Burritt started beekeeping as a high school student in Colorado in the 1970s, and today he and his wife maintain several honeybee colonies at their home in rural Dunn County.

Like thousands of other beekeepers around the world, however, he’s perplexed. Something is killing honeybees. Year after year, many honeybee colonies don’t survive the winter.

Last winter for example, the approximately 70,000 bees in each of Burritt’s three hives died. In the spring, he had to buy more bees and start over. 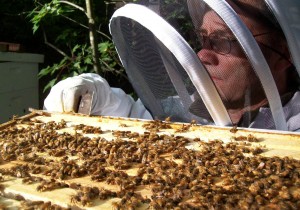 Jim Burritt tends to his bees in rural Dunn County

The problem, known as hive winter kill, is threatening the honeybee industry and possibly even the species itself.

But what exactly is the problem? That’s where Burritt, the biologist by day, is trying to help.

He and several students in UW-Stout’s applied science program have conducted a groundbreaking bee cell study that is receiving international attention. The two-year project, “Honey Bee Hemocyte Profiling by Flow Cytometry,” was published Monday, Oct. 6, by the international journal PLOS ONE. The research can be found online at www.plosone.org/article/info%3Adoi%2F10.1371%2Fjournal.pone.0108486.

Recent UW-Stout graduate Will Marringa was the primary student researcher and serves as lead author for the article. 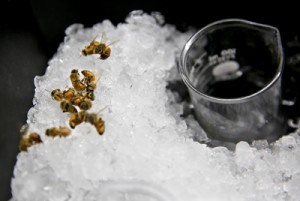 PLOS One is a peer-reviewed, open-access, online publication for science and medicine research, according to its website, www.plosone.org.

Burritt has developed a process by which the immune cells of honeybees can be analyzed and classified. He believes the research provides scientists a new approach in the fight to help honeybees.

“We’re developing a tool with which healthy or diseased honeybees can be better identified and possibly understood,” he said. 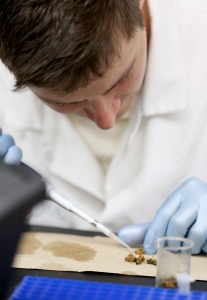 White blood cell analysis is a common tool for studying human health. Burritt is using the same approach with honeybees, whose blood equivalent is hemolymph.

In a lab at UW-Stout’s Jarvis Hall, Burritt, students and lab assistants have been withdrawing tiny amounts of hemolymph — two-millionths of a liter — from chilled bees.

The bees examined in the study were obtained mostly from Burritt’s hives, though several other area beekeepers also provided bees.

Hemolymph is placed in a flow cytometer, which counts, measures and classifies each bee’s cell types, stopping when it has examined 5,000 cells.

Within the hemolymph are the bees’ defense cells, hemocytes.

“For the first time we have pictures and profiles of hemocytes of honeybees. We actually get a lot of information from a single bee. It’s never been studied in this way before. 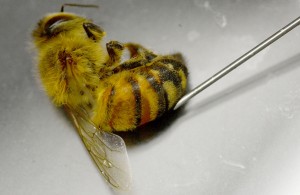 Using a needle, two-millionths of a liter of hemolymph is withdrawn and then analyzed using a flow cytometer

“We believe it’s a new way of looking at honeybee health, but we don’t know enough yet to know if it will solve the problem, if it can be solved,” Burritt said.

The cell profiles generated by the flow cytometer, surprisingly, are very different from one bee to another and from one hive to another “likely representing changing conditions or metabolic needs of colony members. But we will need more researchers to help decipher their meaning,” Burritt said.

The die-off of honeybees in the Upper Midwest could be related to infection from non-native Varroa destructor mites, along with other mites and infectious agents. Varroa mites are “extremely successful parasites and transmit viruses like crazy,” he said. 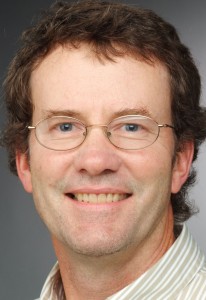 Marringa, who graduated in the spring with an applied science degree and emphasis in biotechnology, began working with Burritt on the study in 2012.

Initially they were screening bees for deformed wing virus, but upon realizing most bees were infected they switched their focus to how bees were fighting infection.

“This method could allow scientists to eventually diagnose the pathology of honeybee colonies based on common patterns in immune cell populations,” said Marringa, who added that the study has caught the attention of other universities interested in the approach.

Burritt and Marringa worked with the Dunn County Beekeepers, www.dunncountybeekeepers.org, while developing their study. Marringa presented their research in January at the American Beekeepers Federation Conference in Baton Rouge, La. 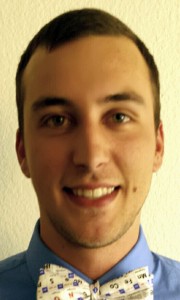 Since graduating, Marringa, of Waupaca, has enrolled in a medical laboratory science training program in Aurora, Colo. He learned many research skills while working with Burritt, he said, and also fell in love with beekeeping.

“This research taught me how to operate as an individual researcher,” he said.

Burritt’s training is in immunology, working mostly with white blood cells from humans and mice. He has published 37 professional articles and teaches classes at UW-Stout on general microbiology and infectious disease.

The project received research funding from the Honey Bee Health Task Force of the North American Pollinator Protection Campaign, http://pollinator.org/nappc/index.html, as well as support from a Student Research Grant from the UW-Stout Access to Learning Program and the UW-Stout University Foundation.