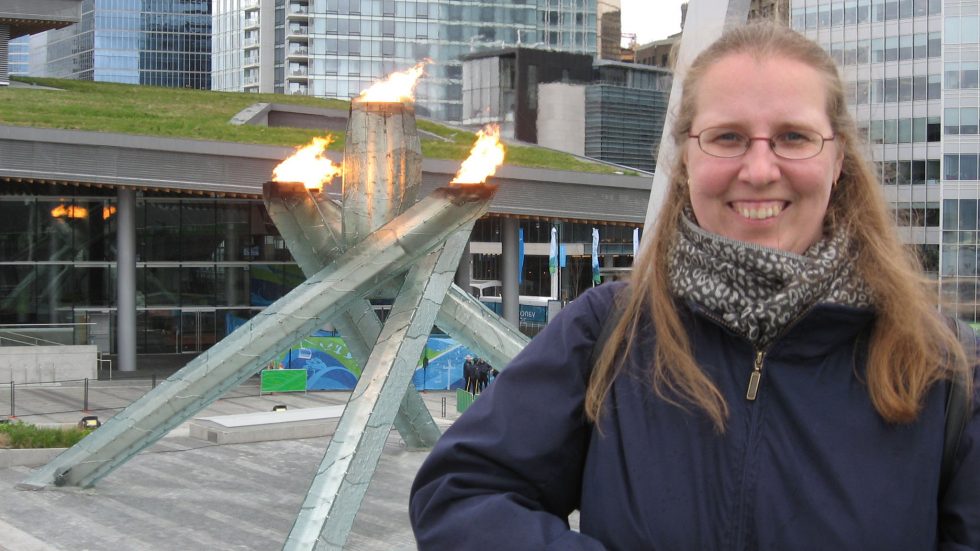 Heike Alberts with the Olympic flame at the Vancouver Paralympics in 2010.

As a geographer and sports lover, University of Wisconsin Oshkosh’s Heike Alberts naturally adores the Olympics, especially the winter games that showcase some of the world’s most beautiful snowcapped landscapes.

A native of Berlin, Germany, Alberts has been an avid fan of the Olympics for decades. She attended the 2010 Paralympics in Vancouver and dreams of attending the Olympics live some day.

In her academic life, Alberts has studied how Olympic venues can be reused or repurposed after the Games, and the impact bidding for a large-scale event like the Olympics or FIFA World Cup can have on urban development in the cities vying to host.

In the classroom, Alberts likes to incorporate current events, and especially sporting events like the Olympics, into her teaching.  She published an article in 2014 in the Journal of Geography titled Using Sports Examples in Geography Courses.

“I have found that using sports as an example can take the edge off talking about some sensitive subjects and can serve as an entry point for discussion,” she said.

For example, the 2012 Summer Olympics took place during Ramadan, which opened up conversations about athletes and cultural practices like fasting and wearing a hijab. 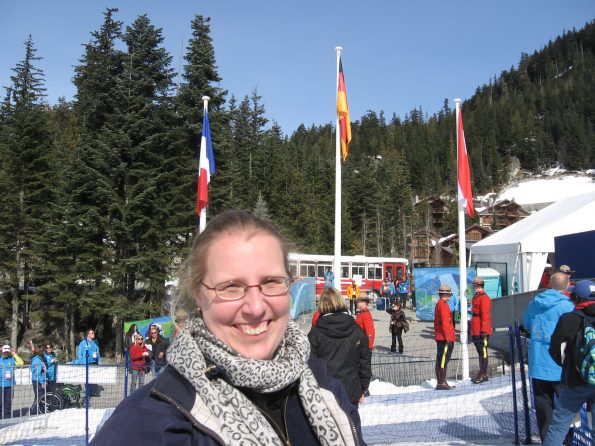 Heike Alberts at the the medal ceremony site at the Vancouver Paralympics.

Alberts said the Olympics offer a unique opportunity to explore a number of sub-disciplines that geography has to offer. She noted that as one of the broadest fields of study, geography combines aspects of the social and natural sciences.

From a political geography perspective, Alberts said teachers can lead a discussion in class about whether or not China should have been selected to host the Olympics given its record on human rights.

For a case study on migration, she said students might look at how some athletes with dual citizenship or family connections to more than one country may physically move in order to compete. Or students could write an impact paper about how some countries like Bahrain have been known to buy athletes to compete for them.

Alberts added the list of possible Olympic connections to geography topics continues with the economic impact on a host city, how rooting for our home country can reinforce your identity, the environmental impact of specialized structures constructed for the games or even the impact on the health of athletes competing at high attitudes.

“I just love geography because it is so diverse and it is such a good way to ‘catch’ a lot of these topics in the classroom,” she said.

Alberts joined UWO’s geography department in 2003, after earning a doctorate from the University of Minnesota.

Top photo: Heike Alberts with the Olympic flame at the Vancouver Paralympics in 2010.