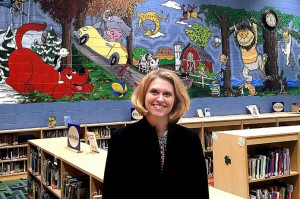 Tami Weiss painted a large mural at River Heights Elementary School to recognize the work of illustrators, the artists of children’s books. The mural has also inspired children to read. See video at www.leadertelegram.com.

MENOMONIE — If pictures are worth 1,000 words, a wall at River Heights Elementary School has plenty to say.

The mural created by a parent and art teacher depicts characters from about 32 different books and 30 illustrators.

Tami Weiss, who is the executive director of Arts Integration Menomonie, or AIM, and teaches art at UW-Stout, took about four or five weeks to complete the roughly 60-by-10-foot mural. She completed the project last week.

With characters from classic books like Dr. Seuss’s “Green Eggs and Ham” and Maurice Sendak’s “Where the Wild Things Are,” the mural stretches across one wall of the library and media center, depicting children’s books characters in the four seasons.

The mural originally was meant to be smaller, but gradually more children’s book characters were added to fill the wall, Weiss said. She added some more contemporary books, including the Harry Potter series.

Katelian Bossany, 9, a third-grader at the school, said that while Weiss was working on the mural she noticed there was no Charlotte the spider from “Charlotte’s Web.” Yet, Wilbur the pig and Fern were there.

“I thought that was a big mistake,” Bossany said.

Weiss then added the famous spider to the mural.

“It looks beautiful,” Bossany said. “It looks just like the book.”

Enzo Parent, 9, also a third-grader at the school, said he likes how the seasons flow along the mural.

In one corner is “Splat the Cat” wearing a River Heights Elementary School T-shirt and holding crayons.

“It represents at River Heights we have fun and we learn,” Parent said. “I also like the Waldo. Just like the books you have to find him,” he added referring to the popular “Where’s Waldo” books.

“It also creates a welcoming climate in here,” Kolden said, gesturing around the library. “It makes this a place people want to be.”

“I first and foremost did this as a mom who really likes the school my kids go to,” Weiss said, who donated her time. “It is a way to give back.”

The mural is painted from satin finish latex paint.

“The surface of the mural is most challenging,” Weiss said. “It is cement block and very porous. I found myself painting with jabs to get it into the holes.”

The mural is also integral to the mission of AIM, an organization developed to enhance teacher confidence and well-being and to improve early career teachers’ retention. It is a cooperative program of UW-Stout, the Mabel Tainter and the Menomonie school district.

“The mural obviously encompasses everything we believe in — the importance of art in education,” Weiss said of AIM.

A grand opening featuring a dedication of about 40 books bought by AIM for the elementary school is scheduled at 5:30 p.m. Family Night April 28. The books will have a tag showing that they are donated for the River Heights Elementary School teachers, and each book will have a teacher’s name.

Weiss has reached out to all the book illustrators so they know about the mural.

Reprinted with permission
This story appeared in the Feb. 24 Leader-Telegram