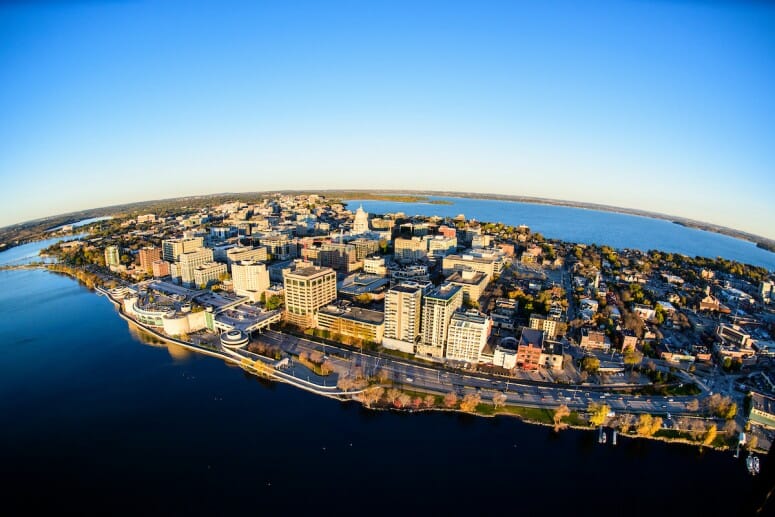 Madison is increasingly being noticed as a hub of tech innovation, inspired in part by UW–Madison technology and graduates. PHOTO: BRYCE RICHTER

The boom is fueled in part by UW–Madison, which provides cutting-edge research, entrepreneurial graduates and researchers, and a well-educated local workforce that motivates some employers to open offices in Madison.

In 2020, the country’s biggest tech migration increase took place in Madison, according to LinkedIn data published by Big Technology on December 17, 2020.

In addition to these statistics that show real growth, Madison’s growth potential stands out: In 2019, the Brookings Institution and the Information Technology and Innovation Foundation ranked Madison first out of 35 cities with the potential to become innovation hubs. 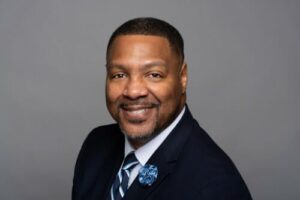 Several big technology companies have had offices in Madison for years, drawn by collaborations and recruiting opportunities at UW–Madison.

“Google, Zendesk, and Microsoft are all here and all recruiting,” said Jason Fields, a six-term Wisconsin State Assembly member who has been president and CEO of the Madison Region Economic Partnership (MadREP) since January 2021.

Google opened its first Madison office in 2007 and now has over 100 employees in Madison; principal scientist and site leader Jeff Naughton, a former UW–Madison professor of computer sciences, told the Cap Times in 2019 that the Madison office allows Google to hire UW–Madison talent.

Zendesk’s Madison team has grown from 5 employees in 2013 to over 300 in 2021, and the Madison office is Zendesk’s Midwest regional hub.

Microsoft’s Gray Systems Lab (GSL) is based in Madison, and the GSL team collaborates on research projects with UW–Madison graduates and faculty who are affiliated with the lab. The team designs, develops, and evaluates novel database system technologies, focusing on transitioning the most successful concepts into Azure Data products. Microsoft also owns Madison-based video game development studio Roundhouse Studios. 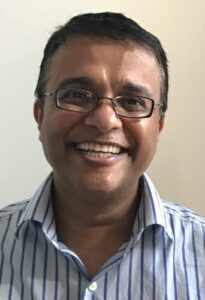 To drum up enthusiasm for tech entrepreneurship among UW–Madison students, Patel launched the venture creation program CS NEST and the Creative Destruction Lab. He says having big tech companies in Madison burnishes the city’s image as a technology hub.UW–Madison computer sciences professor Jignesh Patel’s first three technology startups, spinoffs of his research, were acquired by Teradata in 1997, Twitter in 2013 and Pivotal in 2015. His fourth tech startup DataChat, founded in 2017, makes data science accessible to anyone. The company has 20 employees and recently received $4 million in funding from Silicon Valley venture capital firms.

WARF Ventures funds promising tech startups based on UW–Madison research, including AIQ Solutions, which came out of the University of Wisconsin Translational Imaging Research Program.

“AIQ is a great example of how UW researchers teamed up to find a novel solution to a real clinical problem, attracted investment from Wisconsin venture funds, and built a product,” said WARF Chief Venture Officer Mike Partsch. “The company’s software platform has the potential to revolutionize how clinicians treat complex diseases, starting with metastatic cancer. AIQ’s ability to make early predictions about both treatment effectiveness and toxicity risk will ultimately extend lives, while decreasing the money spent on expensive yet ineffective drugs.”

UW–Madison’s leadership and expertise in fusion technology and quantum computing are frequently sought out by investors, and WARF recently invested in quantum computing startup ColdQuanta, which uses UW–Madison technology in its product and raised $35 million last year. UW–Madison Physics professor and Director of the Wisconsin Quantum Institute Mark Saffman is the Chief Scientist for Quantum Information at ColdQuanta. Headquartered in Boulder, the company has an office in Madison.

Teams of UW–Madison alumni who launched startups in Madison have had successful exits. In 2018, ResMed acquired Madison-based Propeller Health, a maker of smart inhalers founded by UW–Madison alumni, for $225 million. UW–Madison alumnus Brian Raffel and his brother Steve sold Raven Software to Activision in 1997, and the company continues to produce video games for such well-known franchises as “Call of Duty” and “Star Wars.”

“The Madison Region and UW–Madison have produced great leaders in our tech space,” said Fields. “People understand that these well-known video games and other technologies were created in Wisconsin, and Madison is a great place to work, play, live long-term, and raise a family. These are the assets we have that I think draw people here.”

A commitment to diversity, equity, and inclusion

Fields points out that it’s important to appeal to a diverse variety of tech workers who may want to move to Madison.

“We all know the pitch to the guy from Stanford, but what’s the pitch to the African-American, Latinx, or Hmong person to get them here? We have to send a message that everybody is welcome here,” said Fields, who is also an angel investor and has personally invited the African-American founders whose companies he has invested in to move their businesses to Madison. “We’re talking about innovation, technology, and a welcoming environment. To Generations X, Y, and Z, diversity is important.”

“We’re working on a broadband initiative and housing,” said Fields. “We have to have broadband in our surrounding areas and send the message that we support remote work.”

MadREP is also working on a housing fund in partnership with developers, to attract people who want to stay or relocate here, coupled with a revolving loan fund that does gap financing, so underserved entrepreneurs have access to capital. That includes businesses that surround the technology ecosystem.

“That makes a community whole and feeds into the culture,” said Fields, adding that MadREP is also focused on supporting longtime residents who can benefit from jobs in technology and from roles adjacent to the technology sector. “Kids are phenomenal at technology, and we can show them that they can be a part of this community and be leaders of where this community goes, and if our older population needs to learn a new skill set, technology can help level the playing field.”

At UW–Madison, the Dream Up Wisconsin competition fosters tech innovation for social good, and 2021 winner ConnectRx Wisconsin is a partnership with Epic that aims to integrated Dane County healthcare and social service systems by building on existing electronic health record technology. Second place winner Opportunity Calculator hopes to develop a mobile platform to give workers fast, accurate information about how career and training opportunities could affect their net incomes. Both teams have diverse leadership and community partners.

“DreamUp Wisconsin offers the exciting opportunity for area innovators to apply tech-based strategies to increase the income of 10,000 Dane County residents,” said director and UW–Madison professor Lonnie Berger. “We couldn’t be more proud of the winning teams’ accomplishments and their commitment to both increasing family incomes and decreasing racial disparities in income and employment.”