Journey to U.S. adds up to a long mathematics career for UW-Stevens Point professor 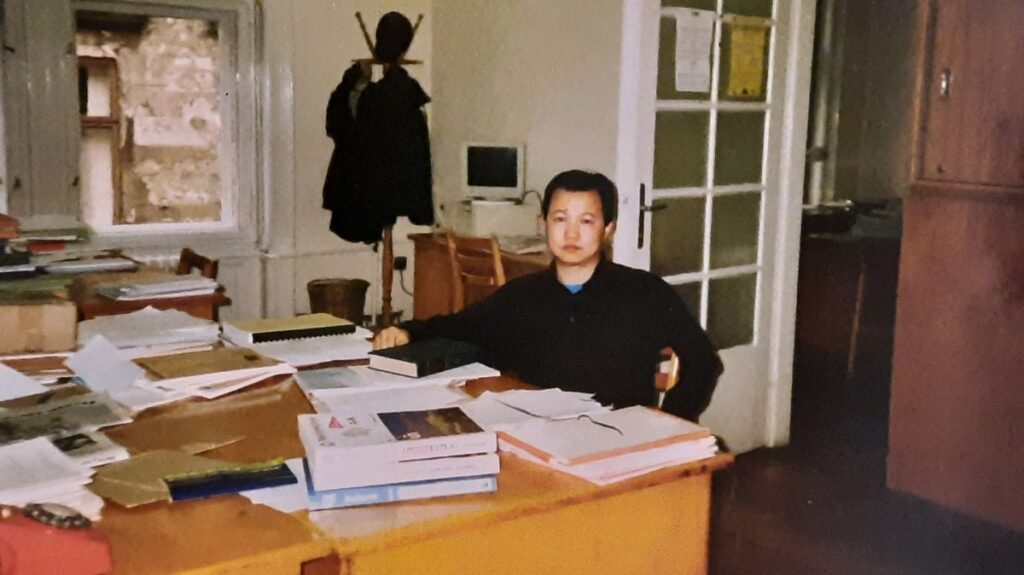 Professor Hurlee Gonchigdanzan studying in Budapest at the Hungarian Academy of Sciences, before coming to the U.S.

Professor Hurlee Gonchigdanzan happily reached his second decade with the UW-Stevens Point Department of Mathematical Sciences just before this school year began. Just before that, he also celebrated the anniversary of emigrating to the U.S. with his wife Gerlee, 27 years ago. The couple hails from Mongolia.

Hurlee can recall the early days of setting up his first American apartment, carrying a 13-inch television set for blocks around the Champaign-Urbana metro area because the transit system bus stops were a bit hard to understand then, with his limited English.

He arrived in August 1995 with three of the four pieces of luggage he and Gerlee had packed in Budapest. A trusted colleague at the Hungarian Academy of Sciences where he was studying helped persuade Hurlee that if he wanted to teach internationally and continue working in mathematics, he should apply for work in America.

Memories of his U.S. arrival day are nearly as vivid for him as they were for Hurlee that first day—the passport agents in Prague with questions about his visa, those first taxi rides and passing giant semi-tractors on the highway in Chicago. The couple settled in student housing at the University of Illinois-Urbana where he had taken a job grading in the math department. They welcomed their son, Chinguun, in 1999. He quickly acclimated to speaking Mongolian with his parents and speaking English to family friends.

While working on his Ph.D., his first teaching assignment was at the University of Cincinnati, after completing graduate studies in English communication.

“It was a challenging assignment as I remember. The challenging part was still my English communication even though I passed an English skills test and was allowed to teach my own class. I learned more English than mathematics in my grad schools,” he said.

Gonchigdanzan searched for a permanent teaching position in the United States while he spent a year as a visiting assistant professor for the University of Louisville.

“I was very proud, I knew I could teach any mathematics class,” he said. “Teaching has always been my passion.”

UW-Stevens Point reached out for an interview in 2001. Just like taking the leap into the unknown on that first trip overseas, he was up for the adventure of a new campus in central Wisconsin.  When he was offered the chance to teach a trial statistics course at UWSP, it was a perfect fit, he said. It was home.

Math colleague and Department Chair Daniel Harnett said Gonchigdanzan has greatly contributed to the long success of the Central Wisconsin Math League (CWML). It’s a valuable outreach program involving area high school math students. Gonchigdanzan has written tests and graded the work of the participating students in the math league for the past 20 years.

Professor G, as he is called in his UWSP math classes, fondly shares that he is now one of the most senior professors in the department. When he’s not in class, he might still be working through problems.

Professor Gonchigdanzan wants undergraduates to understand how valuable a mathematical mindset can be. He said he has put a priority on preparing students. He’s challenged to adjust teaching to varying experiences and skill sets—adjusting for the background of a math major and an economic major in the same class, for example. Some will have to pass professional tests to reach their goals, like the probability exam for students studying actuarial mathematics. Preparing them to succeed is important to Gonchigdanzan. Student achievement is at the core of everything he does at UWSP.

The final piece of building a lasting home in Stevens Point, in 2010 Gonchigdanzan applied for naturalization and became a legal U.S. citizen.

“It was one of the happiest moments in my life,” he said.

Asked if he had achieved the American Dream, he didn’t hesitate: “I would say yes! It’s the land of opportunity, it’s the truth.”