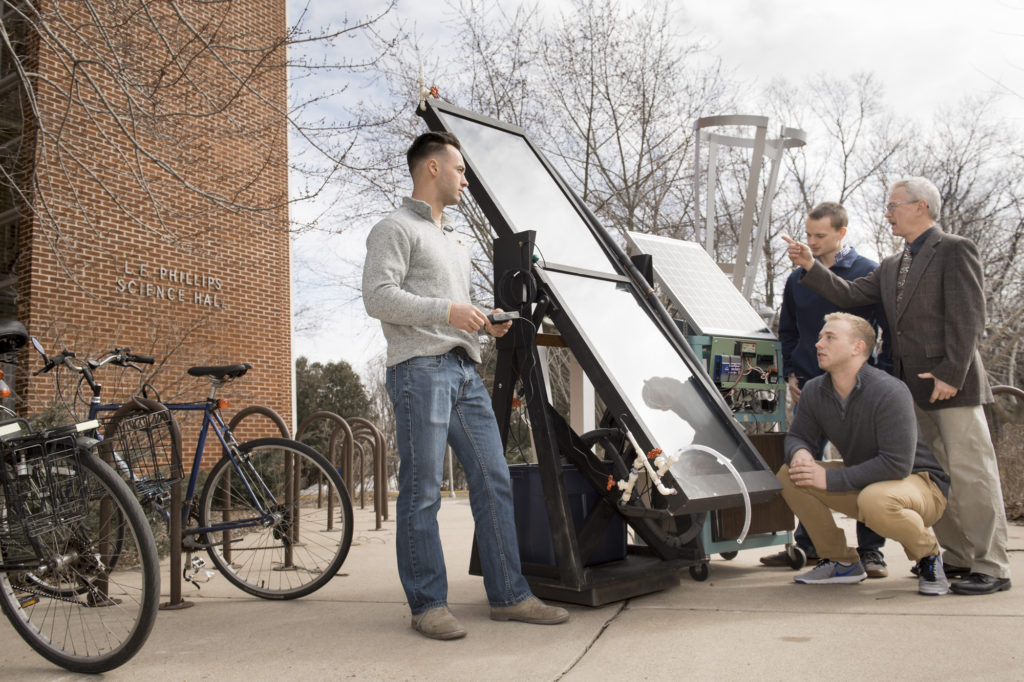 When Dr. Kim Pierson began teaching a new class about renewable energies, he used some inexpensive materials he found at a local store to build a small model of a solar thermal water heater that he could use in his laboratory.

The UW-Eau Claire physics professor quickly realized that his model — if built to a much larger scale — actually has a lot of potential for use in the real world.

After a few stops and starts, mostly due to time constraints, last summer Pierson pulled together a team of two students to begin building a larger prototype of his model solar-powered water heater.

Their goal is to develop a low-cost, lightweight solar water heater that can be used to preheat hot water for electric and gas water heaters, and to provide hot water for ground-source heat pumps to heat buildings.

“Our design is theoretically three times more effective than the solar panels on the roof of Davies Center that provide the energy for hot water in that building,” Pierson said of the faculty-student collaborative research project.

Earlier this month, Pierson and the students wheeled their creation out of their lab in Phillips Hall and into the early spring sunshine to test it for the first time.

While the test run showed that work remains, it also showed that the team has many reasons to be hopeful.

“It looks very, very promising,” Pierson said of the prototype. “It looks really good. It’s working much better than I’d ever thought it would. Right now, our calculations show that its efficiency is 70-80 percent, which is utterly amazing to me.”

“The main gist of our project is that it is a solar-powered water heater that we are hoping to use with a heat pump — basically an air conditioner in reverse — to heat homes and businesses, and be used for residential hot water,” Kwick said. “By replacing the usual geothermal or underground water loop with the solar thermal panel, we can reduce the cost of installation, and make it more readily available for homes that are already constructed.”

That it could work with existing homes is especially exciting because it offers opportunities that don’t currently exist in the marketplace, Hermes said, noting that geothermal systems are installed below ground so they are mostly limited to new construction.

For example, the UW-Eau Claire team uses a dual-wall polycarbonate panel instead of the copper fins other solar-powered thermal panels use to collect the thermal energy and transfer it to the water in a pipe, Kwick said.

“By using dual-wall polycarbonate with a surface that absorbs a large amount of the thermal energy, it makes it much more efficient,” Kwick said. “This is because the energy only needs to traverse the thickness of a single polycarbonate layer, not the length of the fin. Having it be polycarbonate also allows it to be more resistant to cracking in the colder climates of the Midwest.”

While solar power continues to grow as a source of renewable energy, commercial solar panels are still expensive, Pierson said.

So by using Wisconsin-made polycarbonate panels that cost just a few dollars, they can bring the costs down, making it a much more affordable option for people and businesses, Pierson said.

“I can get these $40 panels from an Eau Claire store,” Pierson said. “They are strong and cheap so that makes the entire project inexpensive and efficient.”

After the testing, the team decided to purchase and install a larger pump to address some issues they identified, Kwick said.

More testing is necessary to determine if the glue they use to secure the thermal panels will hold over time and in varying temperatures, Pierson said.

Still another challenge facing the project team is the size of the prototype. Because they have to be able to get the panel into an elevator and out the doors of Phillips, they are limited in how large they can make it.

If they can continue to test and enhance the prototype, Pierson said his hope is that in two years he can pursue funding to take the project to the next level.

“Our goal is to someday get it to the point where we could sell it,” Pierson said, noting there is still much to do before they can move from the proof of concept stage to commercial project status.

Regardless of where the project ends, the students say they appreciate the opportunity to put to use the skills they mastered in their physics classes.

“Dr. Pierson has spearheaded many different research projects, and has a knowledge of many physics subsections,” Kwick said. “We have gained a lot of experience due to the different things we need to know to make the panel work at its best.”

For example, the students had to figure out the mechanics of building a stand that would allow them to adjust the panels in ways they could more successfully harness the sun.

They also had to study fluid dynamics to understand the flow of the water through the panel, and to determine which speeds and direction of flow will allow for the greatest temperature increase.

Finally, they needed to understand electronics, Kwick said, so they could understand and design the different power supplies as well as understand how to get the data from their different sensors.

“We’re taking a lot of theories we learned in class and using them in real life,” said Hermes, who hopes to work in the green energy field after he graduates. “It’s super cool to see if what we are doing really works.”

Equally important, Hermes said, are the troubleshooting, teamwork, planning and documenting skills they learned through the project, all skills that will serve them well in the future.

Buck said that the renewable energy physics course that Pierson teaches, along with his work on the solar project, have helped shape his future goals.

“Mostly due to that class and Dr. Pierson, I now have a strong desire to work and develop green energy technologies after I graduate,” Buck said.

While he appreciates the impact the project has on the students, Pierson is quick to note that they aren’t the only ones who benefit when faculty and students work side by side on research.

“I might come up with an idea, but the students come up with their own ideas that often are better than mine,” Pierson said. “They learn to not only develop the ideas, but also to communicate them to me in a way that convinces me their idea is better. Students bring new perspectives to campus, so they often come up with ideas or questions that nobody has thought of before.”