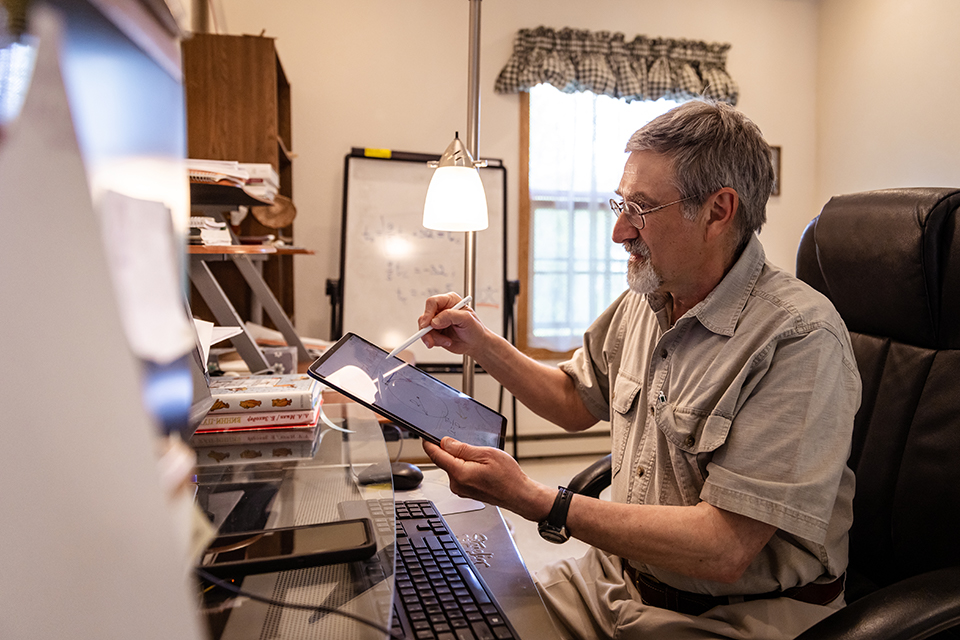 Like many Americans, Michael Waxman watched from afar with a heavy heart and a nagging question in his mind as the war in Ukraine unfolded. “What can I do to help?” he thought.

“It just broke my heart and I wanted to do something to help those kids,” he said. “There isn’t much I can do with money; I’m not a rich man. But I realized that perhaps I could try to teach them something, provide some routine and reassurance – something from their pre-war past to help them get to a healthier psychological state.”

While his accent might imply otherwise, the University of Wisconsin-Superior physics and chemistry Ph.D. professor from Siberia has no direct ties to Ukraine – only a heart for its people and a desire to make a difference.

With the idea of becoming a tutor for Ukrainian children in mind, Waxman asked his wife what she thought about him advertising free services on Facebook. She said, “I think you should do it.”

Within days, he had been contacted by several interested Ukrainian students. Their circumstances and locations varied widely, but all had one thing in common. They had fled cities in war-torn Ukraine – their education and lives abruptly interrupted and forever changed.

While his original intent was to tutor only a few children, Waxman’s experience with one of his first students opened his eyes to the scope of need.

“One of my first tutoring students was a boy still living in Ukraine. He and his family left their home in Kyiv for a location near Nizhyn, and he was looking for help with physics. I told him he would need to go to Nizhyn to pick up a textbook for our lessons. He said, ‘No, I will not go there. There is street fighting and I am afraid.’ That conversation was eye opening for me, so we figured out a different solution. But after a couple weeks of online tutoring, his mother, who is a psychologist, sent me a message telling me that since the war began, they hadn’t been able to even recognize their son. He couldn’t sleep; he was afraid of loud noises, and had he become very withdrawn. She tried to talk to him, but nothing was helping. She said since I had started tutoring him, he had begun to return to his pre-war self. Before the war, he loved learning about physics. Now that interest had returned. That affected me deeply. I thought if I, a physics professor, could do this for one Ukrainian child, then how could I find others to join me and reach more.”

That encounter inspired Waxman to contact Vitaly Vanchurin, a former physics professor from the University of Minnesota-Duluth and currently a research professor at National Institutes of Health, with an idea to create “Tutoring Without Borders,” a grassroots nonprofit initiative matching online tutors with Ukrainian students. Waxman’s son helped him create a logo and website, and Vitaly’s son did most of the programming. Within weeks, nearly 400 students had registered and 150 tutors volunteered to teach.

Through Waxman’s new organization, Ukrainian students from first grade through college can sign up to receive tutoring in any subject area. They are then matched with tutors based on needs and preferred language. Lessons are individualized to meet the needs of the students, ranging from one-time help to ongoing group classes or one-on-one sessions.

“I urge anyone who is interested in becoming a tutor to sign up on our website,” Waxman said. “You don’t have to be a college professor and you don’t have to speak Ukrainian. Elementary and high school teachers can help, as well as graduate students, college instructors and almost anyone who has a desire to teach and some subject matter expertise. Right now, we have 70-80 unfulfilled tutoring requests – some for lessons in Ukrainian language, others for English, German and Italian.”

One of Waxman’s students, Peter, was able to leave Ukraine before the fighting started and is currently in the U.S. While traveling and getting settled, he had no access to school, but knew it was important to keep up with his studies. His sister saw Waxman’s post on Facebook and told Peter about it.

“I’ve been studying physics, chemistry and math with Dr. Waxman for about a month now and it’s definitely been very good for me while I’ve been in limbo with my education,” he said. “Some of the things we’ve covered are review and some is new. It may even put me ahead with my education in the future.”

Waxman has recruited several of his colleagues to serve as tutors and to help promote Tutoring Without Borders, including Dr. Sergei Katsev, a physicist from the University of Minnesota-Duluth. He hopes word will spread and more will join the effort.

“I estimate there are about a million displaced Ukrainian children and about 20 percent who would like to receive tutoring,” said Waxman. “They are so hungry to learn and so appreciative. One of my students contacted me before a tutoring session and said, ‘Dr. Waxman, it’s still an hour until our lesson. How can I possibly wait that long?’ I can honestly say that in my 30 years of teaching, I’ve never had a student say that,” he laughed. “This has been one of the most rewarding things I’ve ever done.”

To learn more about Tutoring Without Borders, register a student, or become a volunteer tutor, visit tutoringwithoutborders.org. Currently, tutoring is only available to Ukrainian citizens.