Bringing the Universe to Wisconsin presents at UW-Platteville

PLATTEVILLE, Wis.­­­ — Six University of Wisconsin-Platteville graduates returned to campus to present their experience living in Antarctica and working on the $280 million project, Wisconsin IceCube Particle Astrophysics Center for the National Science Foundation.

IceCube was primarily a physics collaboration, but required engineering components with constructing the infrastructure, machines and tools used for studying particles within the Antarctic ice. UW-Platteville graduates built equipment such as the hot water drill used to carve large holes approximately two miles deep into the ice, and also built new computerized telescopes called Digital Optical Modules that are placed in these holes to detect the tiny particles called neutrinos.

The presentation was welcomed by UW-Platteville staff, faculty, students and Platteville community members.

“I was really impressed with how many people came out to see us and check out the project,” said Jeanne Edwards who graduated from UW-Platteville in 2004 with her bachelors in electrical engineering. Edwards was part of the IceCube project from November 2004 to January 2005. 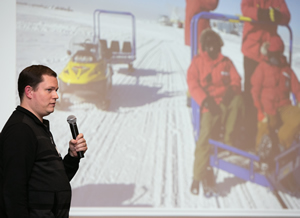 Mike Kleist, a UW-Platteville alumnus, offers some information about the IceCube project.

“This project demonstrates that Wisconsin has the educational facilities and students who are capable of completing a project of this magnitude,” said Jerry Marty, a 1969 UW-Platteville industrial technology graduate. “Wisconsin students have the talent for projects that are extremely complex and have never been done before in the most inhospitable locations on earth.”

Since neurtinos are nearly massless and are eclectically neutral, they are capable of passing through most matter, including earth. This makes them excellent messengers, carrying information like solar explosions. Neutrinos travel from the edges of the universe and stream through the ice at the South Pole, which houses the IceCube Neutrino Observatory.

“The presentation was interesting and worthwhile. I can’t believe how much time everything took and the large scale machines they used to study these neutrinos,” said Nick Wagner, freshman geography major from Eau Claire, Wis.

The event consisted of several stations, including the neutrino detector simulator, which allowed a visual of life like neutrino sensors and an actual digital optical module or neutrino detector. There was also a backdrop of the South Pole and neutrino observatory for children to dress in the actual jackets, boots and face masks the scientists and engineers wear at the South Pole and small-scale ice drilling station where community members and children could drill through ice, imitating the hot water drill.

The exploration stations were then followed by the introduction of the UW-Platteville alumni who worked on the IceCube project and a question and answer session. 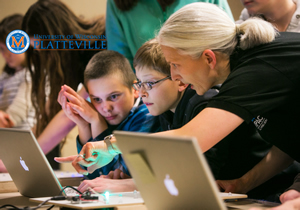 Jean DeMerit, a technical editor at the Wisconsin IceCube Particle Astrophysics Center, works with young students during the event at UW-Platteville.

Jim Madsen, UW-River Falls physics professor and associate director of outreach and education at the Wisconsin IceCube Particle Astrophysics Center encouraged the audience to stay hungry for knowledge, and maybe some day, they can become scientists who study large scale science.

“This is the first I’ve heard about dark matter and neutrinos, and how our perceptions of space could dramatically change because of what scientists are learning with the IceCube project,” said Garret Wernecke, a sophomore electrical engineering major from La Crescent, Minn.