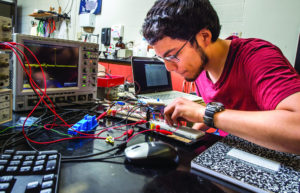 This 2018 UW System Economic Impact Study updates a 2002 economic impact study for the UW System done by NorthStar Economics of Madison, Wis. The 2002 study reported an economic impact of $9.5 billion on the Wisconsin economy. It also estimated that UW System economic activity supported or created 150,000 jobs and generated $408 million in local and state tax revenue.

Since that study, the UW System has grown in enrollment, research activity, economic development engagement, and educational programs and outreach. The breadth of UW System activity is striking. The UW System has a presence in every county in Wisconsin and its graduates live and work throughout the state.

This study was completed by researching and compiling spending data from UW System activities for the 2016-17 fiscal year in the following major areas:

In this study, the overall economic impact of the UW System ($24 billion), the jobs generated or supported (nearly 167,000), and the amount of taxes generated ($1.1 billion) are explained in detail.