Michelle McQuade Dewhirst received a Bachelor’s degree in music education and horn performance from Ithaca College and completed her master’s and doctoral degrees in music composition at the University of Chicago. As Professor of Music at the University of Wisconsin-Green Bay, she teaches courses in music theory, music history, composition, horn, and popular music. Her music has been performed across the country by such ensembles as the St. Paul Chamber Orchestra, the Pacifica String Quartet, eighth blackbird and Transient Canvas, as well as acclaimed performers Michael Hall, Holly Roadfeldt, Megan Ihnen and Allen Theisen presents…, and Juxtatonal. She is a founding member of a very small consortium, an ensemble dedicated to the performance of “miniatures” that last one minute or less or that consist of one hundred or fewer notes.

In September of 2014, Michelle was a finalist in the Iron Composer competition, in which she placed second and took home the “Audience Choice” award. In September of 2015, she embarked on the Piano Per Diem project, for which she composed one new work for piano each day for 30 days. A new interest in silent films has yielded two projects so far: scores for Metropolis (1927) and Man with a Movie Camera (1929).

An active and versatile horn player, Michelle is currently Principal Horn with the Weidner Philharmonic and the Manitowoc Symphony, as well as a horn player and occasional vocalist with Vic Ferrari’s Symphony on the Rocks (a rock orchestra).

I believe that my job as an educator is to give my students the tools to engage with music in the ways that are most fruitful for them, and to help them widen the lens through which they see music so that they may expand their own understanding and worldview. In order to do this, I must continue to broaden my own understanding through a process that consists of a healthy balance of learning and unlearning. 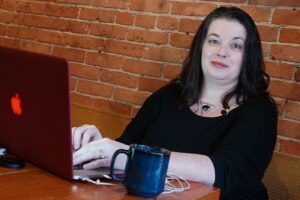