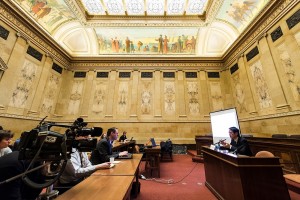 The North Hearing Room in the Capitol is used by the legislature for public committee hearings. (Photo by Jeff Miller/ UW-Madison)

The UW System is also an active participant in the work of a number of national higher education associations such as AAU, APLU, AASCU, CASE, ACE and AAC&U.

UW System employees and students can learn more about being involved in political campaign activities in the upcoming election year.