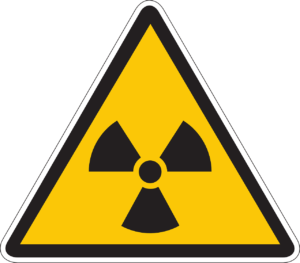 Radiation is the emission of energy that travels through space or matter. Light, radio and microwaves are types of radiation called non-ionizing radiation. In contrast, ionizing radiation is produced by unstable atoms and has an excess of energy or mass or both. Ionizing radiation has sufficient energy to cause an atom that it collides with lose electrons, or ionize. This electron displacement may lead to changes in living cells.

Given this ability, ionizing radiation has a number of beneficial uses, including treating cancer or sterilizing medical equipment. However, ionizing radiation is potentially harmful if not used correctly, and high doses may result in severe skin or tissue damage. It is for this reason that commercial and institutional uses of the various types of ionizing radiation are strictly regulated at both the state and federal levels. Ionizing radiation types may be either electromagnetic, such as gamma photons and x-rays, or particulate, such as alpha particles, beta particles and neutrons.

Sources of and exposure to ionizing radiation are primarily regulated at the federal level by the Nuclear Regulatory Commission (NRC) under 10 CFR 20 and at the state level by the Wisconsin Department of Health Services (DHS) under Wisconsin Administrative Code Chapter DHS 157. Occupational exposure to ionizing radiation is also regulated by OSHA under 29 CFR 1910.1096. The Wisconsin DHS issues general or specific licenses to individual campuses that work with radioactive materials, which require the implementation of robust radiation safety programs, including policies for the proper use, storage and disposal of licensed radioactive materials at each campus or facility. In addition, the Wisconsin Department of Safety and Professional Services (DSPS) administers the licensing of radiographers and x-ray machine operators.

This publication was prepared for environmental, health and safety staff at University of Wisconsin System campuses, to assist in finding resources and information for regulatory compliance. It is not intended to render legal advice.