Biography of Erroll B. Davis, Jr. 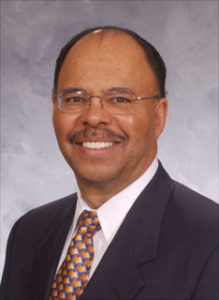 The Erroll B. Davis, Jr. Achievement Award, given by the UW System Administration and funded by an endowment contributed by Alliant Energy Foundation in 2006, was established in honor of Erroll B. Davis, Jr.’s leadership in both the corporate world and in the realm of public education.  Davis is the first black leader of a “Business Week 1,000” company and has a special connection to the University of Wisconsin System as a member of UW System Board of Regents from 1987 to 1994.

Erroll B. Davis, Jr. joined Alliant Energy in 1998 as president and chief executive officer, and began serving as chairman of the board of Alliant Energy Cooperation- an energy holding company with $8.3 billion in total assets and annual operating revenues of $3 billion at that time- in 2000.  Prior to the creation of Alliant Energy, Davis served as president and CEO of WPL Holdings from 1990 to 1998. From 1978 to 1990, he rose through the senior management ranks at Wisconsin Power and Light Company, starting as vice president of finance and ending as CEO and president.

Davis retired from his dual roles as president and CEO of Alliant in July 2005 and retained the chairman’s post until his move to the University System of Georgia in 2006.  Serving as Chancellor to the University System of Georgia, Davis was responsible for the state’s 35 public colleges and universities, approximately 302,000 students, 40,200 faculty and staff, and an annual budget of approximately $6.3 billion.  In July 2011, Erroll B. Davis, Jr. was appointed interim superintendent of Atlanta Public Schools, a system of 50,000 students and 6,000 employees with an annual operating budget of $578 million.  He served in this capacity until 2014.

Davis’ higher education experiences includes the previously mentioned service as a member of the University of Wisconsin System Board of Regents and as a former chairman of the board of trustees of Carnegie Mellon University, of which he is a life member. A native of Pittsburgh, Davis earned a bachelor of science in electrical engineering from Carnegie Mellon University in 1965, and an M.B.A. in finance from the University of Chicago in 1967. He is a member of the board of directors of General Motors and Union Pacific Corp., and serves on the Electric Power Research Institute (EPRI) board and on the advisory board of the Institute of Nuclear Power Operations (INPO) along with numerous professional associations and civic organizations. He is a former member of the U.S. Olympic Committee Board (2004-2008) and the University of Chicago Board of Trustees.

Davis and his wife, Elaine, established the Davis Family Foundation, which makes annual grants to numerous students. He is the recipient of numerous honors and awards, including recognition as one of Georgia Trend magazine’s “100 Most Influential Georgians,” the Atlanta Business Chronicle’s “100 Most Influential Atlantans,” one of the “75 Most Powerful Blacks in Corporate America” by Black Enterprise magazine, one of the “Top 50 Blacks in Technology” at the Black Engineer of the Year 2005 Awards Conference and the Carnegie Mellon Alumni Distinguished Service Award in 2004. Davis also was named one of the “50 Most Powerful Black Executives in America” by Fortune magazine in 2002 and received the Distinguished Alumnus Award from the University of Chicago’s Graduate School of Business in 1993, the same year he received a Bronze Medal in Financial World’s “CEO of the Year” competition. In addition, Davis was honored by the magazine U.S. Black Engineer as the “Black Engineer of the Year” in 1988.