“Why does my best flight option show a four-hour layover in Chicago?”

“I used to be able to get home by 3:00p, why are there no more afternoon flights at that time?”

“I went to this same conference in 2019 and the airfare was half the cost of what it is today. What happened?”

There is no shortage of articles explaining why there is a pilot shortage in this country. You can do a simple Google search if you want more details, but here is the 30,000 foot overview (pun intended)

All of this led to fewer and fewer people wanting to become pilots. While airlines are working on recruiting new pilots (setting up flight schools and drastically increasing pay), we’re a few years away from having the pilot shortage solved.

In the meantime, major airlines have replaced their retiring “mainline” pilots with regional pilots. This was, and has continued to be, a natural career path for pilots. (Mainline refers to larger planes flying between major cities. Regional pilots fly from smaller airports to the big hubs.)

Airlines pull pilots from the regional flights to replace their retiring mainline pilots and there is no pool of pilots to fly regional routes (like La Crosse to Minneapolis, for example).  Because of this, airlines are forced to limit service at regional airports or even stop servicing certain airports entirely. This happened in Dubuque, IA where there is no longer commercial service after American Airlines stopped serving the airport on September 7th this year.

As entry level pilots earn more (now in the $60,000/year to $90,000/year range depending on airline and home hub), airfares must increase. Additionally, the demand for the few remaining regional flights increases, causing fares to increase.

Below is a graphic showing some of the regional airports in Wisconsin and how the number of seat departures and arrivals has changed since Q4 2019. 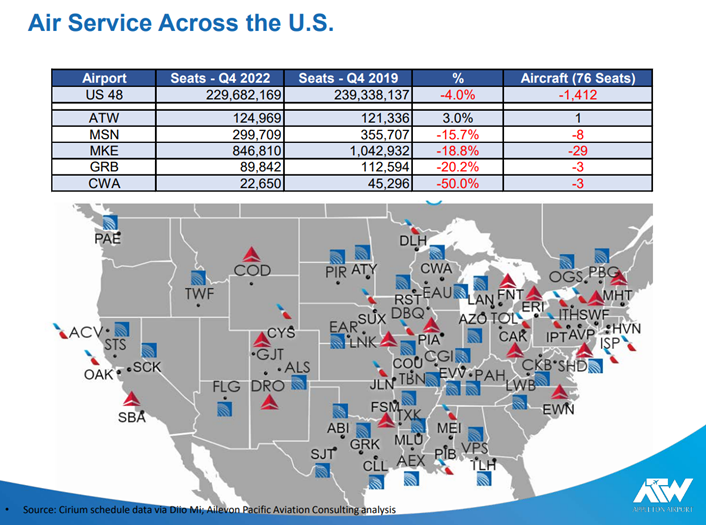