The mission of the Office of Federal Relations is to increase UW System’s visibility in Washington, D.C., build partnerships with Wisconsin’s congressional delegation and federal agencies, formulate and communicate federal priorities, monitor and analyze federal legislation and regulation, and support campus and student federal relations activities. 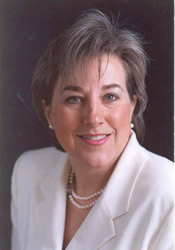 Kris Andrews is Associate Vice President for Federal and Corporate Relations for the University of Wisconsin System. She leads the UW System Office of Federal Relations. The mission of UW System’s Office of Federal Relations is to advance the education and research interests of the UW System in Washington, D.C. The Office of Federal Relations serves as a resource to national policymakers, including the Wisconsin Congressional delegation and federal agencies, as well as to national education associations headquartered in D.C. In addition, the Office of Federal Relations leads the UW System’s efforts to formulate and coordinate federal priorities, supports institutions through monitoring and analysis of federal legislation and regulation, and works closely with faculty and research administration to enhance research capacity and increase federal support for UW System institutions, students and Wisconsin. In her Corporate Relations role, she is responsible for building and strengthening existing and new relationships with the UW System and key business and industry leaders across the state of Wisconsin. She has risen through the national ranks in her field, too, as she serves as the Chair of the Advocacy Committee for the national Council on Undergraduate Research. Prior to joining the University of Wisconsin System in 2001, Andrews spent more than a decade on Capitol Hill as chief of staff for two members of the Wisconsin Congressional delegation, former congressman Scott Klug and former congressman Steve Gunderson. While working in Congress, Andrews staffed a congressional caucus that worked to formulate and implement bipartisan, consensus-based policy positions. Andrews is famed for launching innovative programs throughout her career. She worked with Sue Ann Thompson to establish the Wisconsin Women’s Health Foundation and went on to serve as the organization’s first executive director. Andrews served as an Assistant to Governor Lee Sherman Dreyfus. She earned her Bachelor’s Degree in Public Administration.

Research in the Rotunda